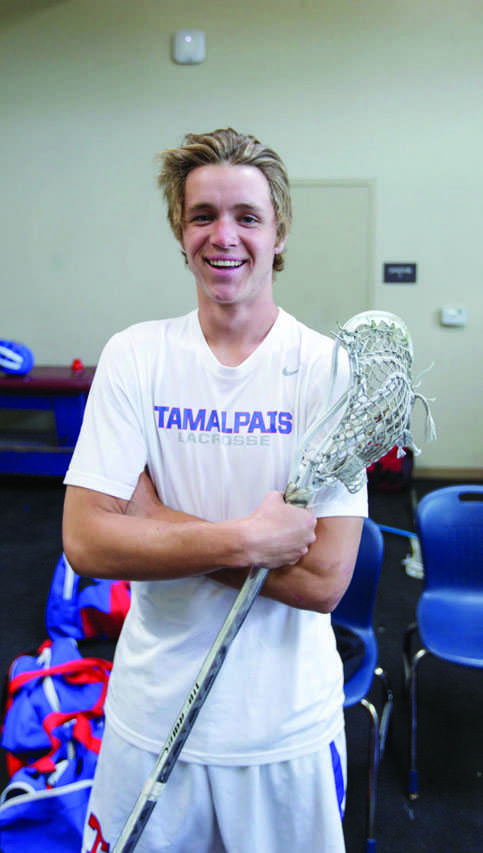 How does senior varsity lacrosse captain Jake Isola-Henry spend his time at practice? By making fart jokes of course. “We have this ongoing joke that one of coaches farted,” Isola-Henry said. “Like when Coach Matt is trying to give us tips on how to shoot, we are always like ‘oh what’s that smell Coach Matt, you farted!’”

While on the surface it may seem behavior like this would lead to dysfunctional team chemistry, his teammates and coaches actually see Isola-Henry’s antics as being beneficial. “Jake is a goofy guy, and is great at keeping things light when it gets too serious,” Head coach Scott Jennings said. “He’s a great barometer of the mood and sentiment on the team.”

Isola-Henry, who was voted a first team all-league defender in the 2014 soccer season, is the lacrosse team’s leader in assists and second in goals scored. Although the team remains well below .500, there are still plenty of exciting moments to play for. He cites a game against rival Cardinal Newman High School as one of these memorable triumphs. “It was sudden death and the game ended on a pass over the middle from me to Hank Taft who had a flawless finish to bring home an 8 to 7 [victory],” said Isola-Henry.

An unlikely one of these “memorable triumphs” from Tam varsity’s recent loss against Redwood on April 7. “We lost to Redwood 9-8, but Redwood beat us 20-1 last year and they are always one of the best teams in MCAL’s and NCS,” Isola-Henry said. “We came back after being down five goals in the fourth quarter, but we just couldn’t finish in the end. It was still a sick game.”

Although it was a loss in the standings, it proved to Isola-Henry that his team can compete going forward. “It shows how much we have improved. We do this every year, start off kind of shaky, then we really come together late in the season. And this game really proved that we can play with any team and we really needed that,” Isola-Henry said. “ Rivalries produce crazy stuff like this, I guess. And we fought hard all game especially when we were down five goals, so I think it shows that we have a lot of heart and I can’t wait for the games to come.”

Teammate Logan Salcuni remembers other games where Isola-Henry was not only the creator, but the finisher. “In this one game against San Marin, Jake went from the top, dodged around a dude, then another guy tried to lay him out and he bounced off and shot the ball right in the far left corner.” Salcuni also admires Isola-Henry’s unconventional, but effective shot. “He like, twirls himself,” said Salcuni. “He looks like a goon.”

With both his leadership and his technique, Isola-Henry has an original approach that the whole program has grown to love. “He leaves his mark not so much in words, but through action,” Coach Jennings said. “His ability to inspire his teammates has always been a wonderful thing to watch.”

Jake Isola-Henry knows his team is far from perfect, but that doesn’t seem to bother him one bit. “Sometimes we have a little bit too much fun out there,” said Isola Henry. “But that is what sports are all about right? Having fun.”