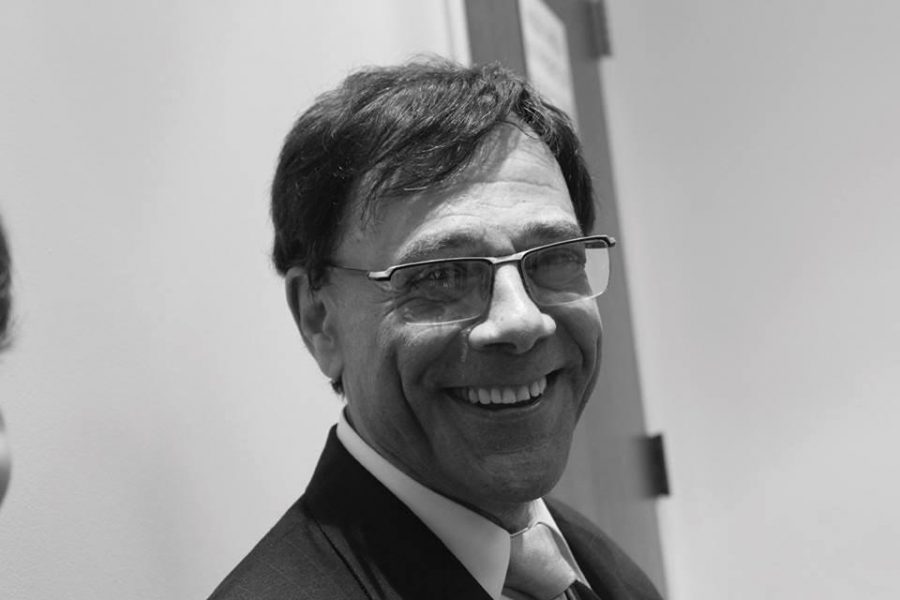 Vogelstein has worked with mock trial for almost 20 years. He led the team to two state victories in 2005 and 2009 and a national victory in 2005. Photo courtesy of: Avi Perkoff

“I’ve been crying about Mock Trial for the last month,” David Vogelstein, the head coach of mock trial said about his decision to step down from his position after 19 years.
“How long have I been thinking about a change? About a couple of months. In between February and March. Quite frankly, it’s scary because it’s a life-changing thing. I’ve been doing the same thing for the last 19 years, and it becomes habit. You become addicted to it, the kids give you so much, you become even more addicted to it,” he said during an interview at his house. Vogelstein motioned to a banner that read “Congrats Mock Trial Champions,” in reference to mock trial’s 2005 national win. “Thats been hanging here for 10 years.”

Vogelstein has worked with mock trial for almost 20 years. He led the team to two state victories in 2005 and 2009 and a national victory in 2005.Photo courtesy of: Avi Perkoff

“One of the reasons that I kind of stepped down as do-er of everything and being there all the time [was because] it was hard. It was hard because I was leaving my wife home alone 150 nights a year for 19 years. On my anniversary we were away [at a mock trial competition] for 19 years. Sometimes she came with us, but a lot of times she couldn’t.”
Aging was also a factor in Vogelstein’s decision. “[As] you get older…you’re looking at how much time do I have left on the planet…to do the stuff that I really want to do. To be an outrageous cowboy for good. I was looking at that and I was saying, ‘In 15 years I’ll be 80.’ I mean, I may be functional, I may be able to run around, there’s certainly 80-year-olds [who can], but I may not. So it gave me pause that there are some other things I want to do with my life, and I thought that this was the right time.”
Vogelstein plans cutting back on his time spent on mock trial and setting concrete boundaries.
“I’m not going to school…I will be in touch with the other coaches and give them any help they want. I will help the captains anytime they want. I will meet with the kids in my house on a regular basis if they want. If they don’t want to meet with me that’s fine,” he said. “I’ll be a part-time attorney coach. I won’t be running everything, I won’t feel obligated to run everything.”
Vogelstein is passionate about mock trial and believes that it has a multitude of life lessons to offer. “The ability to subjugate [personal drama] to push that away, for the team, is really good. You can get that from a basketball team, you can get that from a football team. What separates mock trial out is not the fact that it’s intellectual blood sport, it’s that in every over sport the coach is actively involved in the competition,” he said. “In mock trial coaches cannot say a word…the kids need to coach themselves and when weird [stuff] happens in the middle of a trial the kids need to be trained to deal with that and to become leaders…help their friends, take advantage of it, all these things that are life lessons.”
He believes that the lack of spotlight on mock trial, while disappointing, is actually beneficial to the students. “In order to get [coverage] you have to achieve super excellence, you have to get out of the county and [win] state….You have to get to that level to have any degree of recognition and that’s what bothers me a lot, that these kids win, they are excellent, they work so hard and yet the level of recognition is not what is deserved….The fact that we don’t get publicity is also a good teaching tool. It teaches you about life and about doing what’s right as opposed to what you get credit for.”
The dedication of mock trial students impresses Vogelstein. “It is really inspiring because in mock trial kids actually have to be better than real lawyers. Real lawyers don’t have to be 110 percent all the time, but mock trialers do because if you lose a round in county or state you are most likely out of the running for a championship run. You have to be better than perfect all the time.”
Despite not being head coach, Vogelstein still plans on contributing to the team. “The kids can come over to my house and for the new people, it will be good because I will be scarier for them and for the older people, it will be the renewal of a continuing relationship, which will be good,” he said. “There is no reason why we cannot be better than we were last year and we were great last year.”
While change, especially in leadership can be daunting, Vogelstein believes the team’s chances are undiminished. “Whenever there’s change in a championship team the sharks start circling the waters….and that’s going to happen with mock trial….And the truth of the matter is that it’s just swimming in circles, it’s not going to get them anywhere. Because these kids are grounded in what is needed to win.”