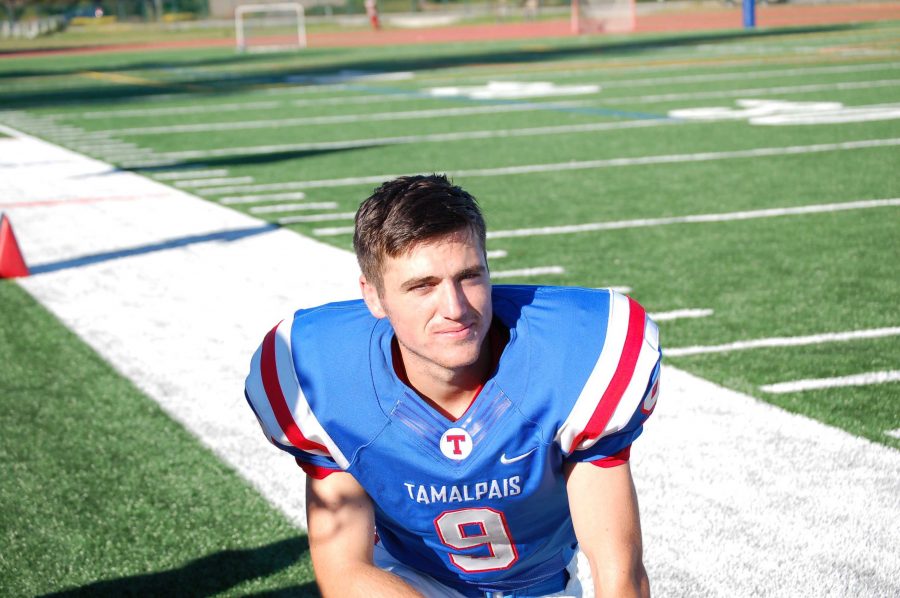 Senior Riley Walls jumped at the opportunity when the soccer season was switched from fall to winter. He saw an open slot for a sport and took it, deciding to kick for the varsity football team.

Walls’ older brother, two years his senior, had the original idea to kick for the football team and play two sports. However, since football and soccer were simultaneously occurring, this wasn’t an option. “I knew that as soon as soccer did move, that [Walls] may be interested in kicking and would be successful at it. And sure enough he is, and it’s cool to see,” said PE teacher and former soccer coach Dustin Nygaard.

“He talked to me last year about coming out and playing. I didn’t know if he was serious or not, but he came out and he’s been kicking for us, and he’s been doing a great job. So it’s really fun to have him on the team. He’s a super nice kid,” said head football coach and science teacher Jon Black.

Walls has contributed to the varsity football team through kicking field goals, extra points, and starting kick-offs. He helped the team out in a huge way on September 26, when he kicked a Tam all-time record 52-yard field goal in the first win over Novato since 2000. “It turned out to be the deciding point needed to win the game,” Black said. “It’s funny, when you line up the kick and you see it, you’re like ‘whoa, that’s a long way,’ but I was confident that he was going to make it. [There was] never a doubt in my mind.”

Walls was equally excited about the record he’d broken and the points he’d scored to help Tam to victory. “I’ve been kicking that distance in practice a lot. I [was] like, ‘okay, it’s my time, I just got to do this,’” he said. “When I hit it, it was just like all my hard work paid off…I’m glad I got those points on the board for my team.”

Other than setting records and helping out his team, Walls simply enjoys the experience of the football team. “There’s a sense of real brotherhood on this team, and in football in general I think. You’re out here fighting for eachother, and I’m just out here to help out my teammates and help out my school,” he said.

The varsity football team was happy to have him. Teammate and junior Jack Harris, who captains the team and plays quarterback, reflected on the effect of Walls’ presence. “Converting a soccer player to a football kicker is probably the best thing you can do. I mean, he came in and did a great job, day in and day out. He’s a great kicker, probably one of the best we’ve had in years,” he said.

Walls admitted that the difference in kicking a soccer ball and kicking a football was apparent and caused him some difficulty to get used to during the spring and summer practices for football.

“When I first was kicking out here in the spring and in the summer, I was pulling them way to the left, because I was treating it like a soccer shot, where you line up to the side, and you try to curl it. And so then, I took some shorter steps to the left, and made it more of a straight run up so it just went straight rather than hooking it or pulling it,” he said. “It’s funny, I wouldn’t necessarily say in soccer that I have that much of a boot. I mean, [with] kicking a soccer ball, I can kick it kind of averagely. But something about kicking a field goal, I’m just determined to make it through the goal post, [or] get it through the end zone for kickoffs.”

Walls did notice the inconsistency in the football kick and the soccer kick might have thrown him off a little bit for soccer season. However, he believes that the beginning of soccer season will get him back into shape of kicking a soccer ball.

After football, Walls looks forward to his fourth year on the varsity soccer team, as a captain for the second time. “Since last season and the disappointing loss against Redwood in the MCAL final, I’ve been eager to get back out there and show the rest of MCALs that Tam’s here to play,” he said. “Tam soccer’s been sort of my life throughout high school, and I’m always looking forward to the season.”

Walls attributes part of his success in soccer to being brought up in England. Walls didn’t move to the United States until seventh grade. He started playing soccer when he was three years old and started playing competitively at age five. “I’ve just been growing as a player ever since. I think England is what created my love for soccer. It’s the culture there, and coming here, I wasn’t really expecting much [with soccer], but I was definitely surprised in a good way, that the soccer here is so competitive, and I’ve definitely grown here as well,” said Walls. “In England [the style of play is] more direct and more aggressive, and you go for the long balls more rather than the short passes here. I think the main difference is just the style of play. Here, it’s much more short passes, possession style of play. In England, you need to get the ball into the goal and you do whatever it takes to do that.”

“He came in his freshman year….He was a part of the team, and over the next couple of years, really developed into a great player and a good leader,” said Nygaard.

Walls cherishes a favorite memory from his soccer season, during his sophomore year. “It was my older brother’s senior season, and him and I were center back partners together. We both were starting center back and it was the MCAL finals against Redwood, and we went up two goals…and suddenly in the second half, they went up 3-2. And in the last five minutes of the game, we scored two [goals] to win MCALs. And just being able to share that with my brother on one of his last high school games was super special,” he said.

Through both soccer and football, Walls realized he’d learned a lot. “The team is bigger than the individual I think in both sports. Now, I’m the kicker and I’m doing well individually, but the reason I’m doing this is because I want to help my team…For soccer, it’s the same thing, it’s not about how many goals you score or how many assists you get. It’s about the team results and how you grow as a team,” said Walls.