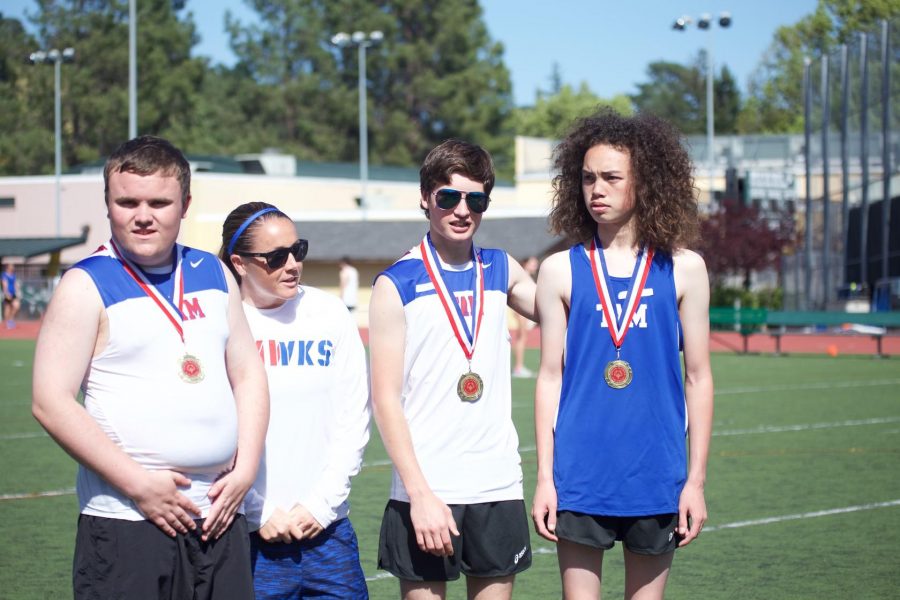 Michael Lovejoy, special education teacher said, “The meet was fantastic. Our team members had uniforms, just like the other people on the track team, met with their partners on the track, worked out their stretching routines and everything.”    Special ed students and track team members performed side by side in both the long jump and 100 meter events.

This is the first year that the special education class has participated in the Special Olympics. “It started about, at the beginning of the year,” Lovejoy said, “Five students; Courtney Chang, Brooke Butler, Dylan Harris, and Theo Andrews came to me and asked if there was a Special Olympics Team at Tam. I said no, so they had the idea to get one started. We checked with Redwood High School and Drake, and they had a similar type of club going on and they were just starting to work with Special Olympics United.”

After joining forces with the two other schools and recruiting the help of athletic director Christina Amoroso, who helped coordinate the logistics of the events, the students’ creation was complete. The Special Olympics United is different from the traditional Special Olympics events, as Lovejoy explained. “Special Olympics United works with general ed athletes, sometimes called partners and special education athletes,” Lovejoy said. The events take place with partners, one member of the general track team and the special education track team, working together to participate in the events.

Kyra Mowbray, teacher’s assistant for Lovejoy’s class and photographer at the event said, “I think that people were able to learn a lot from this event. While students with disabilities may not be in the same classrooms as us during the day, they are still our fellow students. Events like these can really bring our school and community together. Just like the Unified Sports Basketball game against Redwood, the crowd went wild for both teams. It was an outstanding moment to witness.”

There was a large turnout at this meet, which is unusual for track meets in general. Parents, track athletes from all three schools, and community members gathered together to support and enjoy the meet. “I saw great camaraderie. People with their arms over each other’s shoulders. People just happy for each other,” Lovejoy said. “There wasn’t really the stress of winning, just the idea of doing your best, and celebrating it with a team. The people from Drake, the hosts, were wonderful. People cheered for different schools- not just their own. So it really felt like a community coming together.”