Zootopia: A “Children’s Movie” for all Ages 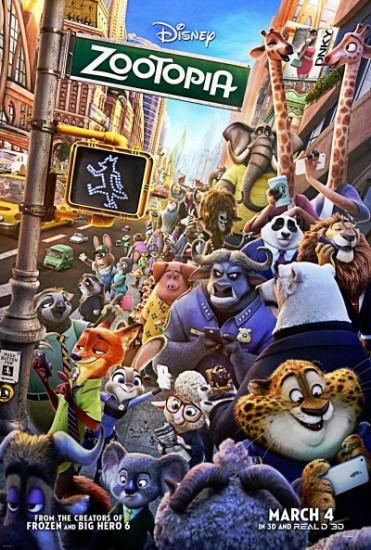 Welcome to the animated world where humans don’t exist, sloths drive sports cars, and a gazelle is a national pop sensation. Zootopia, a Walt Disney Production, hit theaters on March 4th, bringing in 73.7 million dollars in the opening weekend, and making it Disney’s most successful release. Although at first glance this one hour and 48-minute animation may seem nothing more than a day trip for the kids, it is a must see for all age groups.

The story follows a spunky bunny named Judy Hopps, voiced by Ginnifer Goodwin, who ignores her parents’ strong push towards carrot farming and sets off to become the first police officer bunny in history. As she journeys around the huge city of Zootopia she encounters a fox named Nick Wilde. While the rest of Zootopia sees Nick as a conniving, dirty fox, Judy gives him a chance, only to find out she’d been swindled. Later on, after a moment of high circumstances that endangers Judy’s job, she seeks out Nick to help her solve an impossible case. Due to Judy’s inherent smarts, Nick begrudgingly agrees to assist her and they both enter into the dangerous city of Zootopia.

What makes Zootopia such a relatable and comical film are the little details that you don’t see in the average animated feature. Sloths working the desks at the DMV, unenthused animal neighbors bringing home groceries to their rundown apartment, and a naturalist club where animals don’t wear clothes are just a few examples of fresh Zootopia humor.

But above all, the reason why this movie is such a gem is the ability to seamlessly weave current events into a “children’s movie.” There is definitely a strong message of racial inequality that parallels our current society. Refusing service to a fox at a restaurant and a muzzle closely resembling the iron bit are just a few instances that add a level of sophistication to the story.

Zootopia is funny yet dismal. It transports you to a whole new world yet reminds you of the things in your own. And most of all, after an adventurous ride filled with twists and turns, you will walk out of the theater rejuvenated. Jason Bateman’s role as Nick Wilde was outstanding, the animation was fresh, and the story, although following the classic Disney arch, hits you with a more truthful sense of reality.