Athlete of the Issue: Sabrina Haechler 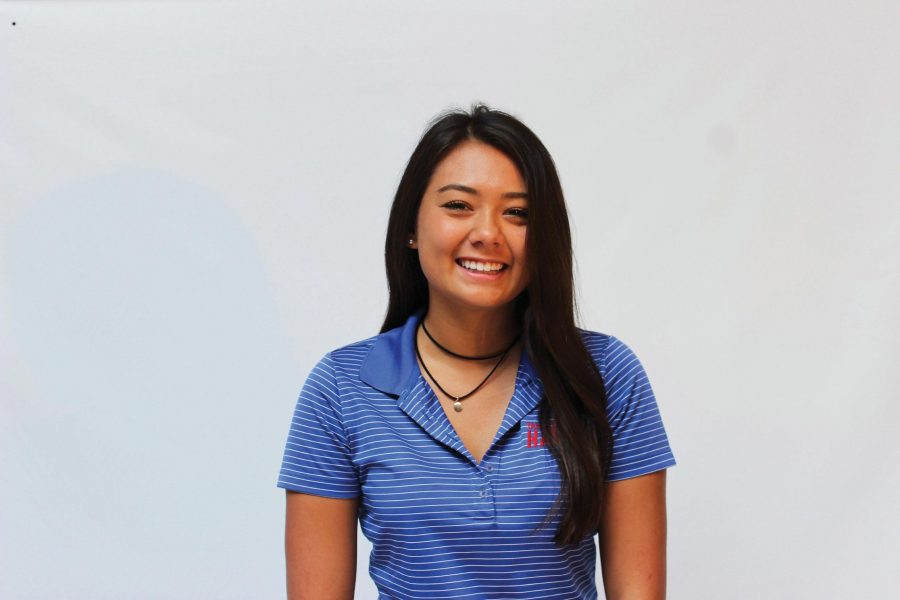 Senior girls’ golf team captain Sabrina Haechler started playing on the team her sophomore year, after playing volleyball her freshman year. Besides occasional trips to the golf course with her grandfather, she began her high school golf career from scratch. “I’d just go and hit the ball just to make him happy, because he really wanted me to be a part of the sport he loved,” Haechler said of her golf course trips with her grandfather. “He loves it so much, he still plays three times a week, eighteen holes, which is a lot.”

Haechler admitted that the transition from volleyball to golf was challenging. “It was really difficult, because it’s not as much of a workout and also I played volleyball since I was in third grade,” she said. “So, it was huge to start something new, and of course at the beginning I wasn’t very good….you have to really be patient with golf, it’s not something you can just pick up.”

However, after time and effort, Haechler has been able to learn the sport. “Sophomore year, I probably usually shot in the high 50s, and now I shoot in the mid 40s, which is a pretty good improvement,” she said.

Haechler also speaks highly of the team’s atmosphere. “I think that the golf environment is way more supportive than any other sport. Like, [in other sports] everyone in their head is like, ‘Oh, I’ve got to beat them.’ But when we go out and play golf, everyone’s always waving, asking how [everyone’s] doing,” she said. “We have practice twice a week because we have matches twice a week. Practice for me is just a way for our team to bond…To really get better, you have to go out and invest your time on the weekends to play golf. So, over the summer, I played for a month straight. I played every morning at six in the morning at Mill Valley golf club.”

This year, the golf team is poised to finish high in the MCAL standings. However, like last year, the Justin Siena and Redwood golf teams pose a substantial threat. “[Redwood’s] senior players are really good and they’re consistent. The best part about golf is if your team’s consistent, you’re going to win,” Haechler said. “Our team used to not be consistent. We would have people shooting in the 70s, 60s. But now, we got a lot better because everyone’s shooting in the 50s or 40s, which is really nice. So, [Redwood] has people always shooting in the low 40s, which is ridiculous.”

Before focusing on golf, Haechler used to be on the competitive slalom skiing based in Alpine Meadows.

“Skiing by far is my favorite sport. I just quit last year, and I was a competitive racer since I was eight, so it was a really big part of my life. I would travel every weekend….and so then when I tore my ACL freshman year, I thought that would be the end of my ski career, but I decided…I should go back out and try it one more time,” she said.

In the meantime, Haechler looks forward to the outcome of the golf season. “We actually thought we weren’t going to do as well, because we lost all our major players, but our returning players stepped up a lot,” she said. “[Freshman] Chloe [Jeamonod] was Athlete of the Week in the “Marin IJ,” so she went from a 70 down to a 47, which is really impressive. That’s a huge improvement.”

Tam head coach for golf, John Haight, believes Haechler has been a valuable resource for the team’s success. “Her leadership has set an example for the team that is invaluable and I could not be more proud or appreciative of how she helped me and the team this year,” he said.

Above all, Haechler hopes to be a positive influence to newcomers to the sport. “When I first went out and Courtney Chang and Maddie Stoops were so welcoming…I always will remember that, just because they were so nice,” she said. Stoops and Chang graduated with the class of 2016. “And now when we had four new freshmen come this year, I wanted to be there for them. I think having nice people, and people that are welcoming is a key thing.”