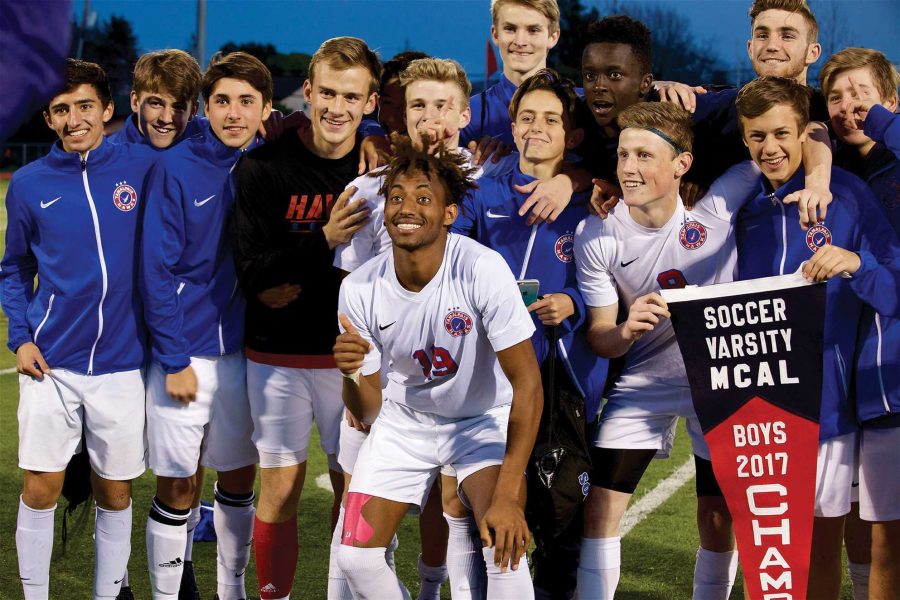 The boys’ varsity soccer team won the MCAL championship beating Terra Linda 3-0 on February 11. The team had progressed to the finals after beating Novato 1-0 in the quarter finals and beating Drake 4-1 in the semifinals.

“When we got the second goal, it definitely was confirmation that the game was over, but I never really felt that the game was in danger of swaying to them. So, I felt like they did a good job of managing the 1-0 lead,” head coach Spencer Stanton said. “There was no panic, which was a huge growth from earlier in the season where I felt like maybe at 1-0, we were a little uncertain of what’s going to happen.”

Following a hard fought game, the team was overjoyed. “We fought the whole season for it, and it was the best feeling ever,” senior and team captain Patrick Knauer said.

Despite the excitement surrounding the MCAL title, the Hawks did not make it nearly as far in the NCS playoffs, losing the first game 1-0 against Montgomery on February 15.

Stanton reflected on the regular season and how the team made it to the MCAL championship game. He noted a strong start to the season, citing wins against Drake, San Rafael and Redwood, but also recognized a weaker middle of the season, based on an unlucky streak of team illness.

Then the team started to heat up. “Looking at the season now, I feel like that was better, because then once we came out of it, we started to peak at the right time,” Stanton said. “Ultimately, during sports, you want to be peaking during playoff time because that’s when it matters.

“For me, [winning the MCAL Championship title] was more relief and verification that what we were doing was right. I think for the players, all their hard work had paid off and I think they felt that sense of ‘hey, we did it, we did it as a group, and we pushed through our doubts, and ultimately, we won the league,” Stanton said.