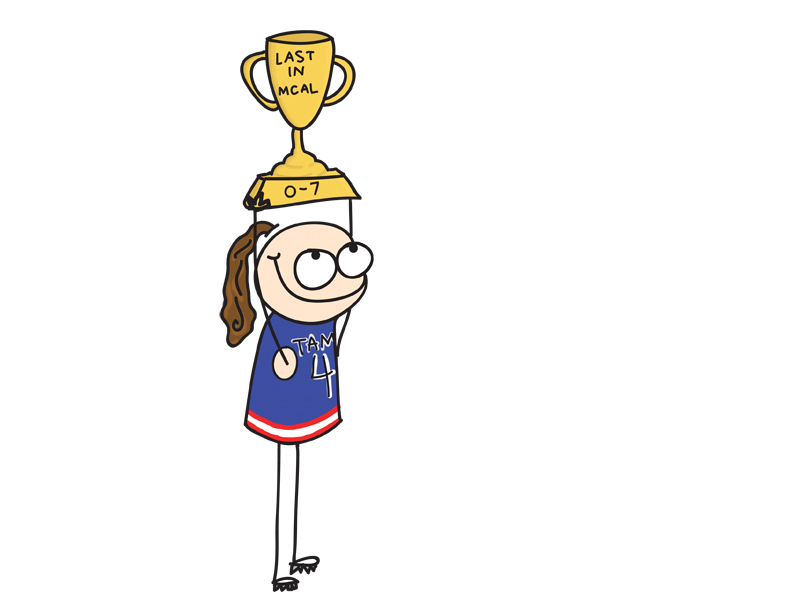 Imagine this. You spend two hours after school practicing every day. You play your heart out in every single game. You condition, train, and drill, trying tirelessly to get better. And in return for all your work, you’re faced with empty bleachers at every. Single. Home game. Which is ironic, considering how much people rave about Tam’s great “school spirit” and support of athletics. Your sport is constantly the butt of everyone’s jokes.  People laugh in your face when you tell them what sport you play, or how your season’s going. This is the reality for Tam Girl’s lacrosse

After two years on the varsity team, I now know that as the days of spring sports approach, so does the constant cracking of jokes, sly insults, and unfair treatment to my teammates and I. We even get delegitimized by the Tam News. An example of this can be found in the By the Numbers section. While for most teams the best statistics of the season are used, for us they used the number of goals scored AGAINST us in our first few MCAL games of the season. The unfair treatment has been shown in previous years in our lack of field space when we play in the space between the softball and baseball fields, or more commonly known as the “buttcrack.” It was honestly shocking when we do get to play in real daylight AND on a real field in the same practice. We often had practice in the cold winter months from 5-7, and we even had a few practices later than that so far this year. I’m assuming you’re all wondering, how can you play lacrosse in the dead of night. Well, I’d say it’s difficult. Especially since the game is played with a very small, hard ball that is both hard to see and is VERY painful to be hit with. Although the lights on the field may be adequate for soccer, a lacrosse ball is about 1/10th the size of a soccer ball. Which makes it about 10 times harder to see.

And yes, I will admit, we may not be Tam’s strongest athletic team. Last year I believe we didn’t win any MCAL games, and won two league games. Our league, however is extremely challenging and  fefeature teams such as Novato High School, who are currently ranked as the number one team in California. Along with Navato,  we face intimidating teams such as Redwood and Marin Catholic.

The main cause for this imbalance in skill level between our school and the other schools in our league is the lack of year-round dedication from Tam players. Before this season, we had one, and only one girl who played lacrosse for a club team outside of the high school season. The rest of us basically dropped our lacrosse sticks in May and picked them up again in February, aside from the occasional pre season open field or casual pass around. And while we were doing this, the majority of girls, if not all of them, from other teams in our league were playing on competitive club lacrosse teams for the fall and winter.  Most of them also came into high school lacrosse with a few years of experience under their belts, while during the duration of my experience at Tam, our team has been made up mostly of girls who could have confused a lacrosse stick with a baseball bat before their freshman year. We never had a team full of girls who have had the basics down, and therefore couldn’t focus on getting better in the ways the other, advnaced teams can. Basically, we were still learning how to play, while they were getting better and better.

But this is all about to change. This year we have a large group of incoming freshman who have all played club lacrosse and are going to make a huge difference on our team. We are also introducing a junior varsity team, to start to build up the program. A mix of experienced girls and a junior varsity team will mean an eventually much stronger varsity team that can hopefully combat dominating forces such as Redwood and Marin Catholic.

As we get better, I am hoping to see a change in attitudes towards us from the Tam community. This year we are already getting more equality in practice times with soccer and the boys lacrosse teams. While this is great (and good for our safety), the real change we are looking for is in one from the students. If for once, we had a few people in the bleachers that weren’t from the opposing team, this would add a lot to the moral of the team and hopefully improve the way our team is viewed overall.

No matter how much fun is made of us, we are team, just like the ones many of you reading this are a part of. And we deserve to get a chance to prove ourselves.