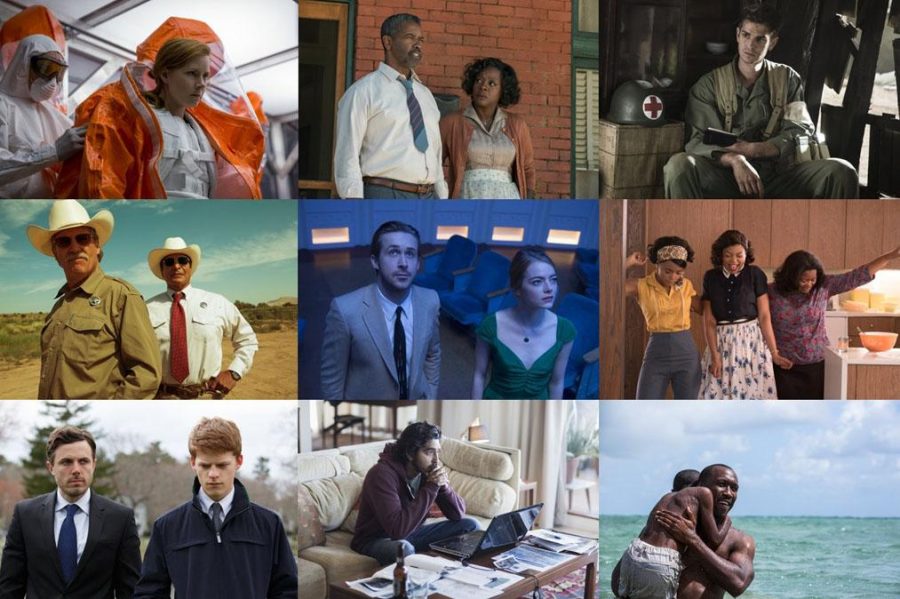 Moonlight came out as the Best Picture winner after some awkward confusion on stag
e. The film follows the life of a black and closeted gay man growing up in the projects of Miami, befriending a drug dealer as a kid and coping with school bullying and his single mother’s addiction as he grows up as a teenager. Moonlight is told in three parts and uses three different actors for the same main character, Chiron, focusing on him as a boy, ateen, and an adult.

Director and writer, Barry Jenkins, was originally from Miami, where the movie is set.  The film based on an unpublished play by

Jenkins’ co-screenwriter. This was his first widely-acknowledged film both as a director and writer.

However, despite winning best picture, it was the least financially successful of the other nominees, domestically grossing just $21.3 million according to Business Insider.

The cast was an extremely crucial part of the films critical acclaim. Mahershala Ali, who won the Oscar for Best Supporting Actor in Moonlight, is most well known for his role in House of Cards, where he plays a wealthy and influential politician, an extremely differentrole. In Moonlight, he was able to show his skill and diversity as an actor in his role as a drug dealer dealing with his own personal struggles and becoming an important father-figure for the main character. Naomie Harris showed her skill as an actress, in a role that would have given her an oscar nearly every other year. But 2017 was a competitive year foractresses. Trevante Rhodes and Ashton Sanders helped contribute to one of the greatest all-around casts ever seen in a film, as they depicted struggle in different ways, but both played the same character, helping to make the film more predictable.

Moonlight is about identity. It’s not just about racial or LGBTQ+ struggles. It’s a film for anyone having trouble fitting in and for people that put on a mask everyday, hiding their true selves. Moonlight also ties that in with its surface-level messages regarding current status of African American poverty in cities.

Moonlight was the most powerful film of the year and its Best Picture win at the Academy Awards wasn’t a  surprise.

MANCHESTER BY THE SEA

Manchester by the Sea, directed and written by Kenneth Lonergan, It’s a gripping story of  how a family copes with tragedy. Along with the Best Picture nomination, the film won the oscar for Best Original Screenplay.

The phenomenal cast, including Lucas Hedges, Casey Affleck, and Michelle Williams, plays extremely difficult roles while their characters cope with loss, tragedy, and painful awakenings of the past. While Casey Affleck’s performance was consistent throughout movie, I felt the best  performance in the film was by  Michelle Williams. Though not recognized by the Academy due to large competition in her field, her emotionally intense performance would have been an Oscar confirmation nearly any other year.

Manchester by the Sea unravels the story in a nonlinear way, adding flashbacks to enhance the script and pad character development as well as helping to add to the intense nature or cultural history of a scene.

ted from the Pulitzer and Tony Award winning 1987 play by August Wilson, is an example of how simple movies with a minimal setting should not be underestimated. The film  follows the story  of a 1950s African American family struggling in their lives. Fences focuses on Troy, the films father figure, played by Denzel Washington. Troy is clearly the best and most layered character in the movie and arguably the most interesting character of the year.

Even though Fences was an incredible movie, it lacks engaging dialogue. The dialogue of the movie has a captivating effect on the audience. What makes Fences unique from the other nominees is the story is almost entirely based on dialogue. Character development is done through dialogue, and that’s why the casting was so crucial in this movie.

Since the setting of the film was so minimalistic, there was an extensive focus on the characters and their development. As it was following a play, there were only seven characters throughout, all playing important roles and all helping to create a very monumental cast. Most notable of the skillful cast includes the role of the husband and wife, played by Viola Davis and Denzel Washington. They have extremely difficult roles to play as their relationship evolves throughout the film, and their success makes it all the more riveting of a movie to watch.

Lion tells a story of an epidemic in India through the lens of a singular true story, about a boy who gets lost in India, ends up at an orphanage many miles from his home town and ends up adopted by a relatively advantaged couple in Australia. The screenplay was adapted from Saroo Brierley’s own memoir recounting his journe

y and Lion is based on Saroo’s story.

The heart of the story takes place as him as an older teen attempting to find where he came from in India. Though the story sounds like a cliché “finding home tale,” it’s far more than that. It centralizes on themes of privilege and guilt. It presents constant contrast between the life of India and Australia and Dev Patel’s superb acting help gets these ideas across.

The acting in Lion helps it become one of the greater films of 2016. Patel, most notably puts out another great performance, comparable to his performance in Slumdog Millionaire. However, due to Patel, Nicole Kidman’s performance is often overlooked, and the success of her achievements in the role were a key part to the film.

Though Lion won no awards, it cannot be underestimated. It is among the greatest and most important films of the year.

Hell or High Water was one of the most underrated films on the best picture list this year. It went highly unnoticed, it wasn’t nominated for many other Academy Awards, and didn’t manage to win a single one. However, the movie should not be overlooked. Set in rural Texas, it focuses on two bank robbers and later on two investigating Texas Rangers. With a storyline like that, the plot could easily have become corny and similar to an old-fashioned Western. But it’s expertly done, and it keeps firm ground in believability. Everything abou

t the film is unexaggerated, making it feel much more real and entertaining.

Hell or High Water is well casted, with Jeff Bridges most notable in his performance. Chris Pine, Ben Foster, and Gil Birmingham help to successfully complete the group.

Despite being written by Taylor Sheridan, a relatively under-experienced author and primary actor, the story is very original and riveting to follow, as the reality of the situations created help add to the entertainment value. Director David Mackenzie is also relatively inexperienced, this being his biggest picture. Hell or High Water is an example of how movies don’t require large named directors and screenwriters to create something original and entertaining.

Though it slipped by relatively unnoticed this year, Hell or High Water is up there with the best movies of the year and should not be underestimated.

La La Land was one of the most controversial films of the year. Many loved it, others criticized it for its overall white, privileged message. A middle ground on La La Land is an appropriate stance to take. Though it is definitely not the best movie of the year, it’s a well done production, even for those not fond of musicals.

The music throughout, the directing, and cast make it one of the best movies of the year. The music earned itself an Academy Award in best original score and was nominated for two best original songs (“Audition (The Fools who Dream)” and “City of Stars”). “City of Stars” was the eventual winner of the night.

Damien Chazelle, the director and writer of La La Land did a phenomenal job. Chazelle has some experience under his belt. He’s most well known for Whiplash, a movie he wrote and directed in 2014, also about music. He also is was involved in the screenplay of this years movie 10 Cloverfield Lane. Ryan Gosling and Emma Stone contribute touching performances to pad the success of the movie as well.

Hidden Figures is an important movie of the year because of it’s story. It uncovers a less-known story about the challenges African Americans faced in NASA and their valuable, but humbl

It’s an important story to be told, and a good choice to be recognized by the Academy with a best picture nomination, but it was definitely not in the running to win the Academy Award. It has a few too many clichés. It uses flashbacks that aren’t exclusively necessary to explain how gifted one of the characters was as a child, it has some unnecessary subplots that distract from the main one, it focuses on some of the main characters more than others and awkwardly tries to make up for it, and focuses more on historical significance and plotline than developing theme.

However, the historical significance is big and the story is important, so it’s easy to overlook a few flaws to appreciate the bottom line of the film. The acting also helps to make up for some flaws. Most notable in her performance is the actress who played the character most focused on in the film, Taraji P Henson. Octavia Spencer and Janelle Monáe also contributed to the impressive cast.

Arrival was a very different film than the rest of those nominated. On the surface, it was an alien movie focusing on language and communication, but th

e screenplay was very complex. It throws some twists at the audience, and leaves the audience contemplating the storyline after completing the movie, which is definitely a version of success.

Arrival is a movie that looks very good, its visual effects and cinematography are stunning. Its acting is good, but nothing special. Amy Adams has done much higher quality performances in the past. By her standards, this is certainly not a phenomenal performance. Jeremy Renner’s performance is nothing special either. Arrival doesn’t have a role that requires superb acting, so it’s simply decent acting is not a problem.

Director Denis Villeneuve has experience directing. His movies directed include Sicario in 2015. However, Arrival may be his most successful film.

Hacksaw Ridge is by far the worst of the Academy Award Best Picture nominees, which to be fair, is not saying that much. Directed by controversial figure Mel Gibson, this was his attempt to make a comeback after being basically blacklisted by the Hollywood community after anti-semitic comments in 2006.

Hacksaw Ridge is a World War II war movie based on a true story about a soldier, played by Andrew Garfield, who, based on religious views, refused to carry a gun into battle and served by rescuing soldiers and saving lives. The story Gibson began with is a good one. However, the film focuses less on character development and plot line and more on unnecessary war carnage, each scene more disturbing than the next one, with arguably no payoff.

Andrew Garfield demonstrates skillful and impressive acting in those few moments when we see him and his ideas and not war brutality. However, his best performance of the year, in Silence was overlooked by the Academy.

Hacksaw Ridge is an interesting film for those interested in effects and the evolution of war movies, but its lack of a storyline and overuse of explosions and barbarous carnage make it a far less enjoyable movie than what was possible with a storyline like this.