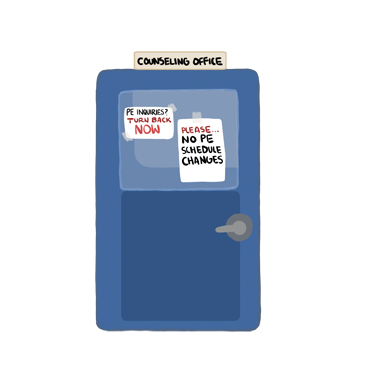 Physical Education (P.E.) is a two-year required course for every student that attends Tam. It has two components–one that encompasses the information a student would learn in a health class and a second, composed of the physical exercise itself.

Students regularly try to find ways out of P.E. in order to free up their schedules. Some elect to take a physical education course online, a selection that is now rarely allowed by the counseling department and forces students to pay for their course.

P.E. is redundant for student-athletes. According to the Center for Disease Control and Prevention (CDC), the recommended amount of physical activity a day is 60 minutes. If students play a sport, they are already fulfilling the CDC’s recommended time through a practice or game five days a week.

Over 800 students participate in Tam Athletics, not including club teams such as mountain biking or sailing. All of these students are currently required to take two years of P.E. for graduation.

Some argue that playing a sport deprives students of crucial information taught in the health section of P.E. There are several options to remedy this, one of which is incorporating the health curriculum taught in P.E. into Social Issues, a required class for freshmen. Another option is to add a unit to Integrated Science, a required course for all freshmen and sophomores, covering health and nutrition. The integration of health and nutrition curriculum into science or social studies classes would guarantee that each and every student, including those who are unable to participate in P.E. due to disability or have been accepted to take the course online, would still learn the crucial health information. In addition, it would allow students who play sports to take additional classes that will benefit them academically. Since P.E. does not count as an academic course and has no effect on a student’s academic GPA, students also would be more inclined to learn and absorb the information if this it was taught within a course that influenced their academic grade.

One counter argument is the possibility of students taking advantage of the system by claiming that they will participate in a sport in order to get out of P.E. but not following through. In order to prevent such an action, there should be a staff member, such as the Athletic Director, in charge of making sure students who are opting out of P.E. are involved in an applicable sport. The P.E. requirement would not be waived until that students sport season has finished.

While there are some potential problems that arise when assigning someone to enforce the requirement of a sport to opt out of P.E. Tam can follow the models of schools that have adopted this policy to work out any kinks that may occur.

If the school board were to approve this idea and waive P.E. for student-athletes, following the footsteps of several Southern California school districts and nearby private school Marin Catholic, students would have the option to take more classes. Tam needs to listen to its students and remove the requirement of P.E. for student-athletes. This arrangement would make the students, and consequently the entire Tam community, healthier and happier.