Athlete of the Issue: Zevan Solomon 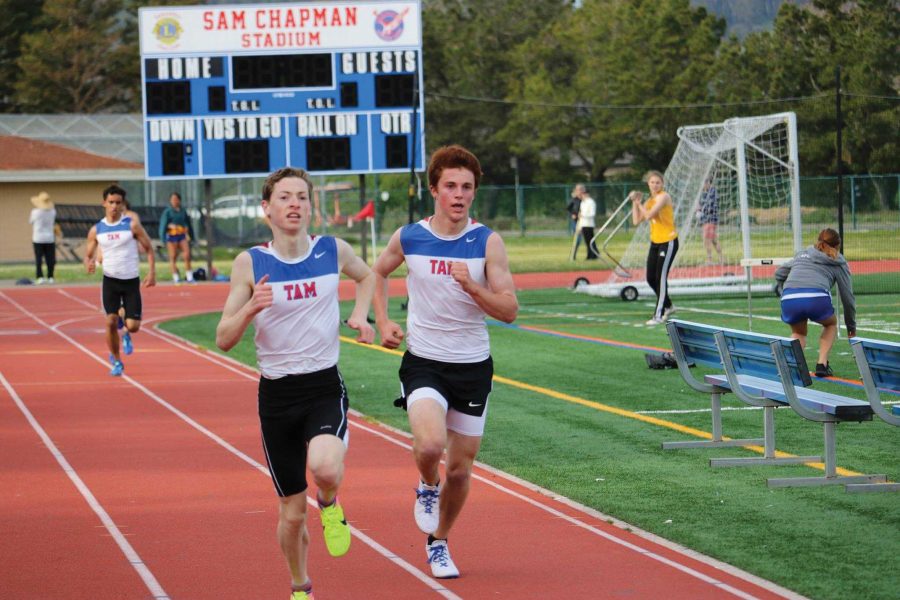 As his senior year comes to a close, Zevan Solomon stops to catch his breath and look back on his time on track and field and cross country.  Solomon runs the 800 meter, 1600 meter, and 3200 meter and helped the track team to a second consecutive MCAL victory this year.  His individual performance also qualified him for the North Coast Section (NCS) final meet, his last run of his high school career, where he placed twelfth in the 800 meter.

For Solomon, a love for running began to develop at age six .  It all started when he watched his father cross the finish line of a short triathlon in Santa Cruz.  Watching the runners finish the race inspired Solomon to run out into the course and finish the race alongside his father.

Solomon never looked back.  “Ever since I ran into the course, I had wanted to race just to cross a finish line, and my love for running has just developed through that [experience],” Solomon said.

He began running competitively in middle school, but ultimately found his place with his fellow runners.

“It’s the team dynamic that we have,” Solomon said.  “We all get along really well, and in training we compete against each other.  That friendly competition pushes all of us.”

Twice a week the teams meet for a training session, whether it’s 40 minutes to an hour of pace running or 20 minute sprints.  During their training, Solomon found that striking a conversation up with his teammates was a good way to pass the time. “On our moderate runs we talk a lot about sports…[We draw comparisons between the sports] about intensity and difficulty,” Solomon said.  “But really, we’ll talk about anything that can start a conversation.  You’d be surprised what the guys can come up with throughout [the run].”

Solomon’s dedication doesn’t go unnoticed.  “Zevan is a great guy, and a very supportive teammate,” senior teammate Jac Martin said.  “He always works incredibly hard to improve himself and do his best but never forgets to cheer on his own teammates to try their hardest.”

Solomon wasn’t always confident in his ability to run.  During the NCS showcase meet early in the track season, Solomon almost failed to cross the finish line and complete his goal.  “I was at about mile two of the course and I was having a really bad race to start, with people passing me left and right,” Solomon said.  “I thought about [stopping] for a minute, but then I thought about everything [the team] had trained for and all the work we’d put in.  I thought to myself, ‘Doesn’t matter how slow I finish the race, but I have to finish.’”

The unsung heroes key to Solomon’s development have been his coaches, who’ve challenged him to drive himself to be the best he can be.  “Learning from my coaches, [who have] pushed me to become a better person, they’ve helped me learn who I am and what I’m capable of,” Solomon said.

The bond Solomon has developed with his teammates is something that he will hold onto as he leaves Tam to attend the University of Wisconsin.

“The family we’ve grown into, our class that’s graduating this year, has gotten to know each other really well and we’re able to relate to the fact that we all run,” Solomon said. “[Having a] community of people that I could go to whenever I need help with something related to running or not has been something I’ll remember forever.”