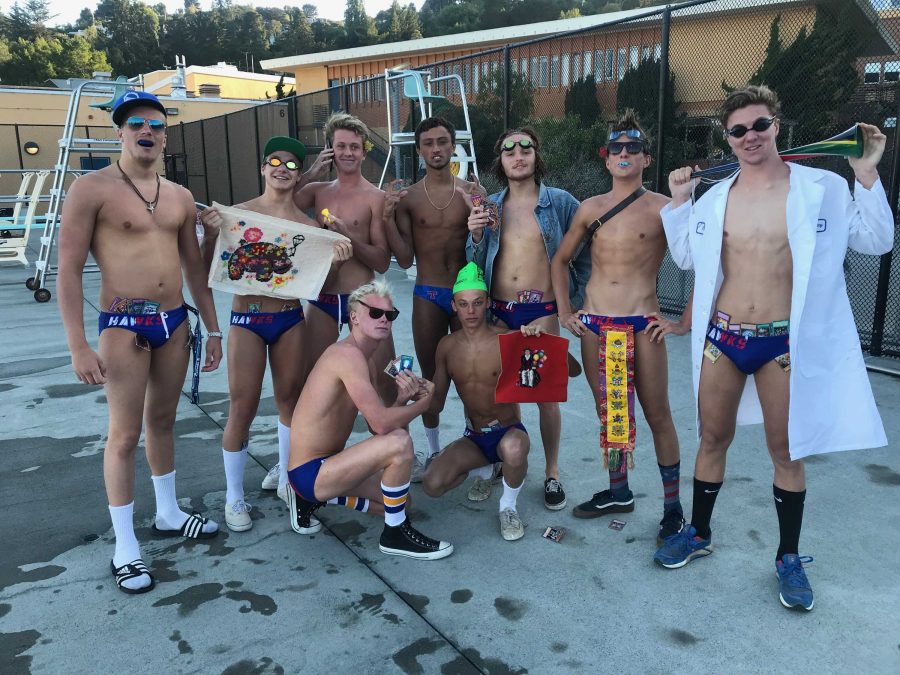 The team poses for a post practice photo, dripping in swag

As the final seconds ticked off the aquatic center scoreboard at Acalanes High School on November 17, Boys Varsity Water Polo head coach Bob Kustel breathed a sigh of relief. In his 16th season at the helm of Hawk water polo, Kustel would finally bring home an NCS championship banner.

“It was an unbelievable moment for the team.” Kustel said. “A huge weight off of our shoulders.”

With the 2017 campaign well underway, The Hawks face more challenges than a normal defending championship team would trying to avoid a championship hangover. Tam Water Polo makes it’s NCS Division I maiden voyage this season, a jump that will test the resilience and physical prowess of the 2017 Hawks. Instead of defending their Division II title, the squad will face some of the country’s premier talent in the gauntlet of NCS DI polo.

“I’ve loaded our schedule accordingly.” Kustel said. “We play in some pretty elite tournaments that will hopefully prlepare us for DI competition. This year’s team has played to our opponent’s level, which has been a blessing and a curse.”

Senior Captain Cian Concannon echoed his coach’s sentiment, expressing a need for urgency in the coming weeks for his squad.

“We have so much talent, and we’re right there.” Concannon said “We just need to gain the same momentum we had last year in the playoffs, if we do that, we’ll be tough to beat.

Currently, the Hawks stand at 8-8, with 5 of their 8 losses coming against talent Kustel called, the cream of the national crop. As the late October MCAL playoffs draw near, junior third year varsity player Connor King also hopes to see his team hit stride down the stretch.

“With the talent we have, there’s no reason we shouldn’t be able to play with the best competition.” King said. “If we put up a fight against these powerhouse programs we will really get the section wide respect we deserve.”

The MCAL playoffs begin on October 24, the Hawks will likely be the #2 or #3 seed heading into the tourney.