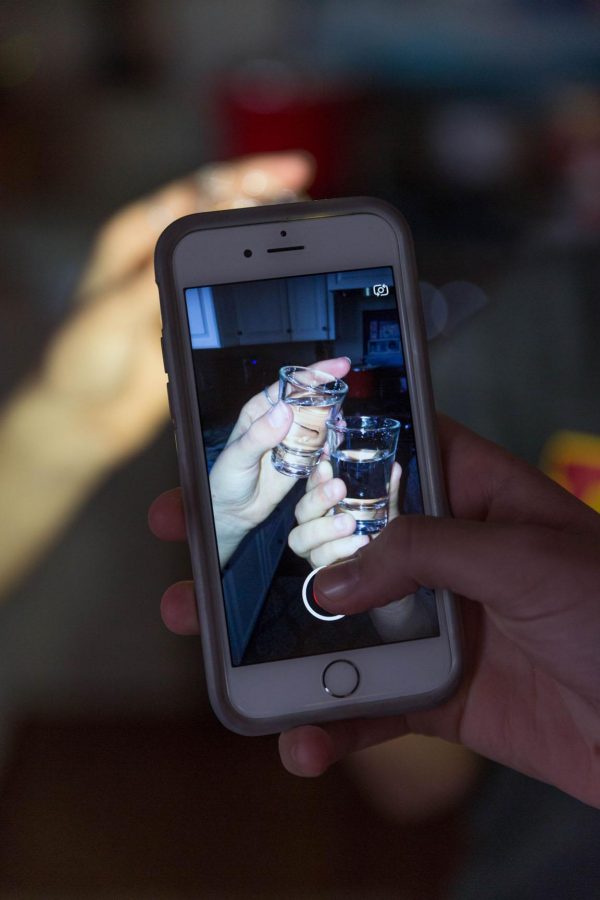 It’s 11 p.m. on a Saturday night. A Tam student is throwing up on the bathroom floor at a party, unaware that cameras are rolling. The student, who requested anonymity, described how it felt to wake up to that video on Snapchat. “There’s a video of me throwing up and people bring it up and just continue to show it. It’s just going to be out there forever. It [wouldn’t have been as traumatic] if there wasn’t video evidence of me throwing up and having everyone keep watching it over and over,” they said. This student is not alone in their experience.

“Partying is definitely brought up amongst the students I see every day …. I’ve spoken with students one on one who come to see me after a weekend and they are upset and scared because they know that they did something that they wish they didn’t do and someone captured it,” counselor Brian Napolitano said.

Scrolling through Snapchat on most weekend nights, it’s easy to get the impression that everyone is out partying and having the time of their lives. Poorly lit drunken selfies and videos of people dancing with their friends and shotgunning beers run rampant on Snapchat — as do videos of people throwing up, hooking up, or starting fights. Some nights, it might be you who is caught on camera during a regrettable hookup, one shot too deep. Or maybe you’re home with your dog watching Netflix, feeling slightly embarrassed for your peers as you check social media, either feeling a little left out, or thankful you aren’t there.

Social media has changed the high school experience dramatically. Still, according to Napolitano, some things never change. “Unfortunately, in high school, I think people like drama a little bit and they find it, and not because people are mean-spirited, or because they want to be jerks, just because it’s part of the culture,” he said. Tam may have always had this element to it, but the extent to which its presence has been exacerbated by the population’s widespread use of social media is a new and less-explored issue.

So: how is social media affecting student behavior at parties — drug and alcohol consumption, reckless or embarrassing behavior, potential long-term consequences? And for those on the other side of the screen, scrolling rather than posting, what are the psychological effects of the images they are seeing?

According to a 2015 Pew survey, 94 percent of teens with a mobile device go on social media platforms daily. A 2011 survey from the National Center on Addiction and Substance Abuse (CASAColumbia) found that teenagers who use social media daily are five times as likely to use tobacco, three times as likely to use alcohol, and twice as likely to use marijuana, perhaps because those teenagers are exposed to pictures of their peers under the influence. If increased rates of substance abuse are the result, students said, they were almost certainly not the intent. “People use Snapchat at parties to show that they’re cool and that they have stuff to do,” sophomore Isabelle Clifford said. “If you want to show off, you’re gonna post videos of the parties, your friends, and you.” But that momentary documentation can have lasting consequences.

Within parties, the presence of social media can impact students both emotionally and physically. One example, students said, is peer pressure, which with the advent of social media has become less obvious, if not less problematic. If a student is drinking out of a bottle of vodka and is being filmed, sophomore Emily Coleman said, “they will feel more pressure to go faster and drink more.” During or before a fight, social media can also escalate student behaviors. A student who requested anonymity and will be referred to as Riley explained how the presence of social media made him feel pressure to engage in a fight at a party. “It was a pointless argument, but we were both drunk. The minute someone took out a phone and [said] ‘fight,’ you realize that you’re a b-​-​-​- if you walk away,” he said. “[I’d have looked] un-masculine if I walked away from that so I felt inclined to be like ‘alright, I’ll beat the [crap] out of you’ because everyone’s watching, and everyone’s filming.” Boe Roberts, a Bay Area Community Resource (BACR) counselor and therapist at Tam, expressed that events like these are indicative of the general way the combination of phones and parties can affect students’ actions. “[There’s a lot of] attention seeking at parties, people feeling good about themselves in the moment when a lot of people are watching their stories. They feel cool, and they want to prove that to themselves,” she said.

While it is normal for teenagers to look to their peers to decide how to act, the addition of social media to students’ everyday lives has provided a constant knowledge of what peers are doing — inevitably increasing this aspect of peer pressure. Napolitano elaborated on how this can play into into how people are led to make decisions they may regret the next morning. “If people are drinking or doing drugs, more people will want to participate,” he said

It is evident that the constant presence of social media has changed the way we live our lives: on screen, off screen, with our family, and our friends at parties. But what often goes unnoticed is how it can impact students’ futures and their ability to succeed in school. It seems that what used to be a constant warning has recently become an insignificant detail: despite the fact that Snapchats can only last up to 24 hours, what’s put into cyberspace has the potential to stay there forever. But kids get sloppy; students admitted that they had saved photos or videos to Snapchat memories and then posted it to their private Instagram accounts. This dynamic occurs all the time, often without thought regarding how the material might affect others or themselves.

When it comes to academic consequences, parents’ reminders about the permanency of the internet may ring true. “When I go to see college admissions officers speak, they talk a lot about kids online and what effect it can have,” Napolitano said. A 2017 survey by Kaplan Test Prep found that 40 percent of the 365 college admissions officers surveyed said they checked social media during the admissions process. Of those that checked, 42 percent determined that examining a student’s social media presence typically had a negative impact on that student’s chances of admission.

“If someone was under the influence [and they were filmed] they could get in a lot of trouble,” Roberts said. “It’s just making public behaviors that wouldn’t have come to the surface before [the integration of social media]. I think people are really afraid of what the long-term effects are going to be. That never used to be the case. For example, what’s that [Snapchat] going to mean when you’re 25 or 35? And how accessible is that? People don’t know what their futures are going to hold or what careers they’re going into, [or whether] that’s going to matter.”

And the consequences of posting at parties can go beyond academics. According to both Napolitano and Roberts, the psychological effects are often more detrimental to students’ well-beings. The Tam News conducted a survey of 298 students in December of 2017 regarding the issues surrounding social media and parties. It found that 84.9 percent of students from all grades use Snapchat, 81.4 percent have seen pictures of parties on Snapchat, and of the students who have social media and have seen pictures of parties, over 50 percent have felt left out or excluded after seeing these images.

“When I see other people post videos of themselves being drunk at parties, I feel left out and it makes me want to post pictures of me at parties too,” junior Savannah Malan said.

Sophomore Devin Guinney felt similarly. “I definitely have [felt left out] from looking at pictures of parties on Snapchat,” he said. “I think that is probably why people post pictures of themselves at parties, to prove they do go to parties. [So do I], when I hang out with my friends, it’s kind of a way of saying, ‘hey, look at me!’”

An anonymous freshman added, “[Seeing these images] makes me feel excluded and like I am missing out on something fun …. It makes me feel unwanted.”

But if social media can make students wish they were at parties, it can also have the opposite effect. Some students said that the portrayals of parties on social media reaffirmed their opinion that they would rather not be included. “I’ve seen people very inebriated [on social media], on drugs or drinking, and I’d much rather feel like myself,” senior Jake Franco said.

For those who do experience a fear of missing out — commonly referred to as FOMO — after seeing these images and videos, the sheer speed and intensity that is inherent in social media might be to blame. “I’ve seen a lot of anxiety when you have information [from social media] coming at you that fast and it’s hard to shut off, it causes a lot of anxiety … and I think it promotes the party culture,” Napolitano said.

Roberts reinforced this sentiment, saying, “Snapchat is just a bigger platform [to promote yourself]. People in general want to feel cool and accepted and have a sense of belonging, and [feel like] they’re one with the community. That’s always existed, but social media has just taken that and exaggerated it.”

The addition of Snapchat’s presence to parties not only allows students to display social experiences that make them feel relevant, it also draws a line between who is at parties and who is not. “What often comes up for me as a therapist is a lot of people feeling like they are missing out,” Roberts said. “So when you’re posting things on social media, whoever’s not at the parties is aware that they’re not at the party in this way that didn’t exist before Snapchat stories. That has a huge impact on people.” Sophomore Talia Beyer reiterated this idea: “If people aren’t invited, it can definitely cause them to get jealous, especially when they see it on Snapchat.”

This issue can be explored by considering the different sources of FOMO in students. “When it comes to feeling left out, [I see] a lot of internalizing of feeling not good enough,” Roberts said. “I think [the origins of FOMO] are different for every person, it stems a lot from their families, who they are as an individual, and their community. But in general, the fear of missing out [comes from] the underlying fear that you might not be good enough, that you might not make it in the world.” Roberts emphasized how important it is for students to not blame themselves, pointing out that this is a widespread feeling brought upon by the increasing development of social media. “[This is evident] especially as a young person that hasn’t had enough time as an independent person to feel like they are good enough. It’s a big world out there and there are other opportunities to expand other parts of your personality. And so when you don’t feel good enough because you didn’t go to a party [your perspective] is more limited.”

Both Napolitano and Roberts echoed the sentiment that possibly the most crucial thing to remember is that it is natural to feel left out when constantly being exposed to what your peers are doing at all times. Maybe that means catching yourself as you take a Snapchat of a party and asking yourself why everyone needs to see this picture or video. Where will this Snapchat be tomorrow morning, next month, next year? Consider the repercussions for those on both sides of the camera and both sides of the screen.