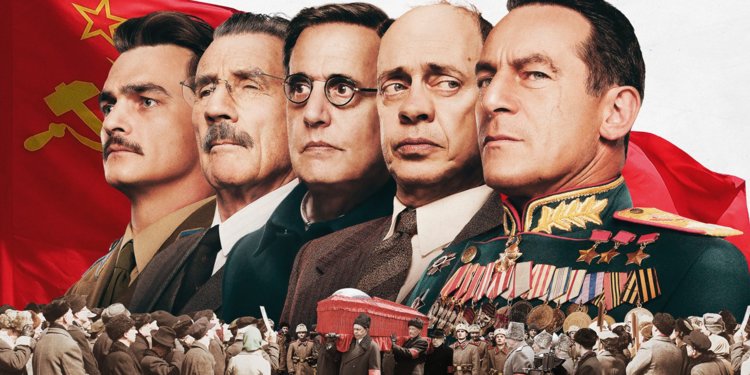 Any comedian will tell you that the best comedy comes from uncomfortable situations. In “The Death of Stalin,” director Armando Iannucci, best known for creating political satire “Veep,” takes that idea and runs with it. To be precise, he runs a marathon with it, stops to carbo load, then keeps going. If the audience can keep up, they’ll have a good time. But if they stop for a moment to catch their breath, “Stalin” will stop feeling uncomfortably funny and start feeling downright uncomfortable.

“The Death of Stalin” chronicles the transition of power within the Soviet Union that occurred immediately after Stalin died. Almost every major character is, on an objective level, a bad person. Most of them are murderers on a scale that spans an entire continent. Iannucci’s most daring move as director is not to imbue the situation with comedy but to humanize dictators, to the point where I found myself rooting for Nikita Khrushchev (Steve Buscemi) the same way I would for the purest and most well meaning of protagonists.

Political insiders have said that “Veep,” not “The West Wing” or “House of Cards,” is the most accurate representation of D.C. on television. What characterizes “Veep” is not idealism or even corruption, but ineptitude. Its comedy comes from watching powerful people reveal themselves as both morally empty and fundamentally incompetent. In “Stalin,” Iannucci applies the same formula to Soviet Russia but takes it to another extreme. The funniest moments of the film come from its cognitive dissonance: an unconscious Stalin (Adrian McLoughlin) lying in his own pee as his inner circle performs their admiration for him; Georgy Malenkov (Jeffrey Tambor), who was instrumental in the Great Purges, played as a bumbling yes-man; Khrushchev, in a hurry, putting his suit on over his pajamas.

Iannucci is essentially undressing autocrats and tyrants, so that, in their nakedness, they are revealed to be ordinary, almost pathetic. It’s the same technique employed by SNL in every Trump sketch, and by James Franco and Seth Rogen in the 2014 film “The Interview.” The difference is that Iannucci has more soul, a greater eye for detail, and a willingness to be unfunny that’s rare in comedians, resulting in fewer belly laughs and more reflection.

Although these kinds of depictions are easy to dismiss, they are powerful techniques for critiquing governments and leaders. For all its sophomoric humor, “The Interview” was threatening enough to North Korea that the country hacked Sony to keep it from being released. And you only need turn to Trump’s twitter to see that he’s not a fan of Baldwin’s interpretation of him.

But “Stalin’s” job is harder than SNL’s or “The Interview’s.” For one, it tries to acknowledge the inhumanity of Stalin’s regime, vacillating between the bumblings of the Soviet politburo and montages of midnight raids, shootings, and gulags. To not include this violence would be a lie by omission. Some of the most powerful moments in the film come when off the cuff or petty decisions by main characters result in the deaths of innocent people; Iannucci doesn’t let the audience forget that the casual, power hungry cruelty and ineptitude of Stalin’s inner circle has often disastrous implications for ordinary Russians. At the same time, it’s near impossible to tell both stories. In “Stalin’s” weaker moments, the contrast between comedy and horror just throws the audience off.

I left “Stalin” feeling uneasy, but that’s not necessarily a bad thing. Iannucci believes so deeply in comedy as a tool for political criticism that he trusts it to sometimes be serious. The product is light on easy laughter, yes, but it’s the best farce I’ve ever seen. ♦️