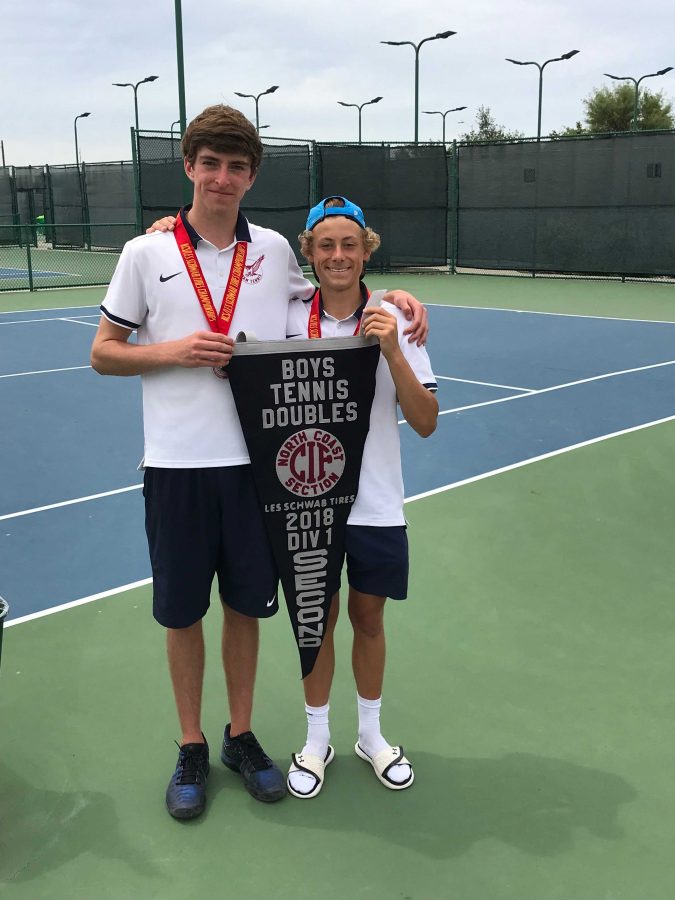 Sophomore Mason Marks and senior William Roddy claimed the MCAL doubles title, finishing 2nd in Division 1 NCS, and leading Tam tennis to the MCAL win. Marks and Roddy have been playing together for the last seven years and have developed remarkable chemistry.

“We’re able to focus during a match and feed off of each other’s strong desire to win and play well.” said Roddy. “I like playing with Will because he is amazing at the net as well as having strong serves. He also has strong determination and never gives up.” said Marks, in reference to their chemistry. Both Roddy and Marks also place a strong value on their team as a whole.

“The greatest team success was winning the MCAL championship,” said Marks “Our whole team had never cheered that loud all season and it meant a lot to the seniors since they never won before this year. This year we went out in every match with nothing to lose. We had a great group of guys that wanted to win everytime they stepped on the court.” Similarly, Roddy said,

“I will always remember that championship match and how elated our entire team felt. Everyone worked hard in practice and was motivated to beat Redwood.

As a Freshman, Marks was ranked fourth on the team, but this year climbed the ranks to first. Marks is not one to slack and works very hard to achieve the success he does. Marks said,

“I currently train 3 hours a day with other time doing workouts and conditioning, as well as competing in USTA tournaments on the weekend.” In the future Marks intends to play Division 1 tennis and he is currently training to compete in Sectionals, the biggest tournament in Northern California.

All good things must come to an end eventually. Roddy’s Tam Tennis career finished on a high note with lots of success on and off the court.

“I was proud to see our team perform well and win the pennant.” said Roddy. “Aside from the the victories on the court I will remember various social interactions and practices. We got along well as a team and had a lot of fun together.” Roddy plans to play tennis at the club level next year at UC Berkeley where he will be attending college. In regards to the future Roddy said,

“I’ll be playing tennis for decades to come, I love the sport and it will be a passion of mine for years to come.”♦