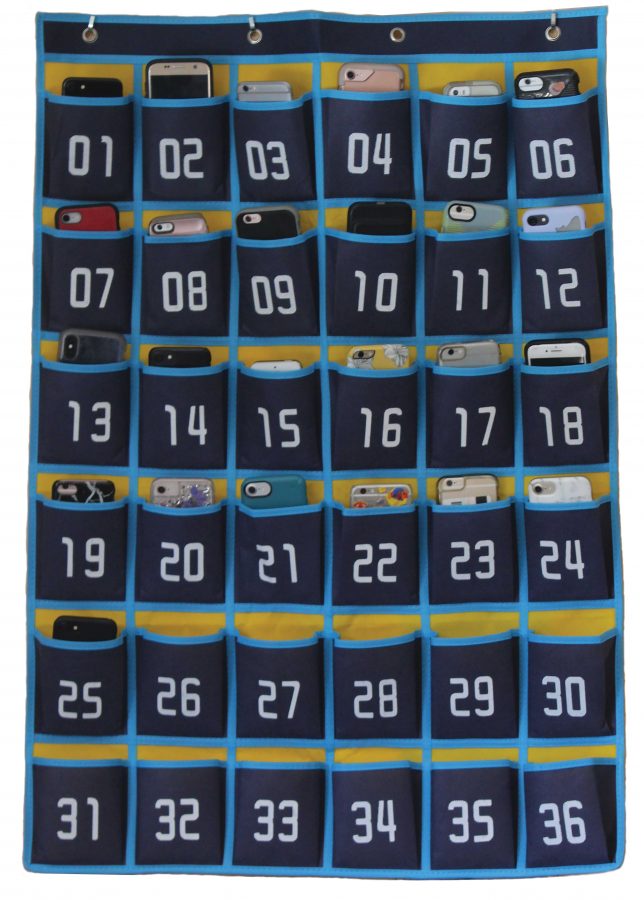 Administration has implemented a new cell phone policy for this school year which requires students to turn off their devices and place them in a classroom caddy for the duration of the period. According to the policy, teachers are permitted to allow cell phone usage if it is related to the coursework but otherwise should ensure all phones are in their designated slot at all times.

At the end of the last school year, the policy was voted into effect by teachers and administrators, and despite the fact that teachers are following it to varying degrees — some only mark a student as present if their phone is tucked in its proper slot, while others hardly notice when the caddy is empty — the sentiment behind the new rule is widely supported among staff.

“We took a survey of teachers to see if they would be in support of performing a cell phone policy,” principal J.C. Farr said. “Then we brought it to the school site council to have a conversation with parents and students. Between the conversations, it was unanimously supported by parents, students, and administration.”

Although cell phone usage has been an ongoing issue during class time in recent years, the administration has decided to implement a formal policy only recently. The process of discussing and finally coming to a solution was time-consuming in an attempt to be completely thorough, according to Farr.

“A lot of different issues came up,” Farr said. “We talked about cell phones, we talked about late starts, we just talked about ways and ideas for improving student performance. We wanted to just start fresh and give people a chance to adjust to a new policy.”

With the policy finally implemented, teachers are satisfied with the results. “I found a real improvement in the lack of distraction for students,” social studies teacher Luc Chamberlin said. “[Students] just didn’t have that as an option, everybody accepted it, and we moved on and I think everybody learned a lot more.”

While the staff is benefitting from the outcomes, not all students are fully on board with the new policy. “I feel like the cell phone policy should be abolished. What if it is an emergency, what if someone needs to answer for their mom?” senior class president JayJuan Radford said. “At the same time, [phone usage] is kind of an obsession for some people.”

Junior John Halloran agreed that without the constant temptation of phone usage, attentiveness during class time has improved. “I have seen people more focused in class — everyone is working on something,” he said. “I don’t think the policy is too extreme. It’s better than completely banning phones on campus. I think it is a decent compromise.”

An English teacher who asked to remain anonymous stated that while underclassmen may need the extra push in order to eliminate the distraction of phone usage, his senior classes have the maturity to make that decision on their own. He doesn’t implement the policy as strictly with his upperclassmen, based upon the belief that in this stage in their education they should be invested in their coursework.

Conversely, Farr holds the opinion that student freedoms must be regulated in certain cases. “I think there is a lot of trust that we have here on campus for students. There are a lot of different decisions that students are able to make … so I think there is a good balance between student autonomy and some structure for helping students make healthy decisions,” he said. “While students can show maturity and good decision making in different ways, we wanted to make a statement about protecting the integrity of instructional time.”

Administration plans to continue the policy for the remainder of the school year and, if it is successful, in the years to come as well.