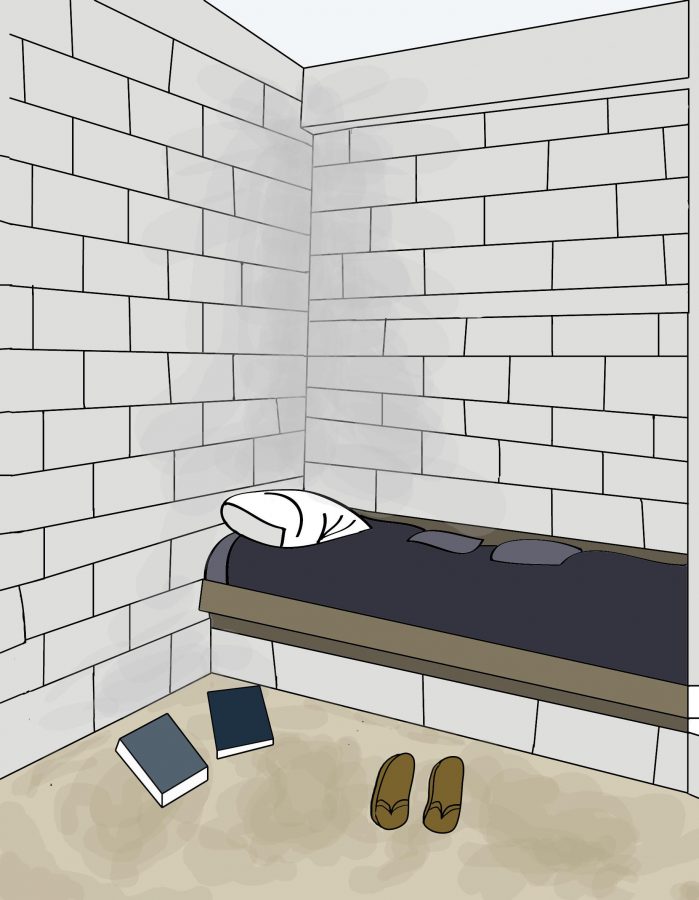 I’ve always started this story, in the few times I’ve told it, by saying, “I woke up…” That’s not exactly what happened. More accurately, I slipped out of a state of drunken blackout bliss and found myself in a grim corridor in Juvenile Hall.

Now I’ve always been stupid, but I act smart, and among the many that I have fooled I somewhere along the line must have also fooled myself.

I’m better than this, I told myself. What happened.

Mom’s not going to be happy, I thought ruefully as I became aware of my predicament. A man behind the glass counter was finishing what I assumed to be my paperwork.

“Sounds like you threw a haymaker at that officer,” said the man, signing me in once the police had left.

I tried to find a place for this information among my reputation for decent grades, video games, and bad shoes. Huh, I puzzled, well did I have good form?

I was led down a hallway where I exchanged my civilian clothes for an overlong shirt that touched my knees. I felt like some sex trophy, but more degraded.

A quick shower and another change into a loud prison orange shirt with navy sweatpants preceded my journey to my new home, a bathroom sized block of concrete walls with a solid steel door. The lights shined unceasingly through the night. I’d love to proclaim I stomached my new situation like a man and slept like a log but the truth is I cried. A lot. A little too much. It was a bit embarrassing. Fortunately the cells only kept one at a time. You count your blessings.

The transition from what I saw as my previous life to my new situation, one that in the moment I wasn’t how sure long would last, was jarring and tremendously uncomfortable. I really had no idea what to do, and barely an idea of what I’d done.

Morning came and I struggled with the realization that I hadn’t been dreaming. That was a tough blow. I’d really hedged my bets on waking up in my own bed, which, while silly, was the only real option I felt I had. So I burst into a new day with all the enthusiasm of a bitter, resigned, Well fuck.

After refusing breakfast for the first and last time, I proceeded to the in-house “school”. My fellow residents of the facility were already seated, and scattered thoughts about surviving prison suddenly jumped into my head.

“Remember to beat up the biggest guy on your first day so everyone knows you mean business,” I recalled the advice of my friend.

“Why don’t you sit here,” said a guard, placing me in front of the biggest guy. His hair was long and greasy black, he had a hard face sporting the beginnings of a sinister goatee.

School by itself was an experience. We were given floppy pencils, I assume to prevent unwanted shankery, while our teacher appeared to prepare her lesson before our very eyes. We copied a poem, copied down the time, copied from an encyclopedia. I would have slept more soundly in the classroom than I ever could have in my stiff and uncomfortable bed.

Getting into trouble has always been a real chore for me, but inside the facility you’d have thought I was Al Capone. Forgetting to make my bed, forgetting to walk with my hands behind my back, standing up too quickly, forgetting to ask to stand up, and my favorite, accidentally taking too many books for my cell. There’s no way around it, I was a failure of an inmate.

Predictably, if you are not an idiot, which I fear I am, you would have the common sense not to worry about things like shivving or prison riots in a juvenile hall. It was the basketball, in fact, that I came to fear the most. There was not a more humiliating display how out of place I was than my disastrous foray into basketball. Seeing the writing on the wall, I tagged out as quickly as I could before my team’s draining patience got the better of my health.

While I was out in the yard I was chatting with another of the friendly residents.

“You see that black chick over there?” he pointed.

“Oh, wow,” I managed, deeply uncomfortable. “No, no, no, that’s okay. Thank you though.” I always figured I might have to make some drastic changes to earn the attention of women. Juvenile Hall, however, did not seem like a step in the right direction.

I really couldn’t help sticking out like a sore thumb while I was there; I of course wanted nothing more than to blend in and be forgotten.

During lunch, one of the Latino kids turned from his seat and asked me what I was in for. I glumly recited my story, but added on at the end I probably would be out soon. He shook his head angrily.

“I only took a bottle and I’m in here for at least another week.” He said, staring at me.

“Oh,” I said weakly. “That sucks,” I offered. He turned around and muttered something about “white boy”. Christ, I was uncomfortable.

My eventual exit proved to be about as stereotypical as the rest of my experience. Seated in school with the predominantly minority and most likely poorer residents around me, the PA system blared my name followed by: “Your attorney is here to see you.”

Yikes, I thought, as I edged my way past chairs filled with bitter eyes.

The next day they let me out. Another inmate, a friendly and charming young man, inside for assault with a knife, and the closest I had for those five days to a friend, stood by the tiny window in his steel door and giggled as my shaking hands tied my shoes. “Free [nope],” he laughed. I gave a painfully awkward thumbs up and stumbled over my half tied shoes toward the impatient guard waiting to send me out.