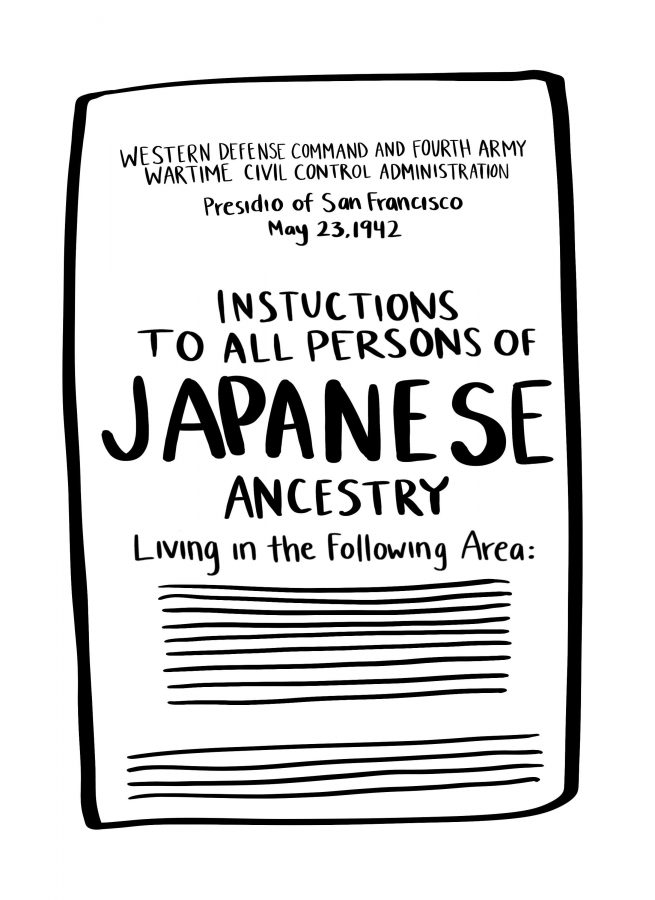 My grandma stands at four feet eleven inches and sports a short, close-cropped salt and pepper haircut. Her skin is darker than most other Japanese Americans, a reminder of her upbringing on a small farm in Pescadero. She likes to knit her grandchildren sweaters, send them off to college with homemade quilts, and make oatmeal raisin cookies for her neighbors. In addition to these simple and admirable facts about my grandma, she was also once a five-year old prisoner in the American Japanese Internment camps.

The Japanese Incarceration camps, or more commonly known as the Japanese Internment Camps, are a dark stain on America’s history as a whole. The reason they were put in place is racist and unjust. Yet it seems to me that no one cares about this atrocity, or even acknowledges how similar it is to some events in today’s news.

My grandma’s maiden name is Mutsumi Janet Muneno. She was born on a farm in Pescadero, CA,  in 1936, just five short years before Pearl Harbor was bombed. “From zero to five, I had a pretty idyllic existence on a small farm, a small Japanese vegetable farm where my parents grew a lot of sugar peas and other vegetables.” She said.

On the morning of December 7, 1941, all hell broke loose. “My first memory of Pearl Harbor was the neighbor boy running across the fields saying, ‘Uncle Saiki, Uncle Saiki, the Japs have bombed Pearl Harbor’ and he was very very anxious, and you know, scared. So what I knew is that wasn’t a good thing, I didn’t know what Pearl Harbor or bombing meant,” she told me.

In February 1942, Franklin D. Roosevelt issued executive order 9066 which had the power of removing all Japanese Citizens from the their homes in the Pacific Military zone. “The executive order, what was it, 9066? It came into being and after Pearl Harbor, and within a couple months we were evacuated, which meant that life as we knew it was completely over. Crops were left, the farm equipment was left, and people probably could just come in and take it,” my grandma said. Many Japanese Americans were forced to leave behind their homes, their farms, and everything that they could not carry with them to their new camps. “They put everything into suitcases, they didn’t know where they were going for the long run.”

Executive Order 9066 was supposedly put in place in order to prevent espionage. In order to stop Japanese spies from exposing American secrets, they were all relocated. To this day, not one case of espionage has been found.

“The memories I have of the evacuation, or that time when we were still in Pescadero was being very frightened because there was a knocking at the door and there were two soldiers with guns. They were there to search the house for, I don’t know what, contraband? We weren’t supposed to have cameras, or anything that would show we were loyal to the Japanese Emperor, which was sort of crazy since [we] were Americans.”

When they left their homes, Japanese Americans on the west coast went to regional assembly centers. “The assembly center [for our region] was at Tanforan, which was a racetrack. There is now a shopping mall there. So this was a racetrack and there were some very hastily put up barracks and lots of the people were put into the horse stalls.” Her family lived in a barrack in Tanforan and slept on army cots with hay mattresses and no sheets. Soon after, they were moved from Tanforan to Topaz, Utah, where they would spend most of their internment. “We went to Topaz, and we were assigned to barracks. [Our family of 5] were in a room about the size of this.” She gestured to her living room, a small space about 10 by 20 feet.

The conditions in the camp were those similar to an understaffed, low-budget prison. They ate in central mess halls, went to central bathrooms which were separate from their barracks. Barbed wire fences surrounded the boundaries of the camp and watchtowers were stationed with armed soldiers at all times. “There were guard towers guarding us, should we escape to the desert.” As she says the last sentence, she laughs. “So It’s very troubling to me that they’re actually building buildings for the undocumented [immigrants].”

The current situation concerning undocumented immigrants and their families at the border currently shows similarities to the internment camps. In both cases, America isolated hard-working people living in America for mostly racist reasons.

After the war ended in the Japanese were gradually freed from the camps. Some returned to their hometowns, others tried to make a life for themselves around the area they were interned. None of them received an official apology from the U.S. government until 1988.

After the war, the U.S. government would not acknowledge their wrongdoing and still claimed it was a military necessity. It was not until 1988 that the government publicly apologized for the injustices of the camps.

The current administration seems to not have learned anything from this event. The Muslim travel ban, and Trump’s talk of a Muslim registry during his 2016 campaign are prime examples of how we still have mindsets fueled by racism and fear.

There are many details which I did not include in this narrative of my grandma. I didn’t mention the way that she dug her fingernails into her legs to stop from screaming when the soldiers raided her house, I didn’t mention the dog she had to give away, and my great- grandfather, whose son my grandma married, that committed suicide in the camps after his spirit was crushed and his life taken away from him by Executive Order 9066.

When I first heard about the Internment Camps, it shifted my view of the American government entirely. I tried to find ways I could justify my country in this decision, the one that I was taught to be loyal to, but in the end my conclusion was the same as my grandma’s —this was racial prejudice. It pales in comparison to other atrocities the United States has committed, and is understandably overshadowed by the Holocaust in Germany, a much more grim and disturbing event during the same time. However, I do stand by my disgust in America. We were hastily locked into prisons for nothing but the slant of our eyes and the country we had left. It was for the war, but only a few German and Italian nationals were detained. While Japan did awful things during World War II, I firmly believe America did some too.

When I was in fifth grade and was formally introduced to the concept of racism against people who looked like me, it made my blood boil and my stomach hurt. Even in elementary school, I remember kids telling me that they weren’t that bad, and that it was just for America’s safety. What threat to America did any of us ever pose except being Japanese? Why was the propaganda printed out against us insulting, demeaning, and ugly? Why hasn’t anyone seen that the same thing is happening today?

I want to express how the lack of general understanding on the subject also leaves us ignorant to how such prejudice affects America similarly now. We can see that the Muslim ban is wrong, and we can see how devastating it is to separate immigrant families at the border. So why do we keep letting America get away with it? And why do we have a constitution if it just gets violated time and time again? These are the questions which we stay oblivious to in our constant partisan divides. If we cannot see how our history keeps repeating itself in the worst ways possible, change will never occur. Now is the time to shape up and realize what’s happening in our country today before we see another internment camp.