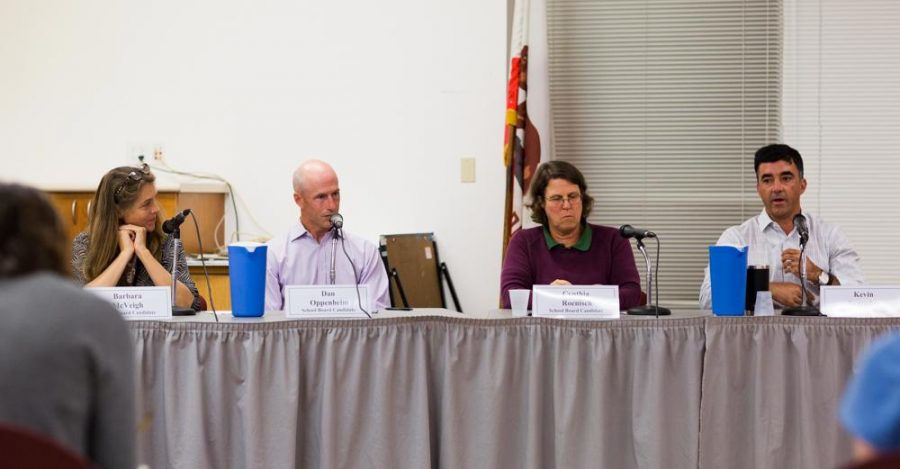 Recent financial complications within the district, which arose from a rising student population with no additional funding to satisfy the influx, as well as the abrupt resignation of former superintendent David Yoshihara this summer, have left the board with difficult decisions to make. To counter the problem, the Board of Trustees voted to put a local parcel tax on the ballot for Election Day on November 6, in an initiative called “Measure J.” Parcel taxes are used in California to fund public schools and community districts. The proposed parcel tax would impose $149 per each parcel of property for the next four years. If passed, district schools collectively would obtain $5.1 million per year, which would be put towards maintaining academic and nonacademic programs alike, according to the TUHSD website.

All of the candidates have stated they are prepared to implement immediate change and financial reevaluation in the district. Oppenheim, Roenisch, and Saavedra have established shared goals and are campaigning as a slate. They hope to serve the district together and collaborate to enact their common values.

According to the TUHSD Governance Handbook, “School boards are the democratic representation and are charged with the legal responsibility to ensure all children in their community have the opportunity to achieve an equitable and excellent education.” The TUHSD Board of Trustees holds monthly meetings to implement goals surrounding the advancement of the district and to uphold the quality of the student experience, including the district’s financial stage.

Roenisch, a former attorney and current teacher at Alameda High School, has been on the Kentfield district board for 13 years. As her term on the Kentfield board ends, she said that her experience and knowledge would be of aid to the TUHSD board.

“The first thing that obviously has to happen is the parcel tax needs to pass,” she said. “If that doesn’t pass in November, then plans need to be made to put it back on the ballot within six months.” Roenisch said she successfully helped pass a parcel tax in Kentfield and she, Oppenheim, and Saavedra are determined to implement Measure J in the TUHSD. The parcel tax would not fix everything, according to Roenisch, and three million dollars in cuts need to be made in the district this year regardless of whether it passes. “The board would have to make decisions on where the savings would have to come from … I have willingness to do it and I’m not afraid to deliver bad news,” Roenisch said.

In terms of the board itself, Roenisch would make setting ground rules for members a priority: “Putting some expectations in place and parameters in place about what’s proper for a board to do, [and] what the superintendent’s role is, so we’re working at optimal efficiency.”

Saavedra, an investment banker and treasurer of the Measure J campaign, attributed the recent financial troubles to a lack of understanding on the board’s part. “District financial operations are not something that most people understand until they engage and come to learn about them,” he said. “The people in place at that time did not really understand the trajectory that we are on … There are ways to institute protocols so that these kinds of challenges can be addressed years before they have to be solved.

The district is currently dipping into reserves saved for times of financial need, with more significant cuts on the horizon. Oppenheim, a housing economist, reinforced that planning from this point forward is essential. “There’s a lot of the talk in terms of saying there’s need for budget cuts because of enrollment growth. That’s not correct. The enrollment growth was very predictable and we could have seen it through the feeder schools in the past years,” he said. “The need for the budget cuts is because there unfortunately wasn’t planning for some of the issues that are coming through … I would have preferred that the board would have taken action a couple years earlier and in a more significant form.”

She hopes to divert the focus of the budget to implementing environmental-friendly transportation and agricultural reform. Specifically, she wants to propose defunding schools’ football teams. “How are we spending our money? Where is it going? Really questioning the sports right now, and I know that that’s going to be hard for some people because we have been so sports-driven,” McVeigh said. “It doesn’t mean that that has to go away completely, it just means shifting it to the city or county.”

McVeigh firmly opposes eliminating programs by way of budget cuts altogether. “I would never want to cut programs or cut teachers. I don’t think I could go to bed at night knowing that I was a part of that,” she said. “We are a wealthy community, there are ways to get around that.”

Saavedra described McVeigh’s focuses as at odds with the financial matters at hand and “entirely inappropriate for the situation.”

“She’s not raising money for Measure J, she’s not volunteering for Measure J … The district has issues that need people to engage to help solve and she’s not engaging in anything productive,” Saavedra said.

All of the candidates agreed on fostering a collaborative dynamic between board members, as well as with the public. “I didn’t get a sense that [the board or the superintendent] felt accountable to the community for decisions that were being made,” Roenisch said. “In good times and bad times, the board has to take accountability.” Roenisch also plans to prioritize transparency and board member accessibility within the district.

Saavedra concurred. “We’ve got challenges. We know how to address them. But I definitely think the people on the board and the superintendent need to be more visible in the community,” he said. “When you have to come back to people and you have to say we’re gonna do a cut, you don’t want them saying, ‘Why?’ You want to make sure the community’s receptive to the things that we’re doing.”

Maintaining successful district activities and programs is a priority for all candidates, as is not allowing budget deficits to get in the way of program success. “In my opinion, the district does a very good job of operating,” Saavedra said. “The district right now is confronting a fiscal issue because of good things. Mass increase enrollment … it’s our job to help the school system provide an experience for these kids that is [as] good at a higher enrollment as it was for a lower enrollment.”

Roenisch is content with the quality of education the district provides as well.  “I would just like to maintain the excellence that we have and that means continuing to retain highly qualified teachers, hopefully maintaining class sizes, and then hopefully being able to maintain diversity of programs,” she said.

“The main [goal] is to allow programs to continue and to make sure there’s the funding to enable that,” Oppenheim said. “We’ve got some of the top schools in the state and country here, and people live in the area because of that. The goal of the board should then be to help the superintendent, the administration, the teachers, and students, really to have this top-notch education,” Oppenheim said. He aims to “stabilize the district from the funding perspective,” recognizing that future plans are variable based on the outcome of Measure J.

Despite her criticisms of the district’s traditional approach educationally, McVeigh remained optimistic. “With our resources, being smart, having some incredibly young bright kids, I believe we could be the model for social change in this entire country,” she said.

All photos by Ethan Swope.