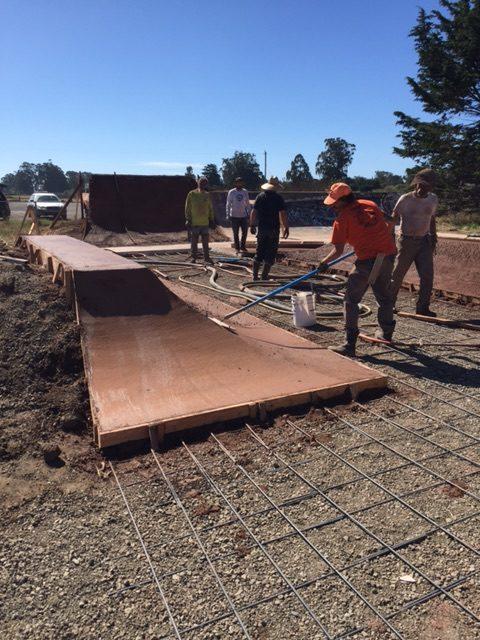 Work Being Done on the Bolinas Skatepark

Renovations to the Mesa Skatepark in Bolinas were completed after a two-week construction period that started on September 4 and ended on September 15. The improvements to the park are geared towards skateboarders with less experience, as well as those wanting to improve their skills, and include additions to previous ramps and a doubling of the size of the park to include new areas.

“The renovation provides features that are accessible to younger skaters,” Mesa Park property manager Michael Cavette said. “It also ties together the existing features so that more of the park can now be skated on in a single run.”

Park co-designer Clay Shank shares these views. “The existing park here was a lot of fun, super functional, and served its purpose for a long time. But some of the people in town felt like it would be better to offer a more versatile array of obstacles to give beginners an opportunity to learn,” Shank said. “We’re trying to get beginners and less experienced people to come and ride and learn how to skate and give experienced skaters a chance to improve and ride different things and be a mentor to younger people as well.”

While the upgraded park features were only added recently, the plans to include them were originally intended for the property. “This renovation is part of completing the original plan for the skate park. The new areas were included in the original plan and were intended to be built when additional funding was secured,” Cavette said.

Fundraiser and park designer Tyrone Blair cited how adamant the community has been pushing for renovation. Blair said. “It has always been a dream of mine and the local skate community’s to finish the park.”

While plans to revise the park have been underway for years, the fundraising did not begin until recently. “Last year we did a concert in Bolinas to raise money, recently we had a little event over at Proof Lab,” junior Garnett Silver-Hall, a Bolinas resident and frequent park-goer, said. “We [also] did a GoFundMe.”

Proof Lab, a local skate and surf shop in Mill Valley, was a large benefactor in the park’s improvement. “Helping drum up local support, we donated directly, had a fundraiser at the shop, and supported a few fundraisers in Bolinas,” Proof Lab employee Will Hutchinson said.

The new enhancements to the park are also expected to attract skaters from around the Marin community and have a positive impact on Bolinas. “The skatepark is now more used by more new people than I’ve seen in 10 years. I see moms and dads in lawn chairs cheering the kids. I see younger kids skating alongside the older skaters. It’s a fantastic meeting place,” Cavette said. “I’d like everyone to know that this park would not have happened without the hard work of many dedicated people.”