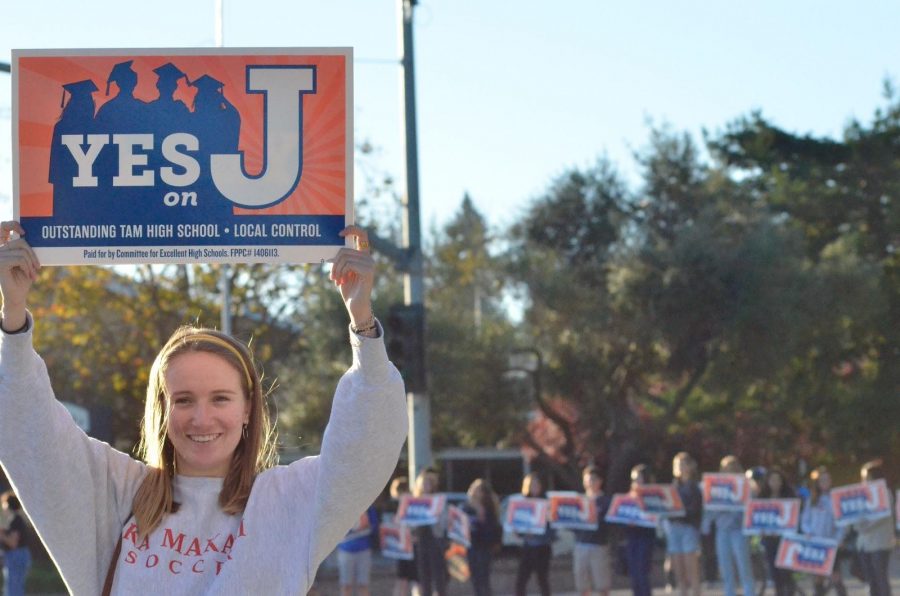 By Milo Levine and Skye Schoenhoeft

Measure J passed with 74 percent of the vote on Election Day, November 6. According to the official Marin County website, this measure “protects high quality education with local funding that cannot be taken by the state” by implementing a levy of an additional $149 per parcel for four years, on top of the existing $293 per parcel that will expire in 2020. The projected $5.1 million earned from the levy will be used to reduce the budget cuts that will be necessary to save the district from its current financial crisis.

Tam students advocated for the passing of this measure, and on Monday, November 5, and Tuesday, November 6, held rallies in front of the arches before school.

“[Measure J] preserves activities that make this school enjoyable, like drama and arts and also helps our teachers so we wouldn’t have to make any more drastic cuts than we already have to,” senior and student body president Natalie Bricker said.

“Even though most [of Measure J] won’t directly affect me, as a Tam High student it should always be my job to advocate for my school for everyone,” junior and leadership student Theo Koffman wrote.

The specific budget cuts that will be made are currently unknown. “There will be an opportunity for community input again in the early part of 2019 before the Board makes a final decision sometime in February,” TUHSD board president Leslie Lundgren-Harlander wrote in an email. The Fiscal Advisory Committee, tasked with addressing the budget crisis, is in the process of giving an official recommendation to TUHSD superintendent Tara Taupier, who will then make her own proposition to the board of trustees.

[Measure J was a major focus of the candidates for three unoccupied spots on the TUHSD board of trustees this Election Day.]

At their November 13 meeting, the board unanimously approved further exploration of a program aimed at incentivizing early retirement for district employees, in order to cut costs. The program will not officially be enacted until a vote scheduled for the February board meeting takes place.

Above: Junior Amelia Muir was one of many students who advocated in front of Tam High for the passing of Measure J. Photo by Josie Spiegelman.