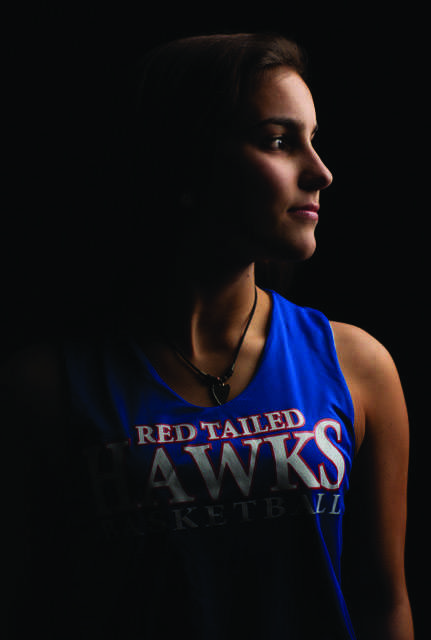 According to official National College Athletic Association (NCAA) rules, Division 1 coaches can begin contacting girls basketball athletes to start the recruitment process on September 1 of their junior year. This year, a few weeks after that critical date, Olivia Ali, a junior and varsity basketball player, tore her right anterior cruciate ligament (ACL) during this year’s Football Fest in September.
“I was really upset, not because it hurt, but because I knew that my season might be over,” Ali said. “That was really hard on me because over the summer I trained really hard. I really wanted to play and I really wanted to start. It was a big deal.”
Since undergoing surgery to reconstruct her ACL, Ali has had to wear a knee brace and has been unable to participate in any physical activity. She is not expected to recover and return to basketball until June. As a result, she’s worried about how her future might be affected.
“Just the thought that they’re all getting better in the nine to 12 months I’m gonna be out, and I’m getting worse. It’s not a good thought. A lot of girls on my team [Amateur Athletic Union] have already been talking to colleges and coaches … it’s hard to see that and think that ‘man, I could be there,’” said Ali.
Despite her concerns, she’s still determined to contribute to the team and return as strong as possible. Ali does physical therapy exercises twice a day, attends an ACL therapy class, and has meetings with her physical therapist once a week.
“I go to every single game and every practice,” Ali said. “I help out some of the new girls on the team who don’t have a lot of experience. I try to be sort of a leader off the court helping them out with plays if they don’t understand it. I try to do my best.”
Emma Bowser, a sophomore teammate, believes that Ali’s efforts have paid off.
“She has a personal relationship with everyone on the team because she cares about all of us as people and players. And it is so refreshing to have a leader on the team that isn’t ‘me, me, me’ and is all about the team. We want this team to go all the way for her and it says a lot that the whole team wants to win for Olivia,” Bowser said.
Ali has been playing basketball since fourth grade at the Catholic Youth Organization of Our Lady of Mount Carmel Church and made varsity her freshman year. She largely believes her father sparked her interest in basketball.
“[My father and I would] always watch Warriors games together and I always loved it,” Ali said. “Me and my dad have always had basketball. We’ve always trained together and it’s like our thing. ”
Her father’s experience as an avid basketball athlete made him especially concerned with her injury.
“…When I got hurt it was almost like a part of him was almost taken away. At first, my dad was really mad [when he learned about my injury]. He was really upset, but I think he was more sad than mad and just didn’t know how to express it. When he was in high school he tore his meniscus and he was out for his whole junior year. And because of that he’s always told me not to hurt myself and try to be careful,” Ali said.
Regardless of all the hardships she faces, Bowser is confident that Ali is strong enough to push past them.
“I understand her concern about physically not being able to play,” said Bowser. “But she still has another year, and knowing Olivia she’ll be back sooner than expected and better than she has ever been because that is who she is—a hard worker.”