Keep Your Blindfolds On

Bird Box was not must-see TV 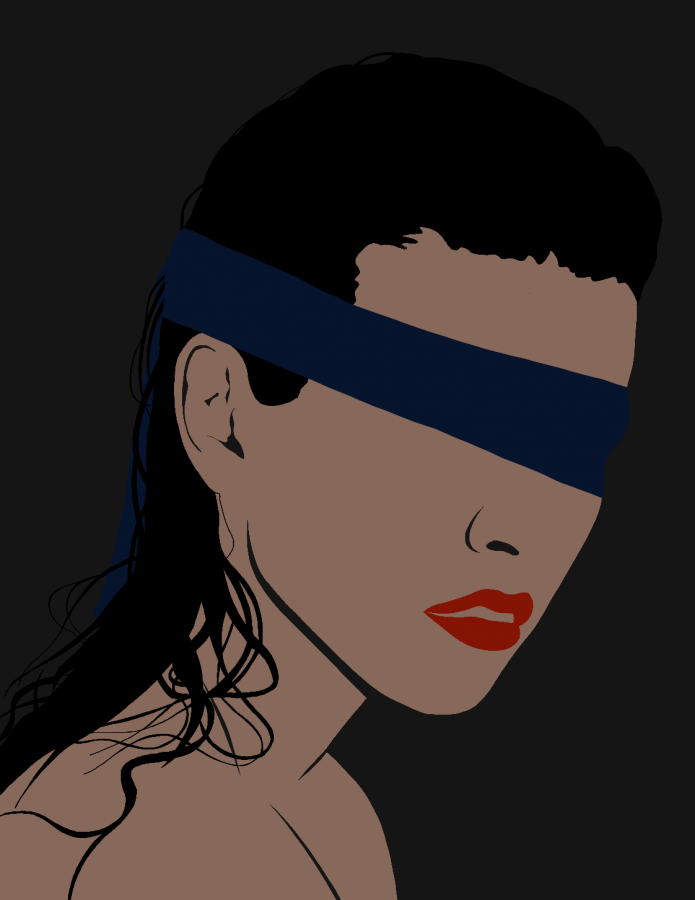 When Bird Box came out on December 21st, it seemed as if the whole world had been set on fire. There were immediately jokes and pictures circling around the internet, prompting more and more people to watch the movie and discover what the excitement was about. With 45 million accounts having streamed the movie within the first seven days, Bird Box is now the most successful Netflix produced movie to date. While its popularity may be indisputable, the film still leaves much to be answered while gliding the movie on with a half-baked plot.

The movie is split in between  two timelines throughout the movie-one set in modern day, and one set five years in the future. During the modern day timeline, we are introduced to the protagonist Malorie (Sandra Bullock) as a cynical soon-to-be mother with a bit of an attitude problem and her sister, Jessica (Sarah Paulson) the free-spirited optimist who never misses a beat. The alternate timeline set 5 years after this shows Malorie and two children in blindfolds, paddling down a river in a dinghy boat to find what they hope will be safety. A cinematic tactic to keep audiences inferring as to how they got there, the split timeline is one of the few aspects of the movie which seems to work in engaging the viewers’ intellect.

Both main characters when introduced are left underdeveloped with a somewhat sloppy backstory, before attention is shifted to a TV as it mentions mass suicides happening halfway across the globe. However, the pair doesn’t seem to be too concerned about this, as they brush it off, continue on and get an ultrasound. After we learn that Malorie isn’t too jazzed about having her baby, the town is ravaged by a storm of suicide-inducing “entities” who force a group of ragtag survivors into a house headed by a cranky cynic. Thus, the stage of our trial of perseverance and the human spirit is set.

The premise of if “you look, you die” makes the film somewhat intriguing as we watch the characters navigate life without sight. Though the initial plot of the movie seems attractive and garners a click, Bird Box still has a treasure trove of unmined potential which shows that sometimes even Sandra Bullock can’t save a film.

My main complaints about the movie’s shortcomings concern the group of “believers” who emerge, or people who can see the “entity’ without killing themselves. There is never an explanation as to what makes them different from others, and instead they serve as a way to put pressure on Malorie and kill off some of the more interesting characters. In fact, we never even get a glimpse of the creature on film. The most we are allowed is a gust of wind rattling the forest that urges the children to remove their blindfolds. According to an interview done with Mashable, director Susanne Bier and actress Sandra Bullock explain how while they initially filmed a scene that included the monster, it seemed to ridiculous to put on film. “It was a green man with a horrific baby face.” Said Bullock.

“It so easily becomes funny. We actually shot that and spent a lot of energy on [it], but every time I saw it, I was like this is not going to be tense. It’s just going to be funny.” Added Bier. While there was once a defense for not seeing the monster due to a cinematic choice that everyone’s worst fear is different, the fact a scene was shot and simply too ridiculous to be put on screen leaves me disappointed that there was just a lack of ability to stick to theme and still deliver on a critical part of the film.

Although Bird Box was riddled with flaws and shortcomings, at times it delivered as a suspenseful and intense horror movie. Though some scenes lived up to the the movie’s newfound reputation, but overall it just left me unsatisfied as I watched underdeveloped characters navigate their way through a half-baked plot. Perhaps a movie that treated a complicated subject such as suicide with a questionable amount of respect was simply another way for Netflix to add another Stranger Things level success to its belt, but either way, if one hasn’t already joined the millions who have seen Bird Box, I would suggest they continue doing so.