Vaulting Over the Competition 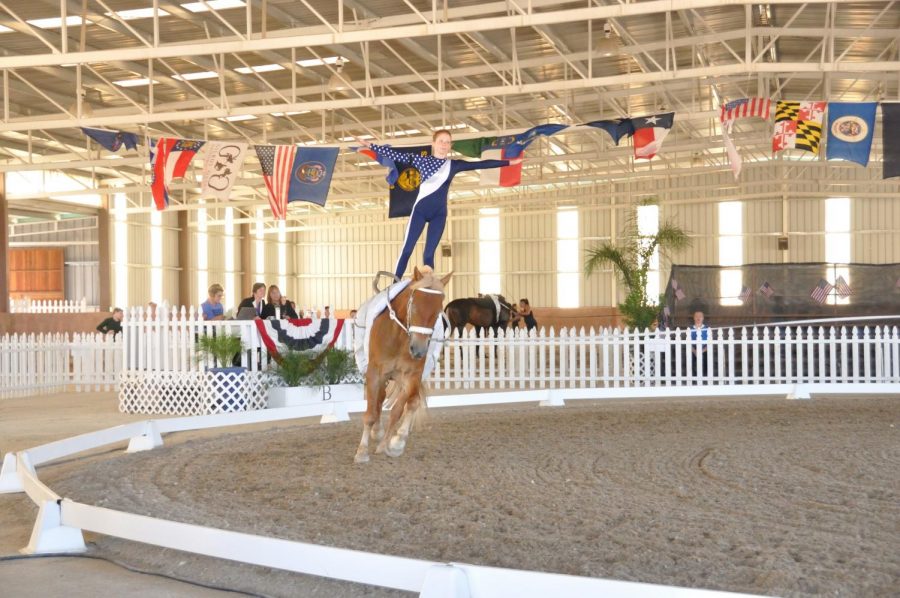 It is not often that you meet an athlete at Tam whose sport is relatively unheard of. At school, we celebrate success in activities like basketball, soccer, or mountain biking. Yet, for athletes like sophomore Isabel Jasper, sports go beyond the status quo. As a dedicated vaulter, Jasper can be found perfecting her handstands — on moving horses.

“When I say I do equestrian vaulting, most people are like ‘What?’ Here [in the United States] it is not very well known,” Jasper said.

Equestrian vaulting, also referred to as vaulting, is the art of gymnastics and dance on horseback. The sport can be traced back thousands of years, but modern vaulting was born in post-war Germany. Jasper’s German roots are one of her ties to the sport.

“I’ve been vaulting for about four and a half years. I got involved because I did gymnastics for about six years before that, and … my mom used to vault in Germany,” Jasper said. Jasper is a bronze level vaulter and scored second place in her team division in the USEF/AVA National Vaulting Championships last summer. As the only vaulter from her team that attends Tam, Jasper expressed her reassurance from the sport’s lack of exposure.

“I think it’s kind of exciting to be able to do something that not so many people do.[You know all of the people on] other teams you compete against and you see them again every competition. It’s nice to have a smaller environment. Even at the national competition, we knew all of the people who were there,” Jasper said.

Jasper has named many lessons from her unique past time, which she has applied to other aspects of her life. “I really like the team spirit and it’s very exciting. You’re constantly getting out of your comfort zone. I’m personally uncomfortable with some things that come with vaulting like … flying; for the last two years, I’ve been flying. Yeah, that was scary. It’s just an exciting sport where you learn new things all the time,” Jasper said.

By reining in her skills, Jasper has recognized and appreciated what she has learned from the sport. “I like all of it. I think one of my favorite things is the connection between you and the horse, and you and the team. That’s the biggest thing. The relationships you build.”