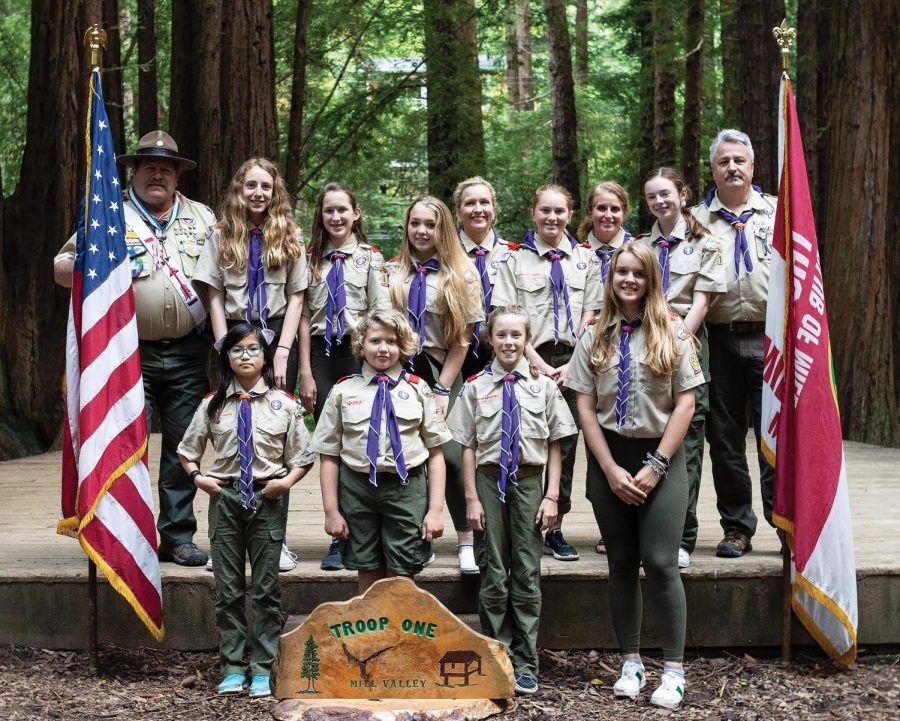 Tam sophomores Abby Alpert and Cassie Peterson are doing something no girls in Mill Valley have done before. In February, Boy Scouts of America (BSA), now called Scouts BSA, first started accepting girls into troops across the country. When they heard about it, both girls wanted to join, and in March they became founders of the first Mill Valley Scouts BSA girls’ troop.

“In Boy Scouts we get to use knives, and do archery and shoot rifles,” Peterson said. “[In Girl Scouts we learned] how to sell cookies and how to clean up a marsh.” From Peterson’s perspective, Scouts BSA provided more hands-on opportunities and real-life experiences than Girl Scouts did.

Previously, Peterson had participated in Girl Scouts for five years before she quit.

“My troop kind of fell apart, no one wanted to do it anymore, and that was in fifth grade,” Peterson said. Alpert and Peterson knew each other before they joined Scouts BSA, and decided to do it together.

“I’d say it definitely takes a certain personality type to be a girl that’s joining a program that’s known to the world as ‘Boy Scouts,’ but also you have to like the outdoors and that kind of stuff,” Alpert said. Both girls are enjoying learning how to tie knots and use an axe, and were looking forward to their upcoming camping trip. They did not hesitate to participate in activities predominantly associated with boys instead of girls.

Integrating into the Scouts program was a fairly easy transition for Alpert and Peterson, and their new troop has grown to match the amount of boys in the local troop thanks to a large number of young girls who joined.

“I think that the biggest difference between the [new] girls’ troop and the boys’ troop is that the boys’ troop has the older kids that are experienced and know what to do, and in the girls’ troop we are all at the same point. Like it doesn’t matter if you’re in sixth grade or tenth grade, all of us have the same idea of what’s going on,” Alpert said. Now that girls can join Scouts BSA, they are eligible to earn the title of Eagle Scout, the highest rank in the program. But because Scouts BSA only began accepting girls this year, that is proving to be difficult for many older girls.

“I’m not sure if there’s any way I can get to Eagle [Scout] at this point, but I’m just doing it for fun right now,” Peterson said. The ranking takes six years to achieve and is highly regarded by many universities and programs around the country. While boys can work themselves up to Eagle Scout from a young age, new female members of Scouts lack the time to do so.

“We pretty much just have two years to do what the boys do in six,” Alpert said. Both girls agreed that they wished they’d had the opportunity to join sooner, and although the program has taken a large step toward gender equality, they can’t make up for lost time or differences in experience because of gender. Despite the late start, both Alpert and Peterson are planning on continuing with the group until their senior year of high school.