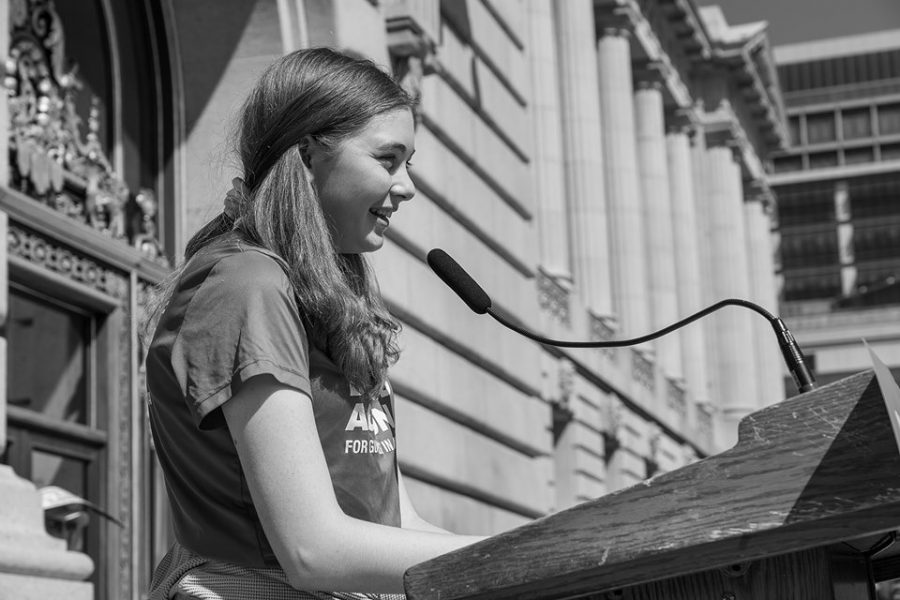 Gun violence has become the new normal in our country. In August alone, there were mass shootings in Odessa, Gilroy, Dayton, and El Paso with over 53 people dead in total. After shootings, people share their thoughts and prayers on Facebook and Instagram, while other groups promise action. But it feels like nothing ever changes. Against the odds, senior Isabel Williams is one of many youth activists working to make schools and communities safe from gun violence.

Williams’s interest in activism started early, at age 11. Her mother, Dana Spaeth, created a gun control advocacy video called “Dear Mom and Dad” that featured kids from around Marin. At the film’s premiere, she gave her first speech.

“[It] was about how it feels to be in lockdown, how it feels to feel like you’re not being protected by your parents, your teachers… and feeling like they’re powerless to protect you,” Williams said.  After being introduced to activism by her mom, Williams quickly started taking action.

She started the Tam Students Demand Action group her junior year, and joined Marin Moms Demand Action. She speaks at rallies, marches, and meetings, to present the student perspective, which she says makes people “sit up and listen.” Youth gun sense activists, often ones personally affected by shootings, have been some of the most effective in spreading awareness of gun violence.

While at a gun sense activism program in Washington D.C., Williams met some of the figures who have been most formative in influencing her as an activist. People such as Richard Martinez, whose son was killed in shooting at University of California Santa Barbara in 2014. He worked with their group, giving them advice on topics such as public speaking. While waiting for an Uber, Williams also met an older black woman from Baltimore, who told her about the rampage of gun violence in the neighborhood where she lived. The woman described how shootings had occurred almost everyone around her, from the playground to the grocery store. Nowhere was safe. And that day, the woman said, would have been her son’s birthday. He had been killed by a shooter a few years before. By the end of their conversation, Williams said she was “choking back tears.”

While hearing stories such as these strengthened her resolve to keep fighting for gun control, others helped her see the issue in a new way. It’s easy for the public to fixate on mass shootings, but they only account for less than 1 percent of gun violence in America. Williams said that meeting other kids from a program in Oakland had opened her eyes to daily gun violence in the streets and the different issues it involves such as racism and inequality. Often it seems like the main effect of gun violence is death. But it can also spread fear, PTSD, and depression throughout communities. Meeting a man whose daughter was paralyzed in the Columbine shootings and whose wife eventually killed herself, showed her the ways that, “gun violence radiates outwards.”

Like many, Williams is frustrated by the inaction of the government to pass major gun control laws. She wrote a new speech after the shootings in Dayton and El Paso, referencing the first she made when she was young.

“The words I wrote when I was 11 or 12, they still apply. They’re still true. I’m still scared. We’re still in lockdown. Nothing has changed,” Williams said. Williams wants to see the government finally taking action to protect kids and adults in our country with laws such as requiring background checks on every gun sale.

“If you can’t pass a background check, you should not have a gun,” Williams said. Another key piece of legislation is the red flag law, which is in effect in several states but not yet nationwide. This law lets family members or law enforcement officers petition the court to temporarily confiscate a person’s guns or access to guns. It remains to be seen if these laws will pass. Democrats, especially the 2020 Presidential Candidates, have been pushing gun control laws. But many powerful people profit greatly from gun sales, such as members of the NRA. Guns are ingrained in American culture and it may be hard to remove them.

Williams may seem like some kind of superhero teen, fighting for freedom everywhere, but she is also a normal high school student.

“It’s pretty much drama and gun sense activism,” she said about her day-to-day life. An avid member of Tam High’s theater program, CTE, she also enjoys writing, hanging out with her friends, and watching movies. However, these two parts of her life-activism and the normal high school experience-often mix. Williams often has mixed reactions when she tells other students about her gun control advocacy. There is tons of support, but also some pushback.

“It’s very common for high school boys … to either play devil’s advocate, or try to get into a heated debate with me,” Williams says. Although Marin is a majority liberal county, the main problem isn’t disagreement — it’s inaction.

Because of our political position, we tend to think we’re not part of the problem. In her opinion, people in Marin have a tendency to let the most prominent activists do all the work, mainly because we aren’t in daily contact with gun violence. Most of the exposure to it comes from the media and the very occasional shooting or bomb threat. However, Williams thinks people in Marin, specifically students, could all make a difference.

“We’re in a unique position because … we have power, and privilege and youth, we have this trifecta of unique characteristics that make us really well-suited to be activists,” Williams said. Williams describes how often people comment their support and approval on Facebook posts about different gun control groups’ work: “Well, if [our work] is so amazing, join us!”

There are many things that normal people can do to make a difference. You can text “enough” to 644-33 to get alerts about gun control events in your area. You can call your senators and representatives to voice your support for new life-saving laws. When you can show up to rallies and protests, you make a statement. Registering yourself and your friends to vote gives you a say in what happens in our country. Overall, Williams wants to dispel the myth that you have to be an expert in a topic to be passionate about it. Everyone can help stop gun violence. “Don’t let the enormity of an issue scare you … into doing nothing.”