Can you dig it?

A profile on the varsity volleyball team 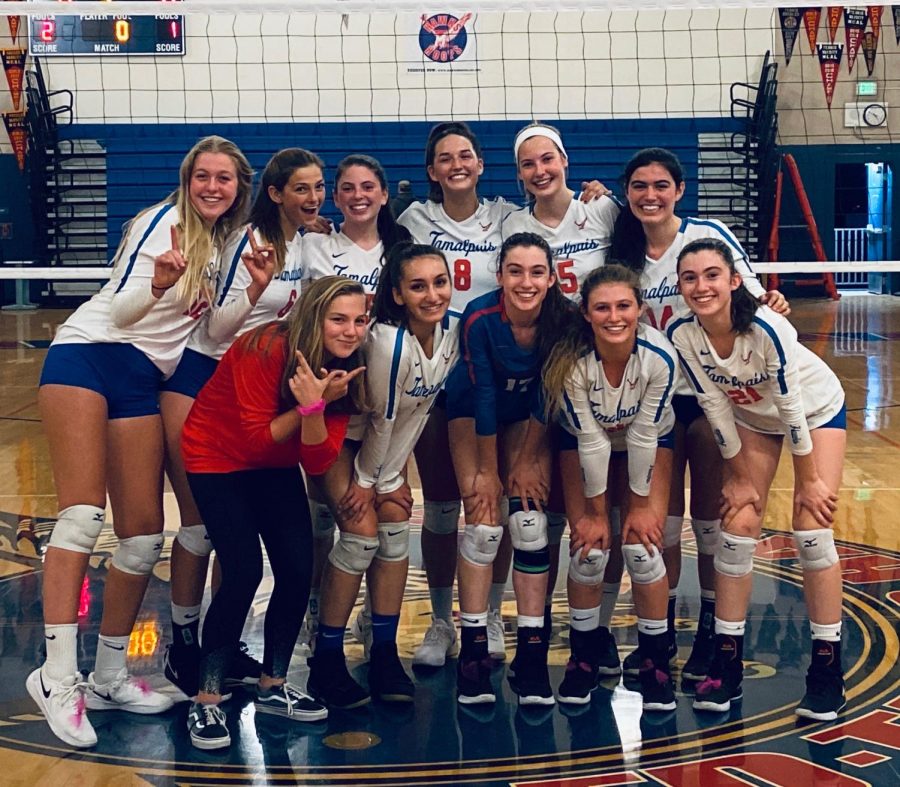 The 14 players of the girls varsity volleyball team enthusiastically patted each other on the back, with wide grins spread across their faces, they had just won their 17th match, bringing their season stats to a total of 18 and 9 making it hard to believe that only three seasons ago, the team had placed last in the Marin County Athletic League (MCAL).

In past seasons, the team has found it challenging to win matches. For four consecutive seasons from 2013 to 2016, the team placed last of the ten teams in MCALs. This losing streak came to an end in the 2017-2018 season, when the team finished in eighth place. Last season, the volleyball team also placed eighth overall. Currently, the volleyball team has played four MCAL matches, including wins against Novato and San Marin High School and losses against Drake and Redwood High School, placing them in fifth as of 10/16/2019.

“We have a really good team this year. It’s a group of very experienced, dedicated, hard-working, and talented group of players,” said head coach Ray Karter. The team’s current record of 18-9 is the best they’ve had since Karter began coaching in the 2016 season.

The current members of the team attribute their recent success to an increased level of commitment. “There’s a stronger will to want to play to the best of our ability, so therefore, the motivation is there, and it shows both in practices and in gameplay,” Senior Ella Bricker said. Bricker and senior Tate Martinelli are this years’ captains of the girls’ varsity volleyball team.

Junior Caitlin Smith agrees with Bricker’s reasoning for the team’s success. “I think the level of dedication has grown for sure,” Said C. Smith, “The people coming in are more experienced than past years, but they’re also just more committed and dedicated to making the team the best it can be.”

The volleyball team consists of students in all four grades, but this doesn’t stop them from getting along. “There is not a divide between the classes, and it doesn’t feel like we’re in separate grades. It feels like we’re really playing together as a team, which is important,” said Bricker.

“I don’t feel there is a divide between the grades on the team. Typically, you would think that there would be, but this team has proven the opposite,” said freshman Wesley Slavin. Regarding the upperclassmen on the team, Slavin said, “They have welcomed the freshmen and made sure to keep us included at all times, as well as make sure there is a strong bond between everyone.”

Bricker adds that it was extremely important for the team to spend time together outside of practices and games. “I think our biggest thing this year has been building team unity,” she said. “We make an effort to bond together outside of practice and really just support each other and it really shows on the court.” The team has lunch together every Wednesday, which Bricker believes has added to their ability to play more cohesively.

Not only has the volleyball team stood out as a unit, but individual players have gained recognition as well. Junior Olivia Smith’s performance as an outside hitter has grabbed the attention of the Marin Independent Journal (IJ). “I was awarded the Marin IJ Prep of the Week for two weeks in a row,” said O. Smith, adding, “I was really happy that they thought I was an athlete who made an impact those weeks.”

The volleyball team is looking forward to the rest of the season and getting the chance to achieve their goals. “Getting top four in MCALs is definitely our biggest goal,” said C. Smith. The team also hopes to advance further in the North Coast Section (NCS) than they have in previous years. “We have a pretty good chance of qualifying for NCS this season, so I’m looking forward to seeing the new competition there and seeing how far we can go there,” said C. Smith.

All team members strongly urge students to attend upcoming matches. “We would really love for people to come cheer us on at matches. The support would really mean a lot to us,” said Bricker.