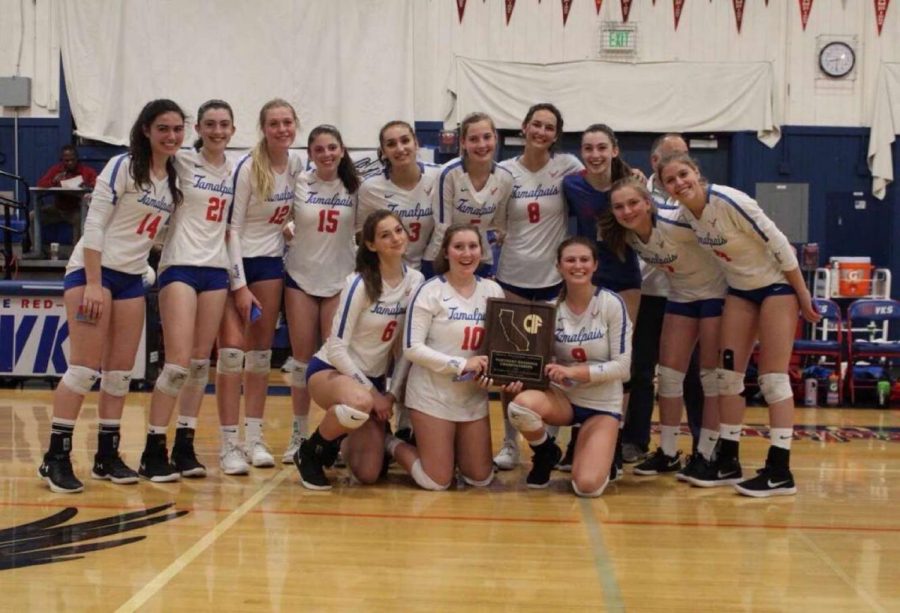 The girls volleyball team poses with their runner-up plaque after falling in the CIF regional state finals. (Courtesy of Talia Smith)

By Aidan Toole and Quinn Rothwell

The girls varsity volleyball team was defeated by Aptos High School in the regional state final of the California Interscholastic Federation (CIF) on Tuesday, November 19. After putting up a fierce fight, the team was beaten in all three sets. Each set ended with Tam managing to gain points, but it wasn’t enough. The finishing sets were 25-22, 25-17, and 25-22. In the past years of Tam volleyball, other teams have never come as close to a title as this year’s team was.

After the game, although the girls were sad, they were very proud of how far they had come and the growth they saw in their teammates. Talia Smith, a junior on the varsity team, said, “I think Amelia Sandgren, a sophomore who was put in to play back row for one of our outside hitters did a great job picking up everything. So, I was super happy with Amelia. I thought Ella Bricker played really well.”

During the competitive match, the stands were full of fans who could not get enough of the intense rallies. One fan, in particular, senior Lily Bowman, was very excited for the school’s turnout.

“It was so great the student body come together to cheer on a team that has defied the odds and made it all the way to states,” Bowman said.

Senior and co-captain Tate Martinelli,added how proud she was of her teammates and of their hard work.

“We were determined our whole season. We deserved to be as far as we were, we made history and that loss wasn’t something to be sad over … it is the beginning of a new era,” Martinelli said. She said that the reason the team was so close was due to the team bonding exercises the captains would hold. Building a strong team chemistry was very important for their success.

“The other senior captain, Ella Bricker, and I would either get everyone to go to the football games on Saturdays or go to someone’s house to bake cookies. Any time we could hold a team bonding we would do it, and it would benefit our on-court performance since we knew each other so well,” Martinelli said.