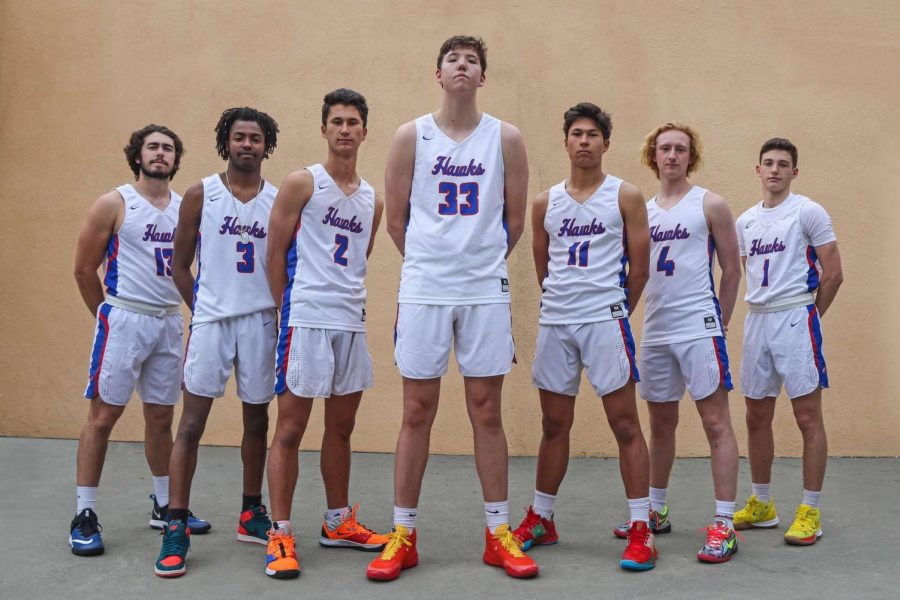 The seniors on the boys basketball team. (Courtesy of Tam Boys Basketball)

Girls varsity soccer
“Tamalpais girls Soccer has a very strong senior class. Our expectations are high. We also have a good balance of juniors and sophomores. We are looking forward to our opening game on 12/4 versus San Rafael. We play one game at a time and we are always aiming to play in championship games! Come on out and watch this great group compete!”

—Coach Shane Kennedy
Wrestling
“Tam Wrestling keeps growing. We have 50 kids on the team this year! We are loaded with some really tough kids at every weight and every grade. Leading the team this year are captains senior Nicholas Lyons, senior Santiago Vera-Buoncristiani, junior Ayman Hayat and junior Julian DeVries. Last year we had the youngest, least experienced team I’ve ever seen at Tam, with 10 out of 14 starters on varsity 9th graders or first-year wrestlers. And we were 10 points away from winning MCALs! After graduating only two seniors, we are looking like ‘the team to beat’ in league. We have a … group of sophomores and freshmen who will be the future of the program and I think we are going to be a premiere team for years to come. We host Redwood at home on January 15. Last year we beat them in a wild match in front of a packed crowd and I expect to beat them again this year, so tell the students to come on out and watch some high-level fighting.”

—Coach Preston Picus
Girls varsity basketball
“For the past seven years, we’ve made the MCAL playoffs. Last year, actually, was the first time we didn’t make it in like seven years, but we still made NCS playoffs. So we have high expectations. You know, we have eight players returning from last year, we have some new young players coming from JV. And we have two freshmen on the A-team. So it’ll start off pretty slow, but we have a good system, we have some girls who know our system, so our expectation, again, is to make the playoffs.”

—Coach Michael Evans
Boys varsity basketball
“Expectation is to continue to be a competitive team. I have eight guys back from last year that are seniors now, so we have some high expectations for ourselves: to work day in and day out, to get better every day. So hopefully that leads us to competing for championships. We’re in a tough league, we play a lot of tough teams, but we feel we’ve got to play the best to be the best. So we want to put in some good work, create good habits, put ourselves in the playoff mix, and then see what happens with that … Last year we had a tough end to our season, so I think we want to finish the season a little stronger. The group from last year had a good NCS playoff win that I think helped steamroll us into getting better this summer, and puts us in the position this year to have that experience, to kind of learn from last year, and how we finished the season. Learning from that, I think will be a valuable experience for them this year.”

—Coach Tim Morgan
Boys varsity soccer
“Coming back into the job our primary goal was to build a really strong team culture, just having really clear expectations about what it’s like to be a member of the Tam soccer program, what it feels like at practice with what the expectations are in terms of work ethic and team unity and things along those lines, but we’re off to a very good start with that …Step number two is just kind of, you know, to learn about who’s in the program, where the pieces sort of fit in. The long term is just to be playing our best soccer at the end of the year and hopefully we’re in the mix for a playoff shot. And if we’re in the playoffs, you never know what can happen from there.

“In my previous eight year stint as a boys coach, I found that by having a really solid culture in place, it tends to lead to success long term, year in and year out, as opposed to just one year being good. And then one year, having a down year. You’ve got that culture in place where everybody’s just really excited about being a Tam soccer player year round and not just during the soccer season, then that that tends to lead to success.”