The realism of Megan Engelbrechten 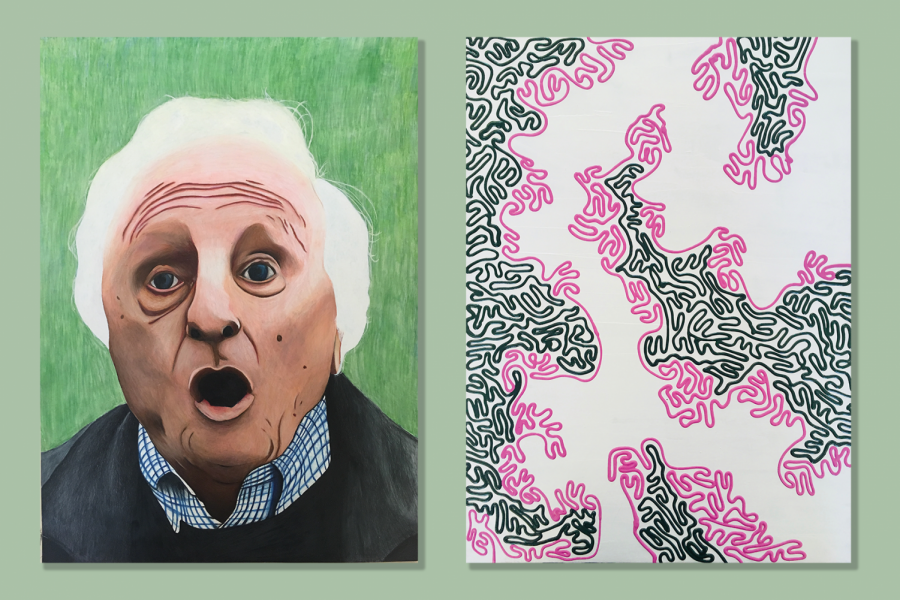 Stepping into the art room, I was quick to notice the series of abstract pieces in the corner. They used shapes, textures, and colors to paint emotions that immediately drew my attention. The artist of these series, senior Megan Engelbrechten, allows her mind to direct what she creates to whatever feels natural.

She does not consider herself the typical artist, seeing that she doesn’t feel her art is what defines her. Her notebooks are not filled with intricate doodles, as a typical artist’s might. “My doodles look terrible in comparison to my other pieces,” she said, laughing. Engelbrechten is not particularly fond of doodling, which surprised me.

Comparing herself to other artists, she was hesitant to consider herself an “art kid.” Yet her creations suggest there is no lack of talent an art kid would traditionally have.

“It’s sort of a part of me that I don’t get to share as much,” she said. In addition to taking art, Engelbrechten is a strong student and president of the environmental club.

She continued, “[Art] is definitely a part of who I am and what I spent a lot of my time doing, but I don’t always bring it up.“

I have a hard time finding the words to capture the level of detail she puts into her pieces. “Ever since I was little I really liked romanticized realism,” she told me, “especially the Renaissance period where they had perfect porcelain skin and smooth blending.”

Through spending hours on a singular piece, Engelbrechten is able to create something magical. The details of her art are done in such a way that illustrates the illusion of a photograph —  though it’s created by colored pencils.

Over time, this style of realism began to take the pleasure out of creating art for her. “I was working on this really big portrait, colored pencil drawing of a woman’s face and I had spent months on it and … I was just so fed up with it. I just I got so tired of working on it and feeling like I was making no progress,” Engelbrechten said.

Despite praise from teachers and classmates, she wasn’t happy with how her pieces were turning out. “I didn’t feel like it was good enough — it wasn’t real enough. So I was disappointed and frustrated,” she said.

Engelbrechten questioned the type of art that she had been creating and decided to try something new. “I just said, you know what? I’m just gonna grab the giant tub of white paint … and do something abstract with it because it seems so much easier.”

She described her recent style of abstract art as a new realm of creativity. “I did a complete 180,” she explained.

As all things do, abstract art presented a new world of challenges. Acrylic paint, her new medium of choice, is not easy to work with. Often times, the paint develops air bubbles or does not spread consistently. “I’m a bit of a perfectionist, I don’t really like it when the paint decides to [do its own thing],” she said.

It was challenging at first, but acted as a learning opportunity for her as an artist. “It’s sort of like coming to terms that mentally, I can’t control everything,” she said.

Despite how frustrating it can be at times, Engelbrechten has come to love her new style of art. “Most of what I’m working on currently is led by showing what the paint does naturally. It also shows what my mind is doing naturally,” she said.