Take a look at one of Tam's lesser-known sports teams: sailing. 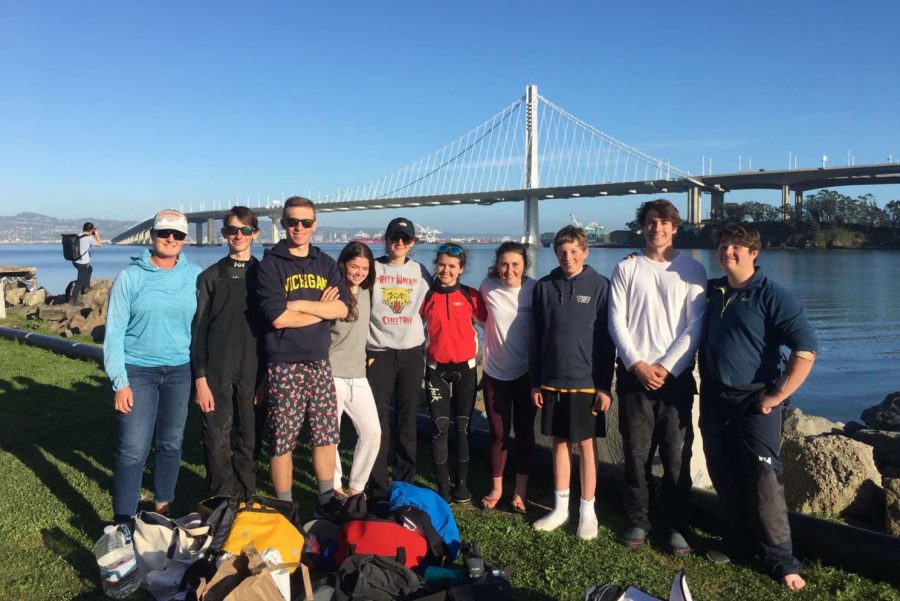 Senior Luke Marshall never expected to sail in high school, but after trying it out for fun his freshman year, he never looked back. “It’s so different from any other sport,” Marshall, who is now co-captain of the sailing team along with senior Lily Hock, said.

Sailing, a sport officially labeled as a club, is one of the lesser-known sports at Tam, but once people try it, they often find that they are reluctant to stop. “I started because it sounded cool, so I tried out for the team. I got on and I never left,” senior Josh Holzer, who has been on the team for all four years of high school, said.

One of the most unique aspects of sailing is that it is both a spring and a fall sport. “There’s a core group of people that stay on all year,” Holzer said. Others rotate in for only one season, such as Marshall, who is also a member of the football team during the fall.

“Typically when kids join the team they’re at a beginner to intermediate level so it takes them a while to learn,” coach Renee Corpuz-Lahne said. “Sailing has a very steep learning curve and we’re teaching them not only how to sail but how to race competitively at the same time so it can be a bit challenging.” But after six years with the team, Corpuz-Lahn has seen how quickly anyone can improve when motivated. “It’s not an easy sport,” she said. “So [members] need to like the water and be athletic.”

“Even if you don’t really know how to sail you can start on JV and you’ll learn a lot pretty quick,” Marshall said.

In season, practices are only two days per week, but members of the varsity team often attend regattas, or races, on the weekends. “We go to Santa Barbara, LA, or Newport for regattas … for the whole weekend,” Hock said.

“The regattas can be kind of tough, some days you’re on the water for seven hours,” Marshall said. But despite that, weekend regattas are where the team forges some of their closest connections. “You get so close with the people on the team because you’re traveling and staying together on some of the regattas.”

“Luke and I have made some of our best friends on the team,” Hock said. “We used to have three practices a week, and then every other weekend we carpool [or] fly to regattas … and stay in hotels the whole weekend.”

Holzer agreed. “When you’re traveling and you’re going on flights or you’re taking five-hour-plus car rides it’s different [than other sports],” he said. “We get to go out, we all hang in the same room and do stuff together … Our coach always emphasizes to ‘all be smart and all be together.’”

Having a close community is strongly emphasized in the team, and a big part of the captains’ roles is “making sure [that] everyone feels welcome and safe,” according to Corpuz-Lahn. Sailing can be hard and sometimes dangerous, and having a strong sense of teamwork is important in doing well.

“There have been plenty of days where there’s been no wind and we just sit there,” Holzer said, but on other days, “It will be ‘nuking,’ where there is an incredible amount of wind, waves, everything, [and] adrenaline is always high.”

Hock, who has injured herself twice onboard, agreed. “[If it’s really windy] you can be capsizing and people can get hurt,” she said.

“The sport is mentally draining.” Holzer said. “You did not have a good day of sailing if you aren’t tired mentally or physically.”

Signups for sailing open in the fall at the club fair where “people that are interested can come chat with current team members,” Corpuz-Lahne said. She, along with most members of the team, strongly encourage people to give the sport a chance.

When explaining his love for the sport to his friends, Holzer often describes the rush that comes with it. “In sailing there’s an infinite amount of variables, from the wind to the current to your partner or your crew to the conditions of other boats … you’re constantly checking around you,” he said.

“It’s a really really fun sport,” Hock said. “I hope more people at least give it a try.”