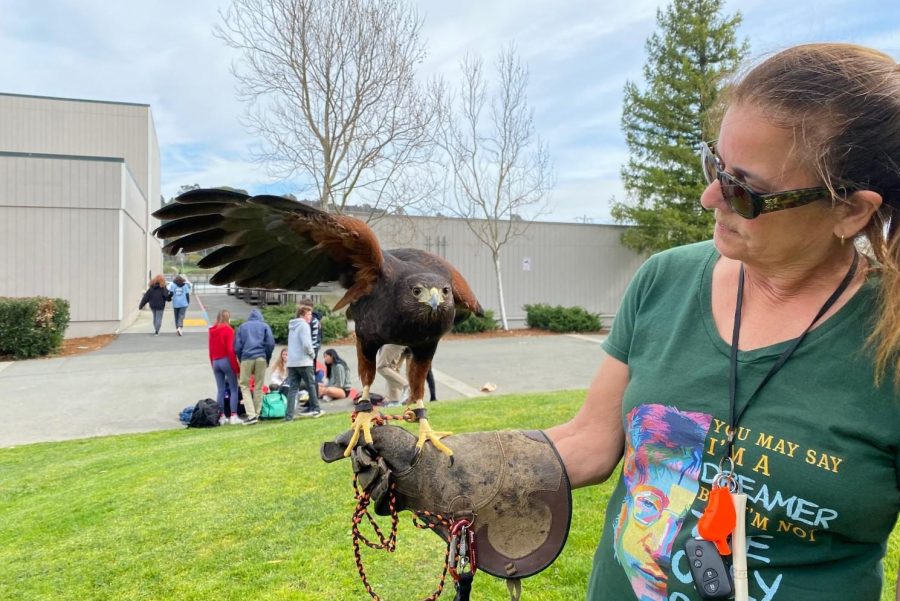 The MVMS campus has a history of large populations of seagulls disrupting the school, according to students and faculty.

“A teacher came and told me … that when the flock flies over, it sounds like it’s raining outside,” the on-campus falconer, Jennifer Hosperman, said. The school’s proximity to the marsh and bay inlet combined with leftover student food scraps draws many birds. It is estimated that around 30 seagulls visit the school daily and fly over the students during lunch.

“It’s like that movie The Birds but instead of getting eaten you get pooped on,” eighth grader Jake Donohue said. At lunchtime, some students described the flocks of seagulls above them as a “seagull apocalypse.”

“There’s this wave of seagulls, and everyone’s like ‘Yo, seagull apocalypse’ and everyone starts screaming and then we just all dip to the overhangs, people just run to the seventh grade area, you go under the stairs and just try to not get pooped on,” eighth grader Dequarius Martin said.

“You’re not a full-fledged staff member at MVMS unless you’ve been baptized (pooped on) by a seagull,” MVMS assistant principal Mark Nelson wrote in an email. “In my second or third year at MVMS, I was in the middle of reading a few 8th graders the ‘riot act,’ saying something to the extent of ‘I’m not going to put up with any of this crap.’ Right as the word ‘crap’ came out of my mouth, a seagull got me on the head, shoulders, neck, and shirt, and one of the kids said, ‘Well, you’re going to have put up with that crap until you clean it up.’”

Students have become accustomed to the aggressive behavior of the seagulls, where seagulls rip open lunch boxes if left unattended or even try to take food directly.

“One thing about the seagulls [is that] they’ve been conditioned to know that when the bell rings they come out for lunch,” Jana Barkley, master falconer and the owner of Aero Falconry, said. “The problem is the mess left by the students … they leave so much food mess behind that it’s so inviting to the seagulls that that makes them very aggressive and that makes them actually come down.”

According to multiple accounts, the Friday before the hawk’s arrival, one student threw an apple at an airborne seagull, knocking it out of the air and killing it.

“Seagulls are a protected species under the Migratory Bird Treaty Act. It is a felony to harass native species,” Barkley said. “So that’s where we come in because we can harass them and send them somewhere else in their territory [without harming them].”

The program has been met with positivity from MVMS students and staff.

“This program has been successful so far. We have noted seagulls and other birds scattering from the campus at lunchtime when the hawk is present,” Amanda Finlaw, the executive assistant to the superintendent of the Mill Valley School District, wrote in an email.

The program is only scheduled to continue through April. Toward the end of this month, the seagulls naturally migrate north, so the school anticipates the problem to dissipate on its own for the remainder of the school year. However, due to its success, the district is interested in working with falconers in the future.

“Next, this method will be brought to Strawberry Point Elementary School, which has a similar seagull problem,” Finlaw said in an email. “We may use it at other school sites and could use it again at MVMS in the future if needed.”