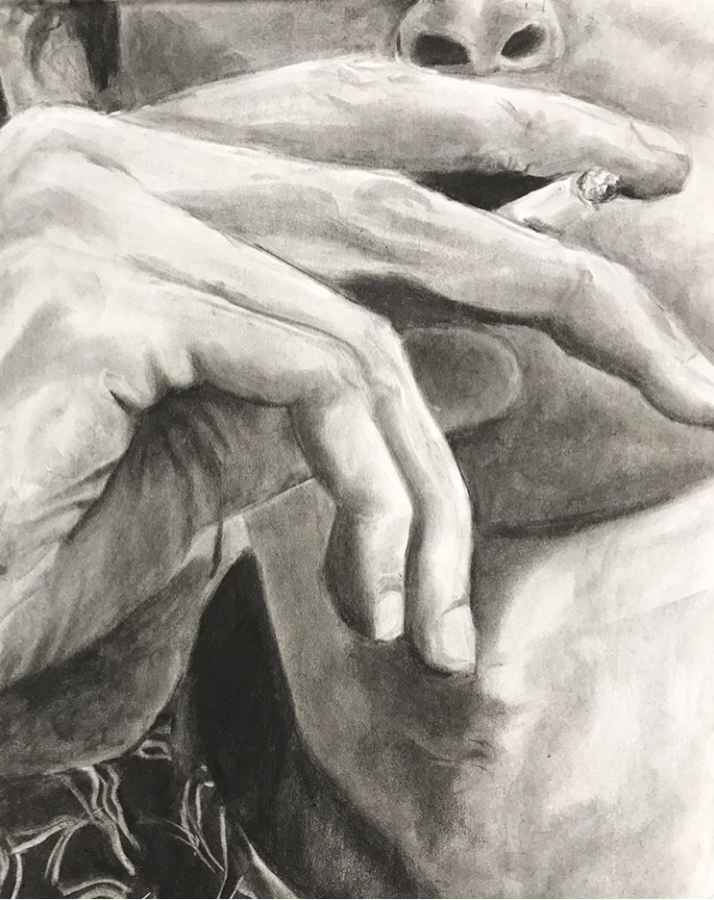 Trigger Warning: This story contains sensitive content regarding various Tam High students’ experiences, involving alcohol and drug abuse from their parents and guardians. The purpose of this piece is not to speculate on students’ trauma but to spread awareness of students who have grown up with family addiction.

“It was my mom’s birthday, and we were going on a hike. We were all in the same place and my dad got a phone call from his mom and he just told me, my cousin died last night,” Sarah, a Tam student, said. Sarah’s cousin, who was 29, had been in a car accident. The driver drove into a tree under the influence of alcohol, killing everyone else in the car.

According to the nonprofit organization Alcohol Justice, “More than 28 million Americans have seen at least one parent suffer from alcohol.” The teenage children of these parents have to adapt and accommodate to teenage culture — such as recreational drug and alcohol use — differently based on the trauma they have received from their guardians.

From growing up with an alcoholic and drug addict father, Sarah experienced flashbacks to her childhood when her cousin died.

“Alcohol was always an iffy thing, because my dad was an alcoholic until I was nine and he went to rehab. I still drank, [but] after [my cousin’s death], I just stopped. It was scary for me after that. I’ve tried to drink but I’ve never gotten past three shots. I just feel bad,” Sarah said.

According to the healthcare company American Addiction Centers, a combination of genetics and environment can cause about 40 percent to 60 percent of a person’s risk of addiction.

Sarah said, “I don’t know if the roughest part of my cousin dying was him actually dying, but watching the people around him, like who it affected, like my aunt and his sister. That was really hard.”

“[My dad] would pick me up from school because my mom had to work. He was drunk. Drove us home and it was kinda normal at this point. I didn’t know it was a bad thing,” Sarah said. “I didn’t know he was drunk at the time. I was just a kid. I just thought he was crazy.” Back then, being surrounded by addiction, Sarah didn’t register that it was not normal. “We would drive over to the convenience store. He would get me a bag of Cheetos, but then he would also get a bottle of vodka. And I would open the fridge and find only vodka.”

Like Sarah, many other students at Tam and in Marin County have faced some sort of association with addiction in their life. “I remember coming home one night and she was throwing plates at us,” Matt, another Tam student, said. Matt was raised with an alcoholic mother who presently still uses. “She goes off and on [of being sober],” Matt said. “[She’s been to rehab] six or seven times. I visited her and talked to her on the phone.” Despite Matt’s fears of incriminating his mother, he explained how she drives him consistently while drunk, and sometimes he will have to call a family member to get him out of the house. “I told her I didn’t feel safe living there. I don’t really like my stepdad and then, I don’t know, I feel like at my mom’s [I] always have to lock my door when my mom is drunk,” Matt said.

Matt has been living with his father for five weeks now. Matt describes his mom as an amazing person when she’s sober, and hopes that one day she will overcome this illness.

Many kids during these moments feel isolated and unsupported by their family, causing them to feel extremely alone during their upbringing. In Sarah’s childhood, she had limited friends and a mom with a full-time job, causing her to fall into the primary care of her father.

“So it’s kinda hard, because other people recall their childhood memories and have really good memories and then I think of an abusive, alcoholic father,” Sarah said, trying to stop the tears from building in her eyes. “Sometimes the bad parts overtake the good parts.”

“I do have depression, but I don’t know if it’s genetic, or maybe because of that. It has affected me a lot. More so my cousin now, I think of that every day,” Sarah said. “I don’t know what can help me. I went to therapy for a really long time. I started when I was three.”

When Sarah was nine, her father received a court-mandated order to go to rehab. If her father didn’t comply, he would never have custody of her again. “It felt like months but I didn’t call him once,” she said. “I was too scared to. I’ve never talked to him about it.”

Sarah’s childhood caused a damper on her relationship with her father. They have never talked about his addiction, or the mental damage it has caused her. “I do want to [talk to my dad] but I’m scared. We’ve just never had — this is weird to say, but it’s not like we’ve never got that emotional with each other,” she said. This lack of communication is an ongoing issue in their relationship.

According to healthcare company American Addiction Centers, “The relapse rate for substance use disorders is estimated to be between 40 percent and 60 percent.”

To this day, Sarah worries about her father potentially relapsing. Sarah said, “sometimes I get scared. I was scared when my cousin died he would relapse. Whenever something bad happened or he would get stressed he would go to drinking. So I don’t know, sometimes it scares me. He was addicted to heroin, alcohol, and cocaine … so who knows?”

Lucy, a Tam student, had a firsthand struggle with her mom’s consistent relapsing. “She did come back for about a month, picked me up one day, and she clearly had been using drugs and she brought me to this condo housing complex and was like, ‘I’m going to buy a house here. We’re going to live together. So pick your room, do you like this?’ And a week after that, she disappeared again, and then after about three months, she passed away,” Lucy said. Lucy and her family had tried to get her mom into rehab. However in 2014, after a lifetime of addiction to opioids, Lucy’s mom intentionally overdosed during her first time using heroin.

“Honestly, I just remember being completely like my mind just went blank. It’s like I couldn’t hear. Like I was screaming so loud that I couldn’t hear myself. It was like my ears were ringing. It was like I got all the air punched out of me. I couldn’t even think. I couldn’t even react,” Lucy said. “I stayed home, I just kind of isolated myself to just process what had just happened. I had never ever experienced death in my life. The most major death that anyone could experience happened. I basically just hid out in my room and stayed at home,” she said.

Before her passing, Lucy’s mom’s presence had become less frequent. “She called my dad one night, on a school night, and was like, ‘I can’t take her anymore, you have to take her.’ I grabbed all the stuff I could in a suitcase. And I just went to live with my dad permanently. I wasn’t informed of anything when I was a kid but I would always ask, where is she, what’s going on, and I’d have a different response from my family members. Like my dad would tell me, she’s in Arizona at this detox facility. And then my aunt would tell me she’s in the streets. And others would tell me she was in the hospital,” Lucy said.

Regarding Lucy’s needs for support and respect, she said, “I think the people around me were really supportive. People just need to recognize that I don’t have a mom. It’s just kind of awkward when people are like, ‘Oh, can we go over to your mom’s house?’ Maybe just recognition, but I don’t want to be a spectacle,” Lucy said. “The people who care about me, that’s who I want to care about me,” she said. After her mom’s passing, Lucy developed IBS, irritable bowel syndrome, caused by her severe anxiety.

Ted, a former Tam student who is currently enrolled at San Andreas, has been diagnosed with anxiety from a lifetime of living with parents who have substance use disorders. Although Ted is formally undiagnosed, many of his friends believe that he has depression. “[My parents’ addiction] just makes me stressed and angry,” he said. Ted has never talked to his parents openly about their addiction because he has tried to disassociate himself with them as much as possible.

His father is still an active addict, while his mom is a recovering addict. This recovery followed a court order for rehab due to endangerment of children and public intoxication. “The police showed up while my mom was doing blow in the living room. [This was] while me and my brother were eating in the kitchen.” Both of Ted’s parents were addicted to cocaine, pills, and “would use anything and everything constantly,” he said.

Ted has been living in and out of his house since he was six years old. “My mom and dad put a fourth of Xanax into my juice when I was 11. It fucked me up and confused me. I couldn’t trust them after. They did it because I seemed stressed out. I don’t really trust them fully,” Ted said. The longest time Ted has been away from his parents was for two years, when he lived at a family friend’s house. “I don’t go home a lot, and [I] do reckless things because I think no one cares,” Ted said.

Ted said that the stress from his parents’ situation had affected him socially and academically: “[I] had more responsibility at a young age [and that has] made me kind of angry now.” Ted’s brother is four years younger than him. “I had to raise my brother and find money for food. I would always find my ways to make money: steal, sell drugs,” he said.

Ted holds a lot of resentment towards his parents, “for believing in them for so long that they would ever care.”

He said that when other people discuss their childhood experience, he feels “most times jealous, not sad, because it is what it is.”

Children nationwide, statewide, and within Marin are affected by the same traumatic experiences that students such as Sarah, Matt, Lucy, and Ted have had or are going through. To decrease the apparent mental health impact on children living in these conditions, an environment of support and awareness of these situations within our own community is crucial. The following list contains resources for outreach.

Alateen is a mutual support group for kids who have or have had loved ones who are addicts, to express and share memories and stories, with counselors to help people cope effectively with these experiences. Alateen meetings can be found in Corte Madera, San Francisco, and Oakland.

Huckleberry is a student youth program that has a substance abuse counseling program that provides both group and individual support, for kids who have family members that are or were addicts. This program works with high schools in Marin County, including Tam.

Students can also visit the Wellness Center or their counselor for help or more information.