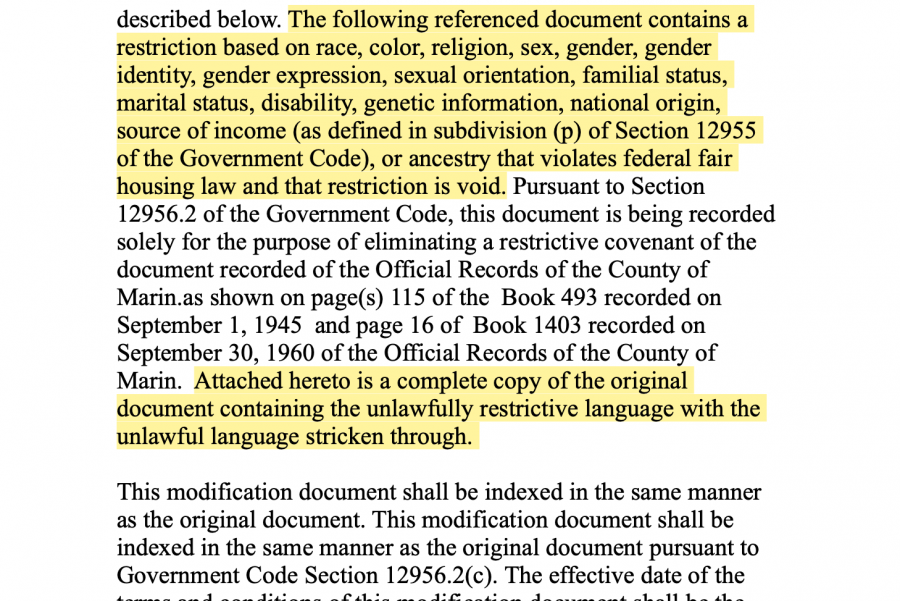 The Community Service District (CSD) of Muir Beach unanimously voted on July 22 to begin the process of removing racist language from property deeds. The CSD identified more than 80 deeds that contained terms prohibiting owners from selling their property to anyone “except those of the caucasian [white] race,” a result of historical redlining practices.

In the 1930s, the federal government evaluated neighborhoods throughout the country to categorize their desirability and investing potential. This process was dictated by racism, and communities that housed a majority of Black residents were “redlined,” meaning the government deemed them as “hazardous.” As a result of this, banks would refuse to approve mortgages and loans to people of color, but they did approve them for white people. This created vast inequities in the housing industry and caused property values in predominantly white neighborhoods to increase while homes in the redlined neighborhoods declined in property value.

Although the racist clause found in Muir Beach property deeds has no legal implications as a result of the Fair Housing Act of 1968, “It’s a moral stand that we need to take,” Gary Friedman, a lawyer and one of the five directors of the Muir Beach CSD, said.

Friedman sent an email on August 26 to the residents of Muir Beach, informing them of statements found on over 80 deeds that dictate that the property can not be occupied by “any person except those of the Caucasian Race, except that persons of other races may be employed as household servants.” The clause also prohibits selling or leasing any part of the property to “persons other than those who are members of the Caucasian Race.”

Friedman explained that he’d been “shocked and haunted” by the language when he read it while buying his own house in Muir Beach. Muir Beach local Amy Utstein stated that she was “Disappointed but not surprised. In this country, there’s a lot of shameful secrets or not so secret things in our past.”

The CSD urged residents of the community to “undo this egregious, historic wrong” by contributing an estimated $25 to $35 per household to pay for the legal process of removing the language from the deeds.

“We’ve now compiled all the deeds and are now matching them to the addresses,” Friedman said.

Homeowners will receive forms that contain the restrictive clause, which they can then eliminate from their deed. A repudiation form will also be included, which allows homeowners to sign a statement that condemns the language used in their deed. “We repudiate this clause and are ashamed for our country that many once considered it acceptable, and state that we welcome with enthusiasm and without reservation neighbors of all races and ethnicities,” the form reads.

The CSD is aware “that it has no legal effect.” However, they believe that the clause “sends the wrong message … we are welcoming people of all races to Muir Beach,” Friedman said.

The CSD said it will continue to investigate other properties within the community that contain the racist language in order to have it removed and expect the process to be finalized by November 1.