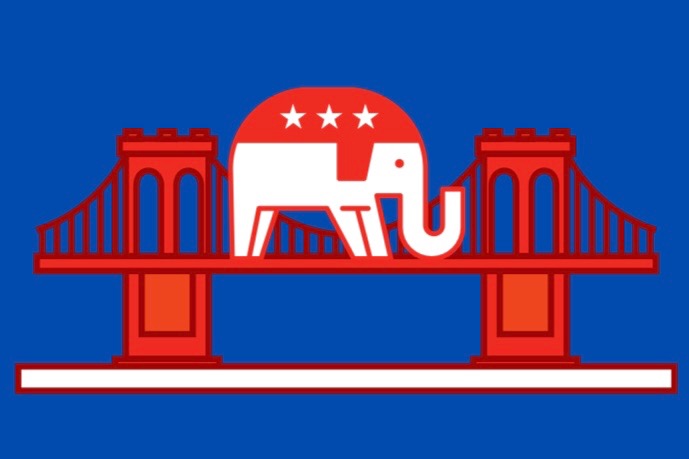 If you drive down any street in Marin you’ll pass a sea of Biden-Harris signs, usually completed with other lawn decor synonymous with the Democratic party. It’s no secret that Marin, one of the most affluent counties in the United States, is a very liberal one as well.

In this November’s election, 82.5 percent of Marin County voters cast their ballots for President-Elect Joseph R. Biden, the second-highest lead for Biden in any California county, only topped by San Francisco County with 85.2 percent of the vote going to Biden. It may be difficult to imagine a prominent or even existing group of conservatives in Marin, but about 24,000 people in the county voted for President Donald Trump this November.

Devon Fenimore is a Los Angeles native and a Mill Valley resident, as well as a registered Republican who voted for Trump in both 2016 and 2020. Fenimore describes herself as a fiscal republican and a social liberal, she is pro-choice as well as a supporter of LGBTQ+ rights.

Unlike many conservatives in early 2016, Fenimore said Trump was her ideal candidate from the beginning, in part because of his political stance on immigration.

“I’m probably a weird example because in 2016, even when there were 20 different candidates . . . Trump was my dude, from the very beginning. I really aligned with his views on immigration, living in Southern California, that’s one of the areas of the country that can relate to the influx of immigration, how that affects the state’s economy and overcrowding of schools. There’s a lot of aspects of his immigration [policy] that really kind of struck a chord,” she said.

Fenimore also expressed her liking of Trump’s unfiltered, brash, and non-politically correct rhetoric. “He was one of the first candidates to speak up about the whole wave of political correctness that has entered our lexicon. I was like, finally, finally, somebody is speaking our language and somebody is actually bringing up stuff that nobody has been talking about. . . . Sure, does he make mistakes? Everyone does. I haven’t wavered [in my support for Trump],” Fenimore said.

The Trump administration has faced criticism for his implementation of a “Zero Tolerance Policy” and their treatment of immigrant children at the United States-Mexico border. A reported seven children have died in Immigration Custody since 2018, along with accusations of forced hysterectomies and unlivable conditions, according to whistleblowers and a Department of Homeland Security (DHS) inspector general report from January 2019. Considering this, Fenimore responded, “I don’t believe this is his thing [the children being separated from their parents]. It started with Obama. Are there kids in cages who don’t have parents? Yeah probably, because they came over here with people who are smuggling them in. Is it a sad situation? Of course, it is. But is [Trump] being demonized for that? Yes.”

In response to a large influx of unaccompanied minors crossing the border, the Obama administration had constructed the detention center as a 72-hour holding facility before transferring the migrants to the Office of Refugee Resettlement (ORR) for temporary housing. While, under the Trump administration, children crossing the border with parents were separated from their families under Trump’s directed “zero-tolerance policy,” and some were then held at the center for over three weeks.

Julie Champion, a Mill Valley resident born in Los Angeles and raised in Minnesota, shares similar views with Fenimore, describing herself as a fiscal conservative and social moderate who leans Libertarian.

“I continue to believe in personal freedom and accountability, smaller government and less government interference, strong military and support of vets, the Second Amendment, secured borders, and that welfare should be temporary and abortion shouldn’t be a form of birth control,” Champion said. She describes her shift towards more liberal social views as a result of her friendships with those in the LGBTQ+ community and her distance from religion.

“I grew up in a Baptist church. I have not attended in years, and my views on social issues have changed since those days . . . However, one of my closest friends is gay. I think the government has much bigger fish to fry than who loves whom,” she said.

Living in Marin since 1987, Champion expressed frustration with a community in which she sees as virtue-signaling and intolerant of other beliefs.

“I think Marin is sadly out of touch. It’s an extraordinarily privileged enclave of virtue signaling NIMBYs [Not in my Backyards].” Champion said. Champion feels many Marin residents are hypocritical and performative in their political activism. “People who make themselves feel good by putting Black Lives Matter signs in their yards but oppose a low income or multi-unit housing in Mill Valley because it will ‘change the character of the town’ or impact traffic. ‘Sure, we need low-income housing for “those people” but not here. ‘They’ need to live somewhere else.’ . . . Or they’re super worried about climate change, but they have how many kids?”

While Fenimore and Champion are representative of an older generation of conservatives in Marin, Barrett Nichols is part of a small group of young conservatives in the Bay Area. Nichols graduated from Tamalpais High School in 2020 and currently attends a university in Montana. Nichols describes how his perspective shifted from liberal to conservative during his time at Tam.

“I used to be a liberal before sophomore year, but that was because I never actually did any sort of political ‘research’ of my own and looked at the other side’s perspective to see what I really believed. I had just gone along with what everyone told me, my political views were a product of my mom, my friends, social media, and the mainstream media,” he said.

Nichols reflected on how his strong support for gun rights, limited government, and fewer taxes developed.

“My views started to shift after the Parkland mass shooting. My english teacher had us do a research project about gun control in which I had to look at both sides of the equation. After doing some research, I ended up realizing that I agreed much more with the Republicans on gun control than the Democrats. After that I guess I ‘woke up’ and started to think for myself when it came to politics,” he said.

While Nichols, like many Republican voters, has expressed distaste from Trump’s personality and rhetoric, he favors Trump’s accomplishments in office. “[Trump] has been very tough on both China and Iran, which I 100 percent support. He has basically ended ISIS [the Islamic State of Iraq and Syria], which is just a huge accomplishment. We’ve been spending time, money, and most importantly, our soldiers’ lives, fighting terrorist groups in the Middle East since before I was born. He’s the first American president to meet with the leader of North Korea. No other president has even come close to that. Minority unemployment is at an all-time low under his administration, as well as unemployment in general. These are achievements that I believe are recognized as ‘good accomplishments,’ or at least should be, by both Republicans and Democrats,” Nichols said.

Many, such as Dr. Michael O’Hanlon, a foreign policy advisor at the Brookings Institution, have stated that Trump’s claims surrounding his success in the dismantling of ISIS are misleading, as the Obama administration has been credited for laying the strategic militaristic framework necessary for the destruction of ISIS, as well as liberating roughly 50 percent of ISIS-controlled land. Additionally, before COVID-19, unemployment had been steadily declining, a trend that began with Obama-era policies implemented to combat the 2008 recession.

Nichols expressed his frustration with political polarization and felt unable to express his views for the majority of his life living in Marin. “I’ve seen numerous re-posts of how everyone who voted for Trump is a racist, sexist, etc, some going far enough to say that it’s okay to have friends with right-leaning opinions, but you should never be friends with anyone who voted for Trump because they are a terrible person. This type of rhetoric is unfathomably immature, intolerant, divisive, and downright disgusting. These people claim that Donald Trump is dividing America, yet they harbor an intense hatred towards half the American voting population,” he said.

Mike Simmons, a Mill Valley resident from Southern California, shared Nichols’s sentiment. Simmons is a registered Republican and with a mix of liberal and conservative views. “I’m a big outdoorsy guy. I like to surf, I like to go hiking, so the climate is a big deal to me         . . . If you live in a state like California, where we spend so much on everything, [California is] very fiscally, irresponsible, I think. I think that people who make more money should pay higher taxes, but I think most like-minded people feel that way. It’s just a question of how much more, and I don’t identify as very liberal on that. I don’t think that people should be paying 70 percent of their income in taxes.”

Having voted for Hilary Clinton in the 2016 primary, Simmons felt his lean towards the right had largely to do with the political climate of the Bay Area. “[Moving to the Bay Area] probably made me more conservative than I was previously. I know a lot of people, who, it’s kind of the same way. It’s because I don’t feel like there’s a free form of dialogue. You question why everyone is talking in the same way and there’s no opinion. People tout diversity, but people don’t tout diversity of thought. In Marin, but in the Bay Area in general.” Simmons stated moving to Marin has made him more uncomfortable expressing his beliefs than other places he has lived. “Oh yeah, totally, in the Bay Area, very uncomfortable [expressing my beliefs.] I think Southern California I was a little more comfortable because there’s pockets of more conservatives thinkers, but it’s also interesting that I have a house in Montana that I visit regularly. People here think a lot differently and you know the dialogue is different.” Simmons expressed a frustration that is prevalent in the Bay Area. He, like many others, feels the hostility and inability to listen and understand other perspectives, which hinders debate, and change. “I talk liberal ideas with people [in Montana] and there’s no problem with it. People can talk about it, you can get into healthy debates with people about it, and they love and respect you for it. I just don’t see it the same on the other end of things.”

Barrett Nichols is related to one member of The Tam News staff. This was unknown at the time of the interview, and no information has been withheld that creates a conflict of interest.