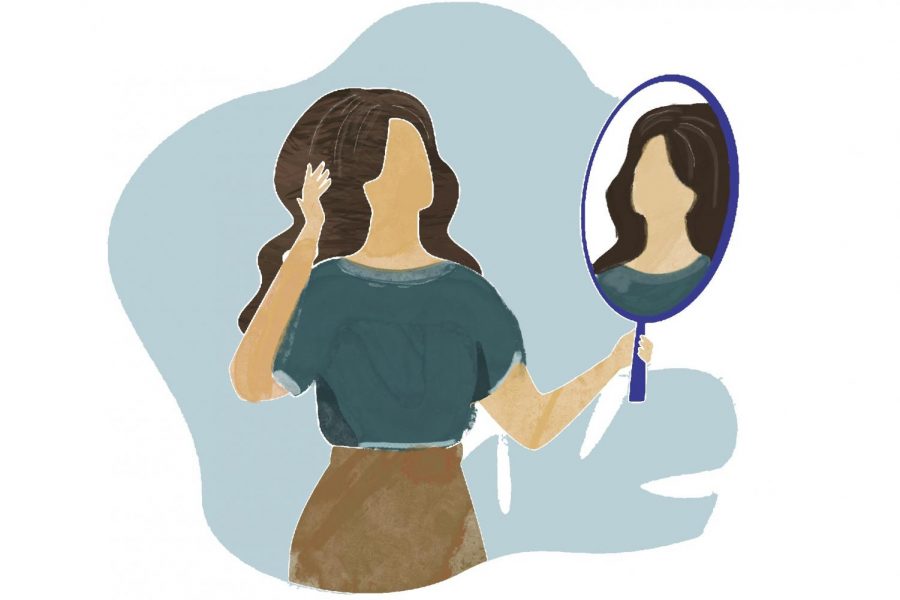 No one really knows how to tell someone they have something in their teeth, or have dust on the back of their pants, or really anything else potentially embarrassing about their appearance. Typically, in my experience, you subtly acknowledge the “flaw” to the person without making it seem like you’re judging them. The same should apply for spotting gray hair on someone’s head.

And usually, it does— when that person is 40+ years of age. But for some reason, the same cordial approach to telling someone they have gray hair does not apply to teenagers.

I am 17 years old and have quite a bit of gray hair. It’s supposedly genetic, and easily spotted considering the rest of it grows as dark brown as you can have.
I found my first gray hair in eighth grade, and honestly, I was more fascinated than I was insecure. Especially considering that it had only been one strand, so I wasn’t too worried about it. I pulled it out—along with some other innocent brown hairs—and examined the curly-whiteness. I washed it down the drain and went along with my day, not feeling the need to be concerned.

I must have developed many more over the years, but hadn’t noticed until the summer of 2019 while I was in New York for a journalism opportunity.
One day, I noticed a sizable amount peeking through my thick hair at the top of my head. My first instinct was positive, thinking it looked kind of cool. It was almost amusing on some level.

But my next reaction was a bit darker and more out of shame. I tried maneuvering my hair to cover it, hastily raking my fingers through my scalp until I settled on a ponytail instead. I left the bathroom, and as soon as possible, Googled if this was normal for a teenager. WebMD explained that gray hair can result from long-term stress, and there wasn’t really any “cure” other than to relax. This made sense at the time, considering I was working in a new state that summer, away from home. But a part of me knew that this was most likely genetic.

When my mom called later that evening to check-in, I asked her about gray hair in the family. And sure enough, there was plenty of early development. Great, I thought. No one said anything for the remaining summer, so I pretty much forgot about it. It wasn’t until the school year rolled around that I started receiving comments about my abnormal growth.

I was in science class when a fellow classmate (I honestly can’t remember her name, so I will refer to her as Susan) did a double-take, before lurching toward my head, exclaiming, “EMILY! Do you have gray hair?”

My first instinct was to sucker-punch her out of surprise, but I remained calm and politely responded, “Yes, Susan, I do,” before wrangling my hair into a ponytail.

“Do you want me to pull it out??” she said, almost salivating.

“No, thank you,” I responded, gradually becoming more insecure.

I awkwardly laughed in response to her eagerness, not really recognizing how I felt about the situation. Occasionally over the months, a passerby or table mate would  point out my gray hairs, and interrogate me about why I hadn’t “done something about them.” I’m certain these people meant no discourtesy, but the comments began to wear on me a bit.

After doing some extensive research, I self-diagnosed myself with a Biotin deficiency, which can lead to early-graying. I started taking supplements and changed my shampoo, but because the situation was genetically-induced, I saw little change. (I will say, though, the graying has slowed dramatically over the past year.)

Despite my efforts to hide them every morning, the comments kept coming. Curiosities of why a 17-year-old had gray hair, offerings to pull each one out of my head, and criticism of not having dyed my hair became normalcy. It wasn’t, and still isn’t that big of a deal, but when people continuously touch on a part of you that’s insecure while insisting you do something about it, can take its toll.
The toll was more unconscious, though, considering I mostly experienced my insecurities through dreams instead of during the day. I’d picture myself staring in the mirror, watching my head turn completely gray in a matter of seconds, before waking up to my standing brown hair.

Part of my insecurity stemmed from the common fear of simply getting old. The phrase, “you’re not getting any younger,” visually hit me hard—and sooner than I’d expected.

But that’s for me to deal with, and not for someone to point out. And if you do, please do not chastise me for it, or put your hands on or near my face, insisting to pull them out. (This has happened more than it should.) When a person has lettuce in their teeth, do you offer to take it out for them? If a person has dirt on their pants, do you smack their ass? I hope not.

The same should go for when you notice a teen with grays. If you feel the need to do so, politely mention it to them, or even give them a compliment for being unique. Just don’t do the equivalent of smacking their ass or picking their teeth and place your hands anywhere near their head.