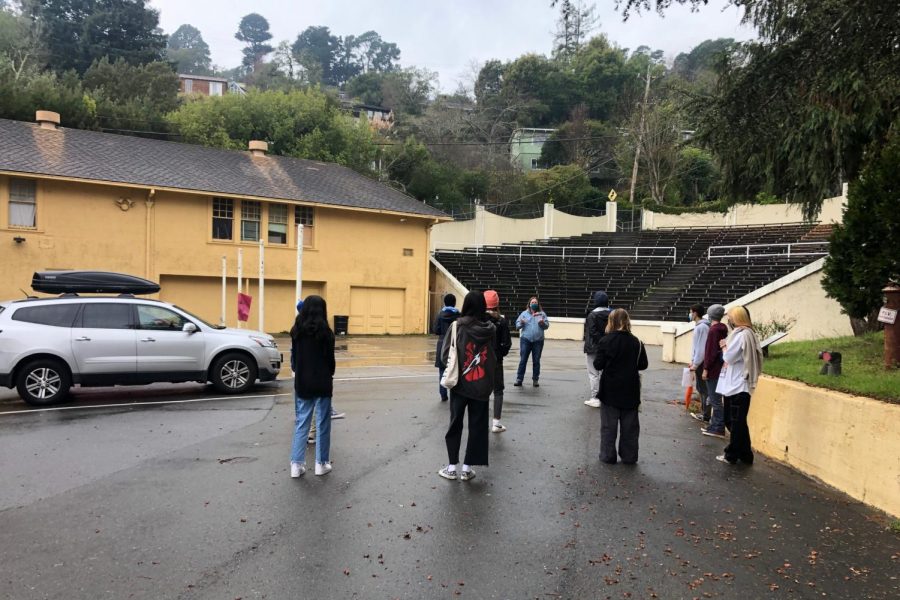 The freshman class of 2024 participated in their first tour of Tam’s campus led by Link Leaders Jan. 6 through Jan. 8. Students were on campus for approximately 75 minutes following arrows placed on paths throughout the multiple buildings and common areas. The tours were conducted in preparation for an expected return to campus on Jan. 6 which has since been postponed indefinitely.

“Everyone has the nightmare about showing up to a new school and walking into the wrong room,” Link Crew advisor Abbey Levine said. “When students are lost and don’t know where to go, that’s more time of students aimlessly wandering, perhaps bumping into other students, and that is not safe, in terms of health and Covid[-19] transmissions.”

Many Link Leaders involved in the tours hoped that getting freshmen familiar with campus would make for a smoother transition to hybrid learning.

“Navigating the Tam campus can be pretty daunting to incoming students, so the main goal was to help the freshmen be able to find their classes,” senior Abby Alpert said. “I hope these tours gave the freshmen a better understanding of campus, since they already have their schedules, than the typical freshman orientation tour.”

For many new students, the Link Crew tour was the first time they had been on campus despite starting classes in August. Freshmen were eager to participate after being unable to engage in the traditional student orientation process.

“My Link Leaders were super helpful with answering any of our questions, and they did a great job touring us around the campus,” freshman Lyla Macrae said. “I think that the Link program is a great way for freshmen to be introduced to Tam, and it is also nice to know some upperclassmen, like our Link Leaders, in case we need to ask them a question.”

Students were given gift bags containing fuzzy socks, hand sanitizer, sudoku puzzles, and a ticket to a Tam gear raffle as part of their welcome.

The tours are the latest activity conducted in an attempt to engage new students despite online learning. Link Leaders have conducted events throughout the year such as baking, tie dye, Bob Ross painting, and The Office watch parties. Link Crew has hosted around 30 Zoom events for freshman this year, according to Levine.

Despite these efforts, many Link Leaders have found it difficult to connect with students while online.

“The experience this year is much less rewarding. Zoom is awkward, even with people that you know well, so taking a group of 10 random freshmen and sticking two or three juniors and/or seniors in the mix makes the whole dynamic feel super forced and awkward,” Alpert said. “It’s just been frustrating to not have a strong connection with any of them, but at the same time, I can’t figure out how that could have been different.”

Students can also easily avoid interacting with their Link Leaders by turning off their cameras or not attending advisory periods.

“It has been very difficult being a Link Leader online, especially with hyping up the freshmen and getting them excited,” junior Kendra Weisman said.

Mandatory Support (formerly Tutorial) has also been organized by English class rather than advisory group. As a result, freshmen must leave their Mandatory Support Zooms for infrequent advisory meetings instead of Link leaders meeting them in their class. Link Crew teacher advisors agreed that it was more important to put students in Mandated Support based on their classes rather than advisory group to help them build connections with classmates, according to Levine.

Link leaders feel this has been another barrier to overcome while trying to befriend their advisory freshman.

“Since our only contact is during advisory (about once a month) it has been hard to establish a bond within the group,” Alpert said. “No matter how enthusiastic I try to be, it just is not the same.”

Despite these difficulties, Levine is optimistic that incoming students will eventually become more comfortable on campus over time and is planning on making a virtual tour for students who were unable to attend in-person.

“Even in the time of a budget crisis and when there’s a lot of challenges, there’s still a lot of support for student activities that help people feel connected,” Levine said. “I feel really lucky that Tam is a place that recognizes the value in building community… This is a school that says ‘community is important’ and they put resources behind the work that we do and they really support the ideas that we have and the energy that we have, because it is really, really important.”