My Phobia of Teenage Drivers 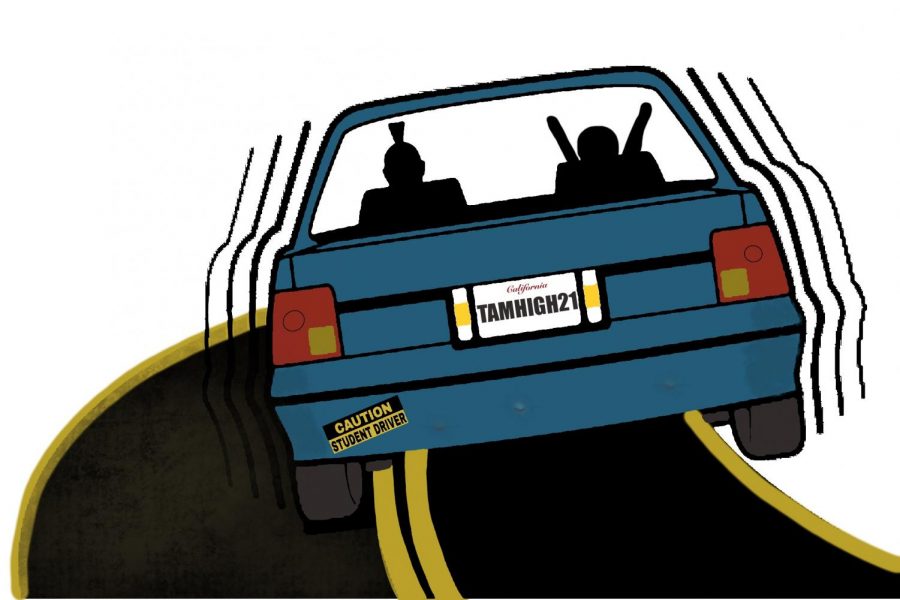 Being in a car with a fellow teenager who thinks they’re the next Dominic Torretto to hit the streets of Mill Valley is terrifying. There is no way a 16-year-old can be as good a driver as they think they are. I’m most definitely not an expert on this topic, as I myself don’t even have a permit. Driving is scary. Knowing myself, if I were driving on the windy roads up on Mount Tamalpais or Highway 1, I would probably accidentally drive off a cliff. I do not whatsoever trust myself or any other teen to maneuver a couple-thousand-pound hunk of machinery and metal.

However, this does not stop me from repeatedly receiving rides from all my friends. Due to this, I am constantly the passenger and am left in a perpetual state of terror. This fear is not unique to me; this is not a made-up phobia. Considering the statistics on teenage driving and car accidents, I think I may have a point. According to the AAA Foundation for Traffic Safety, drivers who are from the ages 16 to 17 have the highest crash involvement rate, the highest rate of injuring themselves as well others, and the highest rate of killing themselves and others. At 16 years of age, we are able to taste our first bit of adulthood and maturity through obtaining a driver’s license. Mill Valley seems to be a bit of a car town due to the inability to walk or bike anywhere unless you have more athletic endurance than I do. This means most teenagers here drive out of the need for transportation. Unfortunately, this is an age where our grasp on death and mortality is not yet fully formed. Getting your license is considered a milestone for teenagers growing into adults and who are, of course, warned by countless community members of the consequences of not listening to or abiding by the rules. But it’s difficult to listen without some experience of the severity of what could go wrong. The thrill of going at a high speed and the feeling of danger tends to overpower the sense of dread for most people.

I too once truly enjoyed zipping through the town, listening to loud music in a car. But after falling out of a car while it was in motion, not so much. Thankfully, I walked away basically unscathed from the incident with a couple of injuries that healed fully in a matter of months. Despite this, I don’t know if I will ever regain that sense of fun while in a car. While laying on the concrete, all wounded and bloody, I couldn’t stop thinking about my own stupidity. I don’t want to say it was a huge life-changing event. It wasn’t. However, at this point, I finally grasped how painful falling out of a car might be, how painful getting into a car accident, and how easily it could happen to anyone.

Adolescents are able to understand the danger but not the implications of it. With the number of teenagers out on the road, the responsibility to not crash and hurt yourself and others cannot be placed solely in the hands of police and mindful parents. I try not to generalize all teenagers in Mill Valley. I am sure there are many well-equipped, responsible teenagers driving around. However, from my personal experiences, there are not enough. This is not solely a problem of a lack of practice, but a problem in attitude. So many teenagers have this sense of bravery and confidence, which is a good thing to develop at this age, but it needs to be countered with more sensibility and grounding. Many drivers, if not most, like to think that they are somehow superior at it to others. If you are a teenager, you probably aren’t that great at driving, and the statistics back me up. Skill level, however, does not mean it is okay or safe to ignore safety and traffic rules that are in place for a reason. I don’t care how supposedly great you are at driving. If you get in a car crash within a year of driving, you probably should brush up on those basic skills.

Nevertheless, I continue to get into cars with teenagers, because how else am I meant to get around this town? I hate biking, I won’t walk anywhere and we barely have any forms of public transport. So I suck it up and become a hypocrite, grasping hard on the door for dear life if we go anywhere above 30 miles per hour.

During more normal times I walk to school and home every day. It’s a short walk. I live close by so it shouldn’t be too hard right? Wrong. I do not know how it’s possible somebody has not been hit on Almonte, behind Tam High. When I wasn’t jumping off the road to get out of the way of a student who was speeding at 8 a.m. on the way to school, I was carefully trying not to get smashed to pieces by the many cars pulling in and out of their basically non-existent parking spots. I genuinely think my life expectancy has reduced due to the amount of stress it has given me every day during that five-minute walk.

I don’t want to die in a car accident. I imagine most people would agree with me. I also don’t want to see my friends die in a car accident. I don’t want to have to go to any funerals for a high schooler because they made a little mistake while going fast in a car. That’s the thing though; it’s that easy and common to get into a car accident. This is not at all an attack on my fellow Tam High students who have driver’s licenses. I understand the freedom that comes with the ability to drive, as well as the real need for it as a means of transportation. I believe that with more training and practice on the road, teenagers will be better equipped to understand how not to kill themselves and others in an auto accident. Your rush of adrenaline should not come from an action that is potentially deadly to yourself and every single other person out on the road.