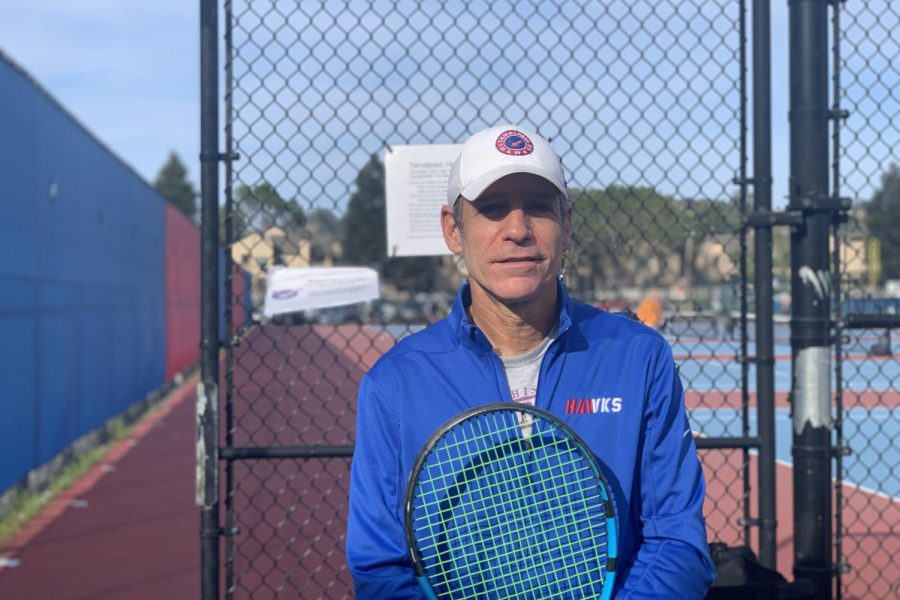 Tam class of 80’ alumni Russell Byrne has returned to Marin after 40 years and taken up the position of head coach for girls varsity and junior varsity tennis. Fresh off three consecutive championship wins at High Point Academy in Pasadena, Byrne is ready to focus his efforts on coaching players at Tam.

“My blend of development and performance is that I want to be in the mix for the championship every year, but if I have a choice to just barely get into the tournament while developing the end of the bench, I will do that,” Byrne said. “It’s not just about championships with me … [I want to] spend significant effort on development so that we have a strong team year after year.”

Although first certified as a tennis instructor in 1990, Byrne has spent most of his time working as a data architect at Cisco Systems. However, with a top 60 national ranking for his age group, 50 years experience, and a tennis-themed license plate, Byrne knows his heart truly belongs to the sport.

“I still say ‘that’s what I want to do when I grow up’,” Byrne said. “Helping to make somebody better [is the best part]. It’s a thrill when you have someone with even a little bit of talent, who can really run with the pearl of wisdom you might give them. I really get a kick out of making just a small adjustment to someone’s technique and seeing it instantly get better.”

After accepting the position of head coach of the girls’ tennis team, Byrne established a series of goals for the program. He started with setting up ball recycling stations on both ends of the court to reduce waste of balls, ball containers, and miscellaneous trash.

Byrne is also hoping to set up a nonprofit in the future for community outreach to Marin City, something he has been passionate about since his adolescence.

“I’d ride my bicycle over to Marin City with a shopping bag full of balls and a couple of rackets, and I just showed up on that court [and] taught whoever showed up for an hour on a Saturday morning … [I plan] to do something like that on a bigger scale,” Byrne said.

Byrne is putting more emphasis on conditioning and strength training, seeing as tennis has become more “gritty and hardcore” in recent years. Taking notes from water polo, Byrne set up eight strength training strap stations and frequently implements jump rope and agility drills into practice. He even participates in many workouts to increase the team’s motivation.

Both Byrne and boys tennis head coach John Garber are focused on creating “athletes who don’t miss,” a saying which, according to Byrne, describes a team full of physically fit athletes who play tennis strategically, knowing which situations call for swinging hard or simply keeping the ball in play.

To accommodate the magnitude of the job, Byrne has created meticulously organized systems, including a spreadsheet with over 30 columns and a challenge process set up on TeamSnap, which keeps track of players’ rankings on the ladder.

Byrne also created a code of conduct for his players to follow for proper sportsmanship.

“I’ve seen some issues with conduct [in the past] … It’s more things like taunting or sportsmanship issues. Celebrating an opponent’s mistake rather than your own success … I authored a couple code of conduct rules to add to the code we already have from the department and the school,” Byrne said.

COVID-19 has greatly reduced his first season coaching at Tam, however Byrne is still determined to help his players as much as possible.

“My passion has been tennis my whole life, since I was about eight years old,” Byrne said, “This year it’s not as intense in terms of the competitive aspect. It’s more about just getting the players out to play.”