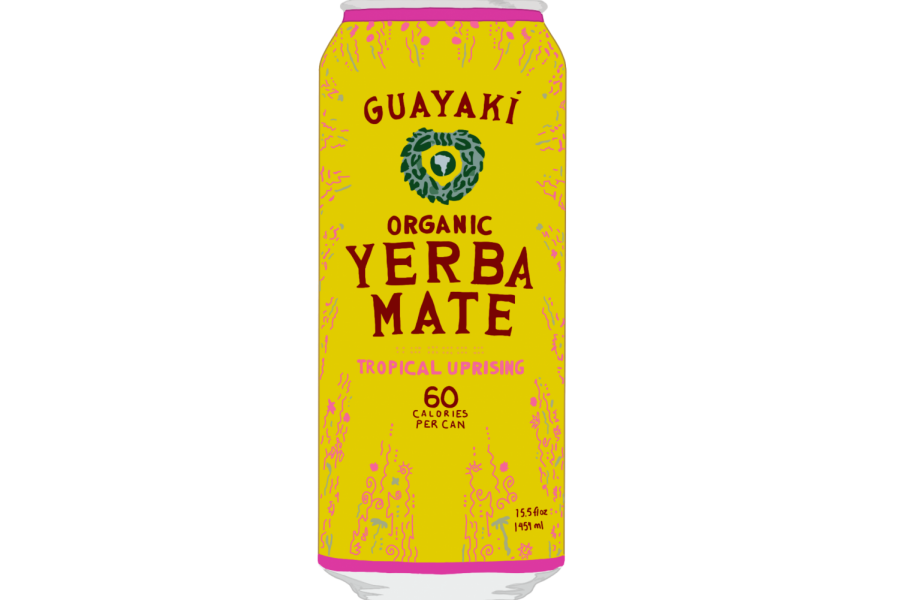 Marin’s teenage population has an absurd fascination with Guayaki Yerba Mate beverages. Packed with 150mg of caffeine and an average of 28 grams of sugar, you’ve most likely seen a can (or three) in the hands of a high schooler on the way out of Safeway during lunch. If you’re a Tam student, chances are you’ve arrived out of breath to the Yerba Mate-designated refrigerators in the self-checkout aisle, only to find your favorite flavors mercilessly pilfered and only Lemon Elation and Orange Exuberance remaining (who even drinks those flavors anyway?). Or maybe if you’re a die-hard Guayaki fan, you know the three different sections of Safeway where you might find your precious “yerb” (in addition to the self-checkout refrigerators, there are some in the large refrigerated drinks area, and they can also be found in a random aisle at room temperature if you’re really desperate). At one point you’ve probably weighed the outcomes of sprinting to Whole Foods with ten minutes left in lunch just so you can get a sip of the liquid gold that is a Yerba Mate. Maybe you’ll be late to third period, but hey, it’ll be worth it.

For Guayaki’s 25th anniversary in February, the company introduced a new flavor, Tropical Uprising, to their line of “High Energy” 16 oz drinks. This, of course, prompted Tam’s caffeine-loving students to rush to the grocery stores, eager to get their hands on a can and share their opinion. Admittedly, I am one of those students.

The initial attraction of Tropical Uprising for me was its surprisingly low sugar content— less than half of all the others in its category with a whopping 11 grams of sugar per can. The title is somewhat off-putting (I understand the flavor is supposed to be tropical but … uprising? You can do better than that, Guayaki), but considering the stronghold, Guayaki’s flavors have on my generation, the poorly selected name didn’t stop me from wanting a sip. After sitting on my couch watching The Office in sweatpants for an entire year, I threw on my Birkenstocks and dragged myself out of the house to Safeway, where I bought a few cans of the highly anticipated flavor and fled the store before I could run into anyone I know.

If I had to describe my Tropical Uprising experience in one word it would be … disappointing. After reading the impressive list of fruit infusions that this drink consisted of (hibiscus, mango, pineapple, guava, and apricot), I expected the flavor of paradise to hit me right in the tastebuds with that first sip. The initial taste isn’t bad at all— I definitely got that tropical feeling— but after a blissful moment of pineapple and hibiscus with notes of apricot, I found myself wishing more than anything in the world that I could get rid of that sickening peach aftertaste. To be honest, I have never been a fan of peach-flavored drinks, because they almost always end up tasting medicinal and strange. That being said, I would have been completely tolerant of a hint of peach mixed with the hibiscus and pineapple, but the peach only appeared in the aftertaste like an entirely separate drink that I did NOT sign up for.

Aside from the unwelcomed aftertaste and questionable name, Tropical Uprising certainly hits the mark when it comes to exotic, summer-y flavors. The main flavor of the drink is just sweet enough and successfully satisfies taste buds. If I were immune to aftertastes, this beverage would certainly make the top of my list. However, I am still recovering from the nausea I got from the overwhelming peach at the end of every sip.

Tropical Uprising didn’t live up to the hype, but maybe for Guayaki’s 50th anniversary, they’ll come out with a flavor that truly wows all of us. But for the time being, I’ll be sticking to Enlighten Mint and Sparkling Cranberry Pomegranate, dreaming of the days when we can all fight over the last Yerba Mate at Safeway during lunch.