The Tam News • May 26, 2021 • https://thetamnews.org/22121/sports/varsity-baseball-defeats-mc-with-a-last-minute-home-run-by-parker-falzone/ 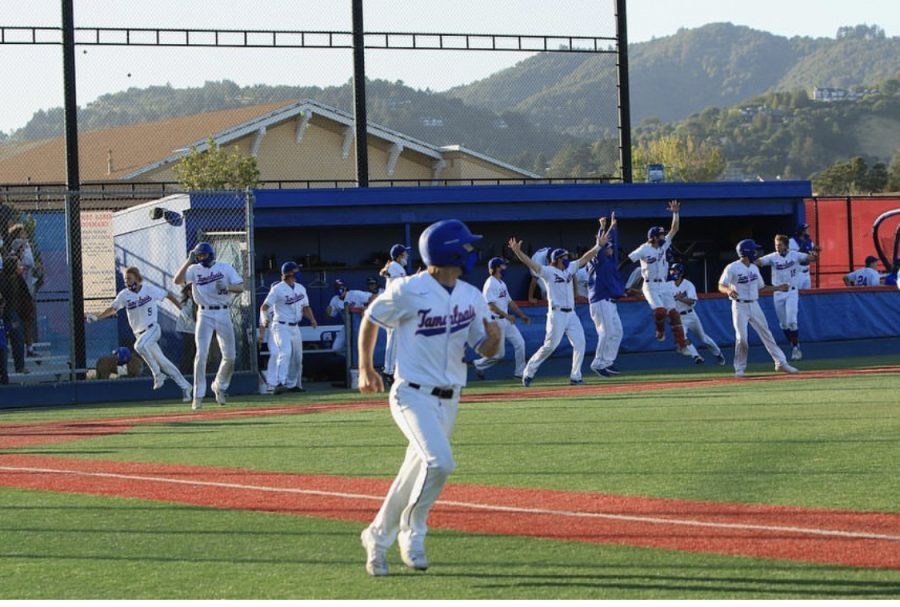 Falzone running to first base after his hit at bat. (Courtesy of Parker Falzone)

The varsity baseball team played Marin Catholic for the third time this season and won with a last-minute two-run home run by senior Parker Falzone on May 7.

Despite the score gap and limited time left, head coach Nathan Bernstein was confident in his team’s ability to bounce back, “With this team, I never expect us to lose so even if we are down by a crazy amount, we’ve come back every single game; the only time we lost was at somebody else’s field, so when we are the home team I always expect to win.”

And true to Bernstein’s word, Tam did have an incredible comeback. In the bottom of the seventh inning, senior Tucker Bougie hit a two-run home run making the score difference only one run, 7-6. “It felt great [to score the home run]. … I was confident in the guys behind me to keep on having good [hits] at bat and get on base so we could win,” Bougie said.

With only one out of three outs remaining and a pinch-runner, sophomore Carson Frame, on first base, Falzone stepped up to bat.

“Tucker hit that two-run home run and I was like ‘This is it, game is over’ … They weren’t winning from that point on so I was so confident after that,” Falzone said about the moment before batting.

The Marin Catholic pitcher pitched Falzone three balls, allowing Frame to steal two bases and advance to third base. After only one strike, Falzone hit a high ball into left field that went over the fence and earned Tam a two-run home run, securing Tam a triumphant victory at 8-7.

“Well, it was definitely the moment of my life. Basically, I was so focused; I was just trying to hit the ball and then I saw it go over the fence and I was just livid, I was like cloud nine and I was just happy we got the win,” Falzone said.

Bernstein was just as confident in Falzone in that moment, “He’s a phenomenal player …  It’s been really cool to see Parker grow from a little sophomore into a little senior with a lot of power. But he just puts in a ton of work and is a great kid so he’s the one I wanted up in that situation, and he just came through so that was pretty cool.”

This win helped the team with their Redwood series, of which they swept all three games, including the unofficial MCAL championship on May 13. “[This game] was the catalyst for going into the Redwood game and so to win two against Redwood this week [and] to win a championship was pretty cool,” Bernstein said. “This group of seniors deserves all the credit they are getting and more.”

“I do not remember much after I threw the last strike to win MCALS. It was a crazy feeling right after, I was just trying to get everyone to dogpile (which we did successfully),” Bougie said. “Everyone deserves to get their own banner this year because everyone played a huge role in winning us an [MCAL] championship. Our chemistry was just off the charts good. We were resilient, hard-working, energetic, and overall built different.”