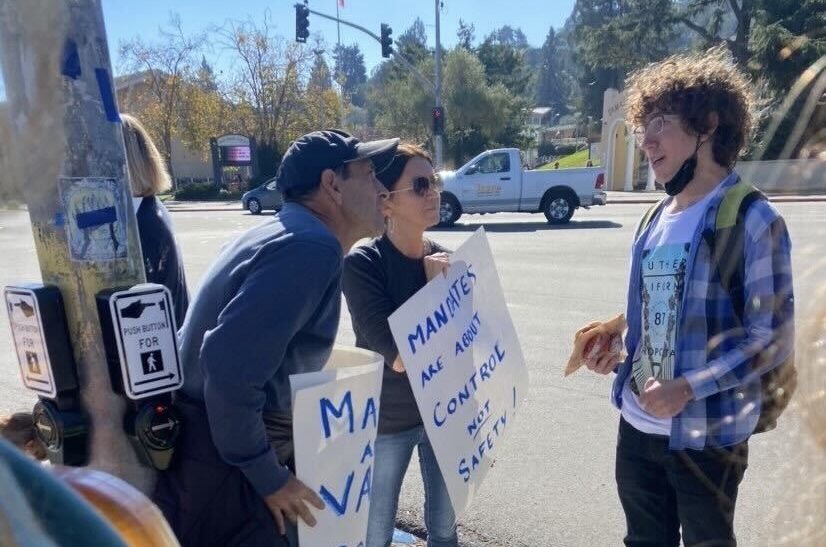 During lunch, five to ten adults stood along the crosswalk directly in students’ way to the general Safeway area with signs reading, “Don’t jab our kids” and “Mandates are about control, not safety.” Standing around the protesters was a semicircle of Tam students, some just watching the scene, others attempting to engage.

“I just went up to one of them and started talking to her,” junior Yonatan Paz-Priel said, explaining that he tried to interact by asking the protesters about their motives. “They started delving into some wild conspiracies about how there’s nano gel that communicates with the 5G and how Bill Gates is going to enslave the human race. One of the [protesters] was holding up his sign, and some kid just grabbed it and ran.”

This is not the first time anti-vaxxers, people who oppose vaccination, have staged a protest in Marin County. On May 18, anti-vaxxers spent 90 minutes before the Marin County Board of Supervisors meeting challenging the district’s support of student vaccination, as reported by the Marin Independent Journal.

“There is definitely a small and very vocal minority of people who may see this as some kind of plot or conspiracy, and we’re hearing more and more from that group,” Dr. Matt Willis, Marin County’s public health officer, said to the Marin IJ after the meeting.

The Mill Valley protestors’ signs referred to the Covid vaccine as “the jab,” a term commonly used by those in anti-vax circles to promote their beliefs while avoiding censorship.

Some Mill Valley residents have used the term on NextDoor, a community-based social media platform, in order to express their anti-vax beliefs. One Tamalpais Valley user wrote, “When the majority of this country refuse the jab, you can bet there’s a good reason. The reason is trust. [Anti-vaxxers] don’t trust the government.” They then went on to say, “I frankly think this jab will eventually do more damage than the virus.”

Marin County has one of the highest percentages of vaccinated people in the nation. According to Marin Health and Human Services, out of the eligible population (those five years old and older without medical exemptions), 85 percent of Marin County’s population has been fully vaccinated compared to the 62 percent of Californian residents and the 59 percent of Americans.

In Marin County, there have been over 245 Covid deaths, and 18,342 confirmed cases to date sourced from data provided by The New York Times and Our World in Data.

At this point, the country has argued about vaccines for so many months, and there is a sense among some that people are already entrenched in their opinions and dialogue is impossible. “I realized no matter what I say, it’s not going to get through. They’re not going to listen. So I just walked away,” Paz-Priel said.