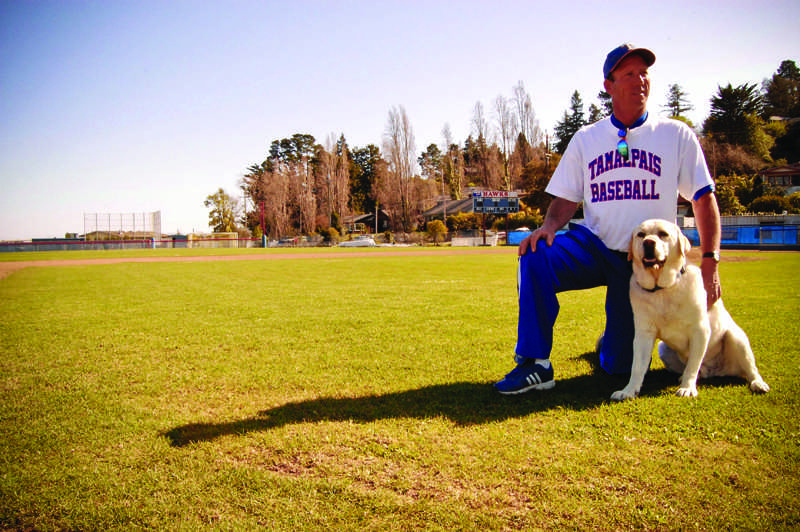 Varsity baseball coach Mike Terry and Coach Schmidty enjoy and afternoon at the field before practice.

Baseball managers have often been labeled as very passionate. Tam’s manager Mike Terry is no different, but he also brings something unique to the table: his best friend and trustworthy assistant, Coach Schmidty. The unique thing about Coach Schmidty is that he isn’t actually a person. He’s a yellow Labrador retriever. Schmidty shows up every day, rain or shine and, surprisingly, he really does have an important job do do.

Whenever students pass by the baseball diamond, they can see Terry working endlessly to manicure the field, fighting an uphill battle against perpetual weather damage. Schmidty is always there with him, and loves to snoop around, finding the best sunny and shady spots that he has grown accustomed to after endless hours on the diamond.

These two companions have been through a lot. Terry originally acquired Schmidty in Kansas, and named him after former San Francisco Giants pitcher Jason Schmidt. Surprisingly, and unfortunately, Coach Schmidty has been more injury prone then the star pitcher. “He has had cancer, pneumonia and three leg surgeries,” Terry said.

All this hasn’t stopped Schmidty from doing his job, though. He still loves coming to the baseball field to soak up the sun and act as measuring stick for the confidence that a player has in his arm. “I use him as a tool. When the boys are throwing with each other and he walks by, I see who stops throwing because they don’t have the confidence in their arm,” Terry said.

Some might expect that having a dog at practice would complicate things, but Schmidty barely gets in the way and loves coming to the field. “He’s been known to steal a glove or two, but that’s good conditioning for the kids,” Terry said. Schmidty uses the field for exercise and will get jittery if he stays home. “I’ll keep him at home on game days unless we are in a slump or really need a win,” said Terry.

Terry is big fan of the cliché: A dog is a man’s best friend.