“Seven Psychopaths” is a Great Combination of “Adaptation” and “In Bruges” 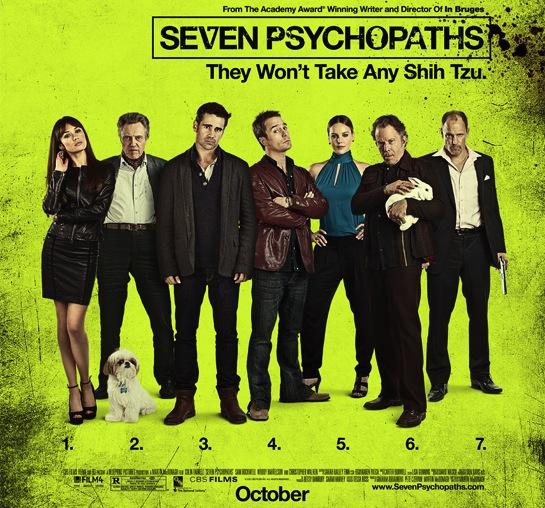 From the very first scene of “Seven Psychopaths,” the new film by Martin McDonagh (“In Bruges”), you can sense some of the films that inspired it. It opens with a scene very reminiscent of early Scorsase films, like “Goodfellas,” where two mafia henchmen discuss shooting people in the eyeballs as they wait for their target. A masked man approaches from behind and guns them both down, and drops two jack of diamonds playing cards at their feet and running off. Text comes up on the screen; “Psychopaths No. 1”

Marty (Colin Farrell, whose character shares the name of the actual writer and director) is a struggling alcoholic screenwriter living in Los Angeles, who is writing a screenplay coincidentally titled “Seven Psychopaths.” His friend Billy (Sam Rockwell), who has a dog-kidnapping business with Hans (Christopher Walken), tries to help Marty write the screenplay, suggesting ideas for psychopaths and even placing an ad in the paper for any psychopaths to bring by their stories. Meanwhile Billy has kidnapped the dog of local psychpath Charlie (Woody Harrelson), whose men were killed by psychopath No. 1 and whose girlfriend Billy has been having sex with. This is only the start of the many twists, turns, and methods that the movie uses to connect everyone to each other, and is just one of the ways that make the movie so smart and fun.

Over the course of the movie Marty collects his psychopaths, developing the screenplay (similar to the way “Adaptation” is about a man writing the screenplay of the movie we’re watching) while Charlie tries to hunt down the men that stole his pet Shih Tzu. Along the way we get glimpses into what Marty is writing with some fun, over-the-top gory sequences. This is not a movie for the squeamish: you’ll see men slice their own throats or be cut open with hacksaws. It’s a movie about violence and the never-ending circle that revenge takes people on.

The screenplay is hilarious and smart, even better than McDonagh’s debut film “In Bruges” (which also starred Farrell). The entire cast is at the top of their game here. These are the kinds of movies I want to see Farrell do more of, not boring remakes like “Total Recall” and “Fright Night.” Walken is fantastic as usual, and Harrelson is always wonderfully on edge. However the biggest standout by a large margin is Rockwell, who is high energy and crazy for the entire film, helping to propel it along at a great pace.

If the film has any faults, it addresses them to an extent with its screenplay within the screenplay, which is almost too clever. For example, there are two female characters in the film (Abbie Cornish and Olga Kurylenko) who you see on the poster, in trailers, but do absolutely nothing in the actual film. However, in a scene where Hans reads Marty’s screenplay, he points out the exact same thing, acting as a sort of commentary to how this is in most films. However, it still would have been better to expand those characters.

“Seven Psychopaths” isn’t the movie you’re expecting it to be; it’s even better than that, a madcap, reckless, alcohol-fueled ride through the LA landscape, full of insane characters bursting off the screen.