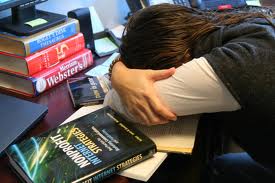 It is the end of the year and grades are on the line. Most students are sitting at home, stressing over their final assessments, worried of failure. But I look over my math binder, the units where I excelled and the ones I failed, and see an opportunity. An opportunity to redeem myself, to learn and to succeed. Finals? I can’t wait.

Most students, no matter what classes they take or what grade they are in, share a dislike of these tests. A wide spectrum of content, significant weight in the class grade, and great length, are all factors of finals that lead to the omnipresence of stress. People that are normally happy-go-lucky are often seen anxious or worried and people that are normally stressed out can’t even function. The entire situation is uneasy; people are out of their place, they are distraught, and not themselves, but has anyone ever looked at the benefits of finals? Yeah, they cause a lot of stress and count a lot toward your grade, but isn’t this looking at the glass half empty? My approach, although unconventional, is one that is much less depressing.

With a large spectrum of content, finals are often seen by students as the teacher’s last chance to cut down their grade, but the reality of the situation is just the opposite. They give kids a chance to prove what they have learned over the course of the semester, not to prove what they have forgotten. The multitude of topics provides an opportunity to show that, despite perhaps missing some assignments and not participating as much as possible, you have actually learned and understood the material. Spanish teacher Susan Smith, who gives a three-part final, agreed that a wide spectrum of content sets kids up to learn and succeed. “Finals provide students with the best learning opportunity of the year because they give a chance to reflect on previous ideas,” she said.

Another stressful aspect of finals is their significant weight. Around this time of year students are often found complaining about this factor. They claim that the value of the final assessment does not match up with its weight, but their argument is far off base. Re-capping the content from the entire semester, finals are actually the best measurement for how much a student has learned. For this reason Finals have the right to be worth something like 10 percent of the grade. In other countries such as India, final assessments are worth close to 80 percent, so we have it easy here in the US. In addition, finals are supposed to be an opportunity to boost your grade, and this is only possible if the test counts for a good chunk of the class. 10 percent is really the bare minimum weight for the final to have an impact.

Another universally despised aspect of finals is their excruciatingly painful length. One and a half-hour classes already strain students’ attention, but two-hour final periods seem like a lifetime. Many students complain about the long period, but they disregard the fact that a shorter period would create more adversity. Less time would give students no chance of finishing. To compensate for this lack of time, teachers could be forced to shorten their finals. This may seem favorable, but would actually make the task more difficult. It would make finals just like another test, and would you really want to leave 10 percent of your semester-long grade to something you’ve failed before? Statistics show that more points on an assessment averages out mistakes with a greater number of correct answers, thus it creates a more accurate assessment of the situation; in this case, the student’s knowledge. The long period makes finals the great opportunity they are, so no need to complain, only to study.

In the end, the goal is to learn something. That’s why we all go to school, so we can go out into the world all the wiser and ready to help society. The purpose of a grade is to accurately represent how much a student learned over the course of the semester. Kids, especially in high school, often lose sight of the foundation of learning and make grades their goal. Their goal becomes the best possible grade, so they can go to the best college. This system is overrated; the colleges told to be the best, may not be the right pick for the student. Keep your priorities in perspective. It will help avoid stress and keep you motivated for the right reasons. Finals are the ultimate measurement of the fundamental goal of learning. Instead of viewing them as a burden, see them an opportunity to redeem yourself, to learn and to succeed.