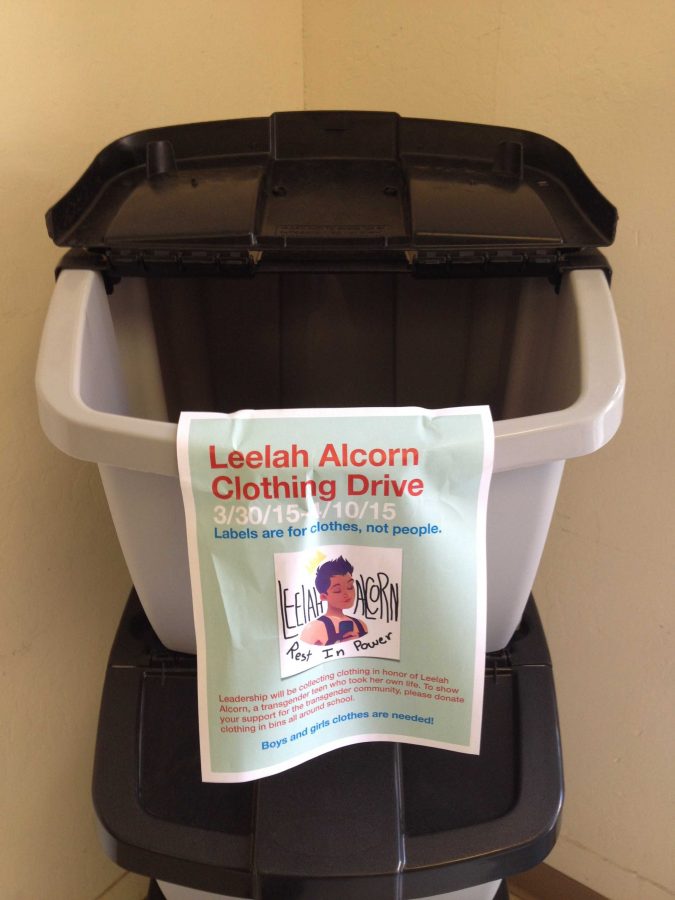 Leadership held a clothing drive from March 30 to April 10 in honor of Leelah Alcorn, a transgender teen who lived in Ohio who committed suicide in December 2014. Students could deposit lightly-used clothing into bins located around campus.

Junior Sadie Munter, a member of Leadership who helped lead the clothing drive, said that the purpose of the drive was to heighten awareness of the challenges faced by individuals who identify as transgender. “We’re collecting clothes and accessories like purses and hats to donate to Youth Space LGBTQ and the Trans Thrive Program,” Munter said. “The intention of the clothing drive is to raise awareness for the transgender community.”

Co-commissioner of the Outreach Committee and junior Audrey Romjue added that the clothing drive will give disadvantaged youth the means to succeed. “Our drive is helping [disadvantaged LGBTQ youth’s] cause by giving them resources needed in order for success,” Romjue said. “By giving them clothes, they are able to have something that they otherwise could not afford, allowing them to spend their time and money to find jobs and start their independent lives.”

Tam’s Gay Straight Alliance (GSA) is not directly involved in the clothing drive, but supports it. “After hearing Sadie Munter’s proposal, we felt like the drive would be a great way to spread awareness, as it’s important to recognize different sexualities and gender identities other than straight, gay, and cisgendered,” said GSA co-president and junior Elodie Townsend.“Transgender rights are not discussed enough, even in the most progressive forums.”

According to Romjue, the drive has already surpassed Leadership’s initial goal. “As of now, we have many bags of clothes that could definitely clothe over 100 people which is fantastic.”

Munter said, “My main goal is to get the message across that there are people our age who are struggling with and questioning their gender, and we should make our school a place where everyone can feel safe.”